A Beautiful Day In The Neighborhood Both Humanizes and Elevates Mr. Rogers - RVA Mag 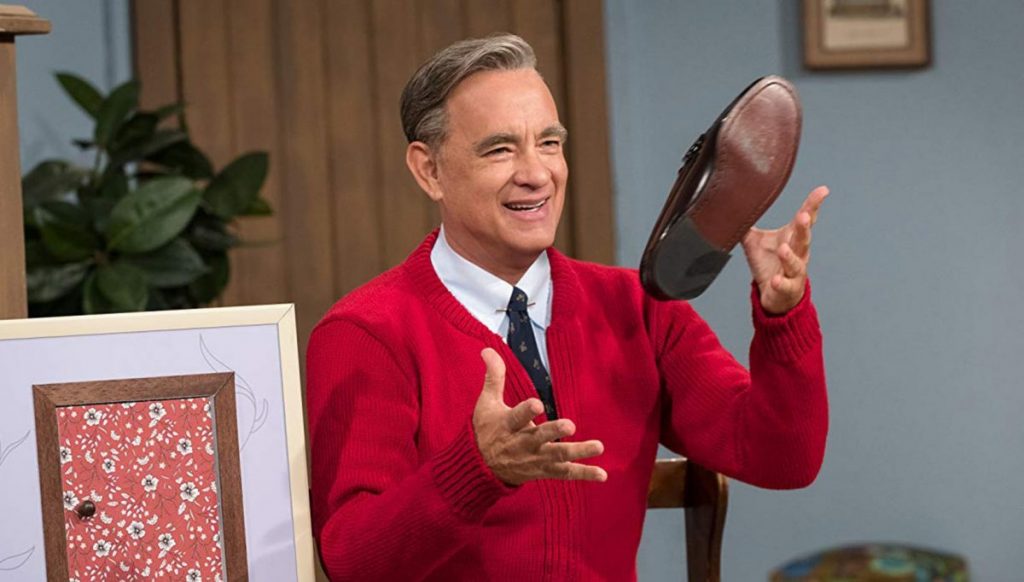 Less a biopic than an intriguing tale about a life-changing encounter between a famous television host and an embittered journalist, A Beautiful Day In The Neighborhood nonetheless captures the enduring positive spirit that made Mr. Rogers so beloved.

Mr. Rogers has a quiet serenity about him that, to the most cynical among us, could come across as disingenuous and unnerving. To journalist Tom Junod, assigned by Esquire to profile the beloved children’s television host, Mr. Rogers wasn’t just the antithesis of his own personality, but also represented the kind of open and empathetic mindset that made confronting your feelings not only possible, but imperative. Junod’s interviews with the legendary figure forced him to approach life with a sense of self-reflection, courage, and forgiveness he had never attempted before. If there is anything Marielle Heller’s new film, A Beautiful Day in the Neighborhood, teaches us, it is chiefly this: that even in the throes of cynical adulthood, we can still mend our broken spirits.

A Beautiful Day in the Neighborhood will disappoint audiences hoping for a Mr. Rogers biopic. Sure, Mr. Rogers (Tom Hanks) features heavily, but this movie is about more than Rogers. Thankfully, Heller’s eye for finding and embracing the off-kilter in the serious, as she has done in her previous films Can You Ever Forgive Me? and The Diary of a Teenage Girl, makes this much weirder and more interesting than any biopic could have been.

It its best moments, Heller recreates both the sentiment and the physical quirkiness of Mr. Rogers’ classic program to tell the story of Lloyd Vogel (Matthew Rhys, playing a fictional stand-in for Junod), a new father and journalist who slumps through life with a simmering disillusionment. Most of these feelings stem from issues with his own father, from whom he has been estranged since his mother passed away many years ago. When his sister’s wedding reunites the two, Lloyd is confronted with the hate and resentment that had, until this point, been bubbling below the surface.

Like the real-life children’s program Fred Rogers hosted, A Beautiful Day in the Neighborhood has a charming levity, even when it broaches serious subjects, and it is full of charming and interesting storytelling choices that add to this atmosphere. I will let those choices remain a pleasant surprise, but the same childlike sense of warmth and security that Mr. Rogers fans remember from his show is present throughout the movie. Even at its most dramatic, you appreciate that warmth and long for its welcome and inevitable return. In this sense, it feels like the rare adult-oriented film that has made clear, conscious, artistic decisions, rather than applied shiny affectations, to tell its story.

The character of Lloyd Vogel sometimes wanders into caricature, resembling someone you would assume had never felt anything other than deep sadness and resentment. As a personality, that uniformity feels unrealistic and frustrating, especially when the only emotion that comes to the surface is mildly tempered rage. There is no indication Lloyd can feel any other emotion until Mr. Rogers works his magic on him which, while important in articulating the precious gift Mr. Rogers has for connecting with others, makes him feel less real and more like the vessel for a message.

The assignment to profile Mr. Rogers turns out to be a godsend for Lloyd who, within minutes of meeting Mr. Rogers, is subjected to his signature brand of calm understanding, a kind that centers the internal processing of one’s own feelings so as to mend life’s pain. Mr. Rogers, whose tender and gentle essence rather than uncanny likeness is captured beautifully by Tom Hanks, takes an instant liking to Lloyd, who balks at Rogers’ sudden and intimate questions about his own life. One gets the sense that this hardened investigative journalist, who wears the exhausting effects of the profession across his face, has never had an interview turn on him like this. Lloyd takes the probing personally at first, but across multiple interviews with Mr. Rogers, he learns that the host approaches all of his relationships with this jarringly singular interest, and becomes more receptive to its sincerity.

The tenuous relationship between Lloyd and his father, Jerry, shifts when Jerry makes another reappearance in his son’s life soon after the wedding. A heated argument about Lloyd’s mother escalates until Jerry collapses and is rushed to the hospital. There, Lloyd and his wife, Andrea (Susan Kelechi Watson), confront his behavior as a son and a father, and the pain that is preventing him from moving on. Lloyd finds himself rushing to Pennsylvania to see Mr. Rogers, seeking out solace in a man who until recently had made him squirm.

It is in moments like the one described above that tap into an interesting theme in the movie. The clear and driving force of accessing our feelings, especially for men, is there, but paired with Heller’s razor-sharp interrogation of celebrity, A Beautiful Day in the Neighborhood becomes something much more interesting. Fred Rogers wears his normality on his sleeve; he takes the subway instead of a car service in New York City, and the apartment he rents in the city is unapologetically modest.

Lloyd, in all his world-weary cynicism, doesn’t comprehend the sincerity behind Rogers’ wholehearted embrace of a normal life, despite his celebrity, because it is rooted in a genuine immediacy and appreciation for the present moment. Lloyd doesn’t have that perception, and his white-knuckled grip on the past makes breaking down his barriers an imposing challenge. Because of this aspect of the plot, A Beautiful Day In The Neighborhood feels far more timely than expected. When it seems like all of the public figures to whom we are supposed to turn during turbulent times are tainted by corruption, the ones who remain unspoiled become all the more vital. Mr. Rogers’ persona on screen, one of uninhibited compassion, curiosity, and understanding, is today, more clearly than ever, one we desperately need.

Heller’s strength as a director rests in the way she intelligently explores the facets of Mr. Rogers’ celebrity, not in a way that overly deifies him, but celebrates him for the concrete ways in which he made people in the real world feel good. Yes, he could incite rapturous song on a crowded subway car, but he also practiced his own emotional management, a surprising admittance for a seemingly perfect man. Mr. Rogers is at his most endearing when he is his most human, on his way home from a long day of work, taking the subway just like everyone else. A Beautiful Day in the Neighborhood understands and celebrates that.

The excitement was as heavy as a Charizard in the Greater Richmond Convention Center. Aisles and booths of various heroes of every true... READ MORE

The excitement was as heavy as a Charizard in the Greater Richmond Convention Center. Aisles and booths of various heroes of every true... READ MORE