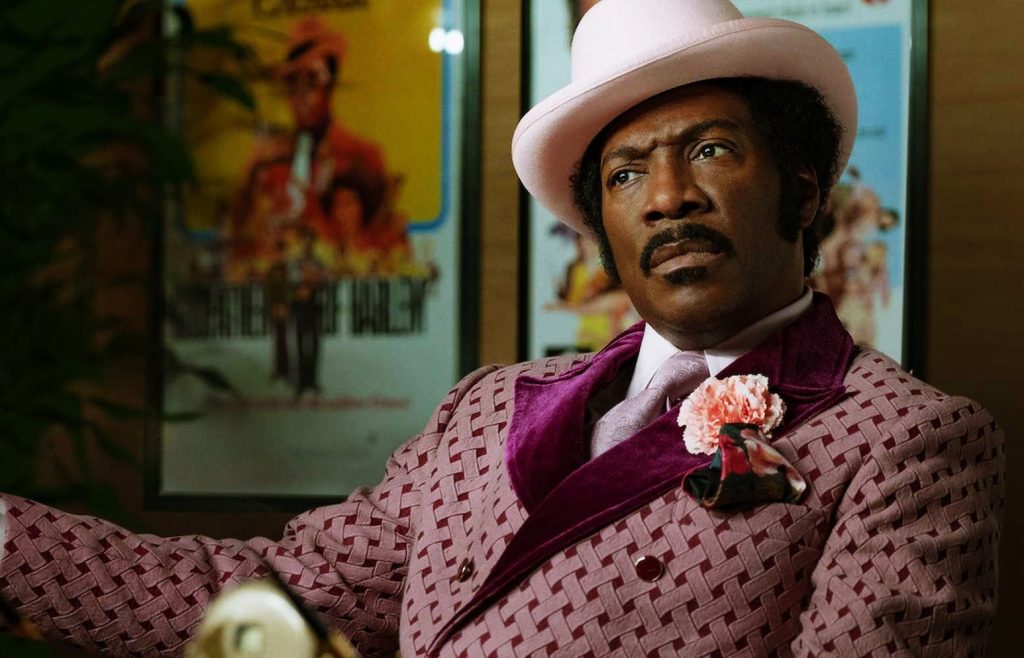 There is a scene in Dolemite Is My Name, the new Netflix film about the rise of Rudy Ray Moore and his famous persona, when Dolemite and his new friend, Lady Reed, perform a near-nonsensical song about doing all manner of outrageous, crude acts to each other. There are big smiles plastered across their faces, and their audience is doubled over with laughter. All of this underlines what is probably the most interesting aspect of this film: a joyous disregard for respectability.

Rudy Ray Moore was a nightclub comedian in the mid-20th century, who gained fame within the black community through the release of underground “party” albums featuring explicitly sexual comedy routines. Moore broke through to the mainstream after a 1975 film featuring his Dolemite character became a surprise hit.

Eddie Murphy, who stars as Moore, is a far cry at this point in his life from Moore’s humble beginnings. Murphy, who is currently only a few years older than Moore was at the time of his greatest success, has been successful since his teenage years as a Saturday Night Live cast member. His current fame and fortune from numerous successful film franchises stands in stark contrast to the bootstrap-pulling, hustling and bustling, slapdash entrepreneurialism of Moore’s later-in-life rise to fame (when 1975’s Dolemite was released, Moore was 48).

Director Craig Brewer’s retelling of this journey is slick and breezy, never dwelling for long on the negatives. It revels in the smooth 70s jazz and R&B vibrations that move its plot along. What the film lacks in meaningful conflict or struggle, it (mostly) makes up for with the genuine pleasure of the journey.

Dolemite Is My Name tracks Moore’s career, from the original creation of the Dolemite character to the world premiere of the 1975 film that bore the character’s name, his spoof on blaxploitation films of the era. The actual events that comprise Dolemite’s development, which take up at least the second half of Dolemite Is My Name, are less important than what the finished product actually means in the history of blaxploitation entertainment (expanding on the story of the blaxploitation movement’s beginnings, as told in Mario Van Peebles’ 2003 biopic of his father Melvin, Baadasssss!).

Dolemite’s character was all about sex, and using sex talk to shock his audience into hysterical laughter. There is a palpable joy on display in Moore, and his audiences, reveling in their own sexuality — something white society often demonizes black people for. It is something notably absent from the world of white entertainment, and from the personas of the few black entertainers it was willing to accept in the 1970s. Understanding this reality, Moore decides to capitalize on the regional popularity of his Dolemite stand-up act (conveniently lifted from the nonsensical stories of a homeless man who frequents his record store) by making a movie for his character.

What follows is a very easy, and rather traditional, movie-within-a-movie story. It isn’t anything to write home about. There are struggles, sure, but they’re conveniently resolved within the minute — despite the fact that some of these are gargantuan, production-halting problems. Here, though, their solutions are quick and easy: one brave film student fiddling with an electrical box, or a quick $30,000 loan, or a new order of film even though there isn’t money for it. The convenience diminishes a spectacular feat, pulled off by a feisty group of people who shouldn’t have been able to accomplish it.

Even finding a director for their pie-in-the-sky idea is accomplished in one trip to a strip club. However, Dolemite Is My Name is all the better for this discovery. Wesley Snipes plays Dolemite‘s director, D’Urville Martin, one of the few black actors who had made it in the white entertainment world. He’d previously been in Rosemary’s Baby and Guess Who’s Coming to Dinner, which was enough to immediately set him apart from the motley crew begging him to direct their fanciful project. Even if he had only been the elevator operator in Rosemary’s Baby, something he’s clearly embarrassed about, he is already their golden ticket into the business. Snipes steals the show at every opportunity, with an exasperated eye roll, a flick of the wrist, and some slippery remark in an indecipherable accent. It’s absolutely delicious to watch.

Murphy plays both Moore and Dolemite with a smooth swagger, always ready with a quip to playfully put a friend in his place, and rarely down and out for long. Moore is one of those people who’s always on, a quality some find grating. However, Murphy plays it with such sincerity that you can’t help but be along for whatever ride he decides to take you on. It’s his performance that makes watching Dolemite Is My Name such a pleasant experience.

Brewer’s film is a story of black creatives forging their artistic destinies, despite the efforts of the established entertainment industry. Unfortunately, the time he spends on developing Dolemite’s character and the making of the film Dolemite makes Moore himself feel underdeveloped. His journey feels partially sacrificed in this biopic, in order to allow his fictional character to flourish.

Dolemite Is My Name commits no real crime. Nothing about the film is bad; however, nothing is incredible either. Its portrayal of the exploits and struggles of one of the blaxploitation movement’s original heroes is sanitized, and its saccharine ending, though certainly not offensive, felt out of place. For a breezy romp through the 70s that features some of the best costumes seen on film in a long time, Dolemite Is My Name does its job well, and as a tribute to a legendary character, it excels. But as a portrayal of Rudy Ray Moore, it feels less than complete.