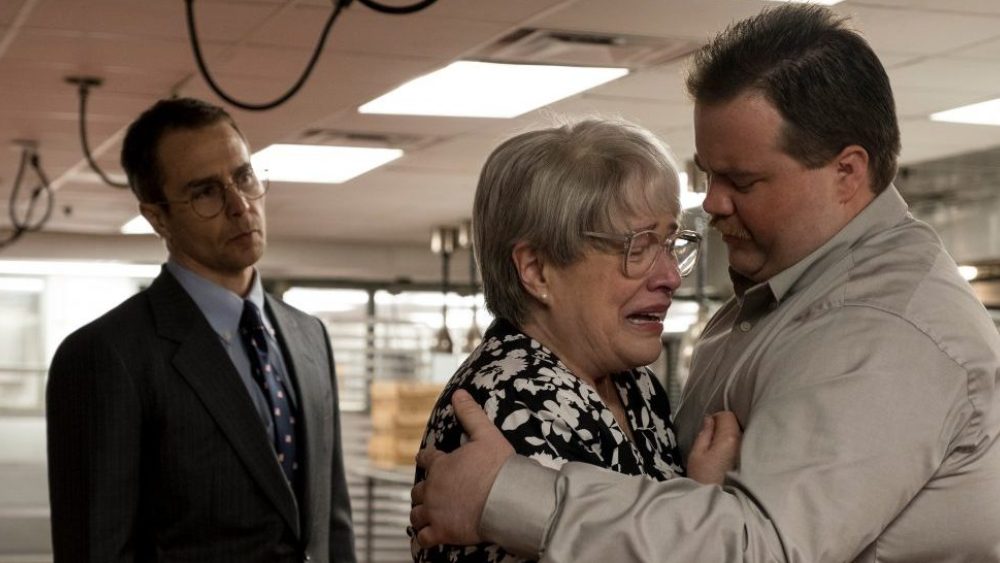 Clint Eastwood’s film about the 1996 Olympic bombing hopes to critique unjust institutions, but loses its moral authority by manipulating a true story in pursuit of an obvious agenda.

There is an exchange of dialogue in the latter half of Clint Eastwood’s new film, Richard Jewell, that distills the film’s guiding ideology. After finding out the FBI has bugged his apartment, Jewell, played by relative newcomer and surefire dramatic breakout star Paul Walter Hauser, asks his lawyer, Watson Bryant (a fiery Sam Rockwell), “How come they keep doing this, Watson?” Bryant answers, “It’s easy because you don’t matter. That’s how come.”

Eastwood’s take on the 1996 Atlanta Olympics bombing, written by Billy Ray and based on a 1997 Vanity Fair article by Marie Brenner and the book The Suspect by Kent Alexander and Kevin Salwen, essentially asks what it would look like if someone was betrayed by the people he respects the most. It’s the situation Richard Jewell found himself in, as the prime suspect for an attack he personally helped to minimize.

The night of the attack serves as a point of convergence for many of the film’s key players. We meet Tom Shaw and Kathy Scruggs, an FBI agent and a reporter for the Atlanta Journal-Constitution, respectively. Scruggs’s (Olivia Wilde) portrayal is an affront to the journalistic profession, and the point where Richard Jewell loses most of its credibility.

We are first introduced to her as she charges into the offices of the Atlanta Journal-Constitution, floozy and acerbic for seemingly no reason, most likely drunk. Later, she promises sex to her source, Shaw (Jon Hamm), for information about the Centennial Park bomber. Her characterization, specifically as it refers to her exchanging sex for information, is offensive, one-note, lazy, and, according to her friends, colleagues, the Atlanta Journal-Constitution, and Brenner’s Vanity Fair article, completely fabricated.

There is nothing inherently wrong with taking artistic license in a fact-based story. What the filmmaker must be prepared for, however, is scrutiny over the ways he alters reality. It is baffling that, in a movie about a person’s life being destroyed by misrepresentation in the media, Eastwood and Ray fabricate a backstory for Scruggs that portrays her as willing to cross every professional line to get a story, especially when it makes no difference to the FBI’s actions. His takedown of Kathy Scruggs is nasty, vindictive, and takes pleasure in a characterization that decimates good will and reeks of bad faith. And ultimately it is the film’s downfall.

Eastwood is no slouch when it comes to making movies, so while Richard Jewell is a staid, austere retelling of a major event in recent history, it is unquestionably compelling. And so it goes; when the FBI can’t immediately track down a clear suspect in the bombing, Shaw, eager to prove himself, offers up Jewell as a possible suspect. He does so after receiving a tip from one of Jewell’s former employers at Piedmont University, saying that Jewell was perhaps a little power-hungry, that authority sometimes went to his head.

Bryant became Jewell’s lawyer soon after the FBI started to mess with him, though their relationship began ten years earlier, at the Georgia Small Business Association. He is basically an avatar for Eastwood, and transparently so: he’s distrusting of both the media and the government, specifically institutional law enforcement like the FBI. On the wall in his small office hangs a poster that reads: “I fear government more than I fear terrorism.” To Bryant, the media, represented in its entirety by Scruggs, is parasitic, evil, and manipulative. And he can see right through the FBI’s amoral intentions.

In his fight to protect Jewell and prove his innocence, Bryant voices the film’s angry thesis: that the government and the media are out to get a certain type of person, an easy target that will allow them to carry on business as usual. It is a questionable stance for someone like Eastwood to take — he is a famous, respected, and wealthy conservative who likely won’t ever have to face the kind of unjust treatment Jewell had to face.

Eastwood’s experiential distance places the audience firmly in Bryant’s shoes, rather than Jewell’s. He feels everything we feel as the audience: an objective disdain towards Jewell’s treatment, and an established cynicism towards the media and law enforcement. Unfortunately, this identification with Bryant infantilizes Jewell, makes him a victim of his own blind devotion, and shames him for his reluctance to fight back.

Nowhere is this more obvious than when Bryant drags Jewell to the offices of the Atlanta Journal-Constitution to confront Scruggs for her portrayal of Jewell in the paper. It’s gross on two accounts — in that it, again, indicts the media as corrupt and parasitic, ignoring the fact that, fabricated sexual favors aside, Scruggs was just doing her job with the information she was given; and in that it paints Jewell as a helpless child being strung along by a frazzled guardian.

All this is not to say Eastwood doesn’t have the right to tell a story about the injustices Jewell suffered by the media; that we as an audience cannot feel righteous in our anger towards the FBI’s cruel, heavy handedness; nor that we have to feel guilty for our anger towards both of these institutions’ seedy entanglements. What Richard Jewell does tell its audience, though, and what Eastwood unabashedly admits through Bryant, is that only a certain type of person is deserving of redemption, and those people need the guiding hand of a principled outsider, like Bryant, like Eastwood, to tell them how they’re being taken advantage of.

In an unfortunate way, Richard Jewell feels right at home in 2020. It reeks of the insincere posturing one would expect from someone who feels indignation towards systems of power, but never personally experiences their wrath; the kind of person who proclaims his grievances towards a Democratic government to an empty chair at the Republican National Convention. The irony is that the systems the film puts on the chopping block don’t go after the Richard Jewells of the world; at least, not in 2019. And it’s because the man at the head of these institutions today uses all of that power specifically to go after people who don’t look like him.

Richard Jewell feels like Eastwood’s last-ditch effort to crystalize his place in filmmaking canon as a vigilante against injustice. It recalibrates this narrative for modern times, swapping the dusty, hardened, wild-west settings of projects past for an impersonal, fluorescent illumination on the malpractices of modern power structures. But when the people this film represents are no more vulnerable to the wrath of the government and the media than the man who made it, and when the movie blatantly acts against its own ethics, who does this story actually serve?