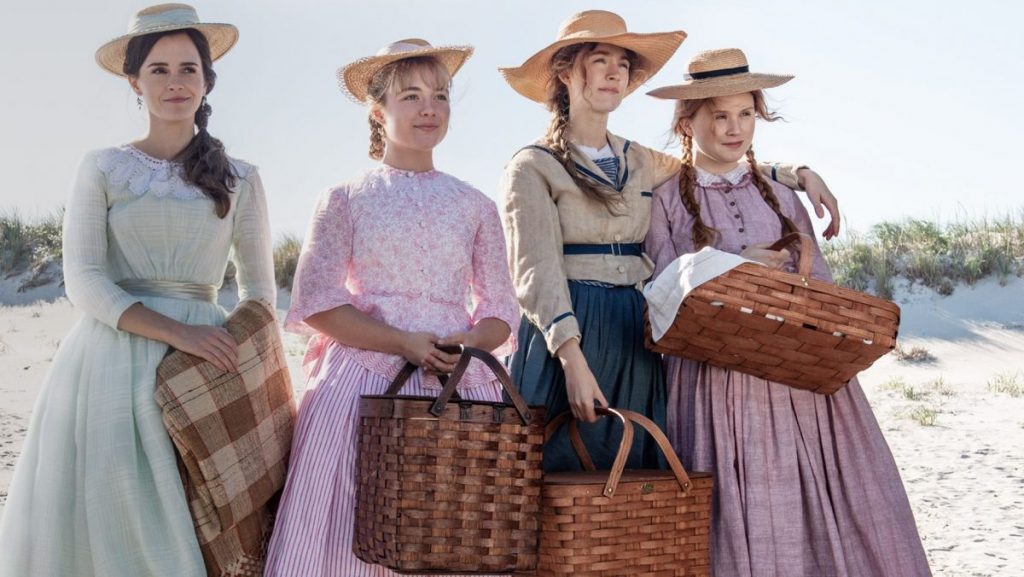 After over a dozen adaptations on big and small screens, does the world really need Greta Gerwig’s take on Little Women? For reviewer Chris Cassingham, the answer is a resounding yes.

Louisa May Alcott’s book Little Women is about four girls growing up during and after the Civil war; Greta Gerwig’s movie Little Women is, in many ways, about that book. Good adaptations mold and reshape their inspirations to say something prescient about the times in which we live, but the greatest ones go beyond that, paying respect to their origins while reevaluating the way they need to be presented to today’s audiences.

Alcott’s Little Women has been adapted for film and television over a dozen times. What is there left to mine from the 150 year-old pages borne of her real life? Gerwig, directing her second feature film, manages to distill overlooked modern concerns about artistic integrity and a woman’s economic imperatives from Alcott’s beloved novel, creating a film that feels alive with these ideals, as if they were being introduced for the very first time.

To do this, Gerwig makes significant changes to Little Women’s narrative structure. Past and present intermingle in ways that may confuse a passive viewer, but will reward an active one. The film opens on Jo March (Saiorse Ronan) in New York City, already making her own way as a writer, living in a boarding house, and already friends with Freidrich Bhaer (Louis Garrel).

The destinies of Jo and her sisters Meg (Emma Watson), Beth (Eliza Scanlen), and Amy (Florence Pugh), are divergent branches of the same existence; they hint at the wild storm of potential and conflict that colored Alcott’s own life. It is 1868 and each sister has a life of their own: Meg, a mother of two, is trying her best to live frugally, though not invincible to her desire to live more elegantly; Beth, frail and quiet, is still at home with Marmee (Laura Dern), passing the time by playing the piano; and Amy, living in Paris as her Aunt March’s (Meryl Streep) companion, is practicing painting but harboring doubts about her talent.

Gerwig hearkens to Jo March’s past organically; often in throwaway moments, such as when Jo burns the hem of her dress by the fireplace at the boarding house in New York as she furiously scribbles away in a journal. Other times they are deliberate, a reflection of Alcott’s dedication to telling a story that is distinctively hers. The scorched dress by the fireplace doesn’t trigger a flashback, but it certainly inspires one; that flashback occurs a few minutes later during a boisterous party that fluidly transitions to the warm tones and hopeful sentiments of seven years earlier at the March house, as the sisters prepare for another party. There, Jo meets Laurie (Timothee Chalamet), a long-limbed, energetic free spirit, unencumbered by the weight of his social position. He asks Jo to dance, but she says she can’t on account of her accidentally burning the hem of her dress earlier by another fireplace.

These moments and others are fuel both for the story that is unfolding in front of us, and for one yet to happen. The memories play a wonderful trick on the audience, and betray the powerful pull of home that is working on Jo from the very beginning. When she receives a letter from Marmee saying Beth is sick again, her mind drifts off to Christmas morning years ago — their trip to the Hummel family to give them food and supplies, the letter from their father, and their play, “Poison,” rehearsed to perfection under Jo’s dictatorial control. Once Jo returns home to help take care of Beth, the memories come swiftly and directly; memories of the beach, of Meg’s wedding, of Jo’s burnt book.

Amy March’s life in Paris, happening parallel to Jo’s life in New York City, is another critical anchor to Gerwig’s thesis about independence and economic sacrifices. Dissatisfied with her talent as a painter, Amy decides to give up the craft and marry Fred Vaughn — though Laurie, idly wasting his time as a Parisian socialite, harbors feelings for her, too. When he visits Amy’s studio to apologize for his drunken outburst at a party, they have a prescient discussion about the kinds of sacrifices women have to make to secure economic stability.

Laurie, ever the romantic, believes Amy is free to marry rich, just as long as she loves the man. Amy, on the other hand, is attuned to the restrictions already working against her, even before she has given up on her passion. She knows she is not afforded the same freedoms as Laurie, who she has noticed is wasting away his time and money in Paris, while she has to worry about securing a husband in case she cannot make her own money as a painter.

Gerwig’s talent in cohesively threading flashbacks through the present is equal to her generosity for her characters. More often than not, once Jo has returned home, memories weave their way in and out of the lives of all the sisters, not just Jo’s. The most powerful and emotionally devastating of these belong to Beth, overlooked in previous adaptations but now a central figure representing, as Amy says before her return home, “the best of us.” It’s a testament to Gerwig’s unwavering commitment to the source materials — that is, Little Women the book, and historical accounts of Alcott’s own life — that she can outsource these memories to all members of the March family while maintaining the integrity of the book’s message.

In the wake of Beth’s death and Amy’s return and marriage to Laurie, Jo’s story is the only one left to be tied up. In her despair, fueled by lost loves of all kinds, she doggedly writes down her life. All through the night she churns out page after page of her years of longing, desire, and heartbreak as a young woman. It’s the opening chapters to a book called Little Women. Gerwig gracefully weaves Jo’s writing with her spontaneous — verging on contrived — coupling with Friedrich, who has shown up at the March house out of the blue to see her, as well as her final meeting with her New York editor, Mr. Dashwood (Tracy Letts). He’s meant to arrange the publishing terms for the book, having been made aware of its potential by his daughters, who read the chapters Jo sent and demanded to know the rest of the story.

Dashwood offers Jo either an upfront payment in exchange for the book’s copyright, or five percent of the royalties, though she ends up with 6.6 percent of the royalties and the copyright to her book in exchange for writing in a marriage for her heroine. As this arrangement unfolds, Gerwig intercuts scenes of a rain-soaked Jo March as she descends to the train station from which Friedrich is about to depart. Their perfectly timed reunion ends in frantic words and a passionate kiss. It is rapturous, cathartic, and a bit silly, but completely romantic, and bolstered by a playful and exquisite Alexandre Desplat score; it’s exactly what Gerwig and Alcott wanted us to experience.

These delicate, interwoven strings of narrative blur the lines between reality and fantasy, between Jo March and Louisa May Alcott, but create one of the strongest and most potent flashes of agency in any movie this year. The ending is so wonderful because it balances along the edge of the compromises Alcott made for Jo March in her Little Women, as well as the sacrifices Jo March made for the heroine in her Little Women. It imagines a world in which a woman living in the aftermath of the Civil War can fully and uninhibitedly tell her life story, while toeing the line of the economic and cultural expectations that held that fantasy back in real life. It’s meta in the best way; Alcott never married, but she was able to live the life she wanted on the sale of Little Women alone, by securing an unprecedented amount of economic control over her book. This is the part of Little Women, the movie, that is crafted to reflect Alcott’s story, and Alcott’s story alone.

That Jo’s love for Friedrich, however improbable it may seem, feels so strong, so powerful, is a testament to both Alcott and Gerwig. It’s Alcott’s writing that brought them together, and it is Gerwig who imagines a world in which these agonizingly authentic fictional characters are not bound by the realities we assumed for them. Did Jo March actually marry Friedrich? Alcott may have written it that way, but it also doesn’t matter, because this Little Women is just as much about Alcott’s real life as it is about Jo’s fictional one. That is where the power lies in this, the most radical and, ultimately, faithful adaptation of an American classic.