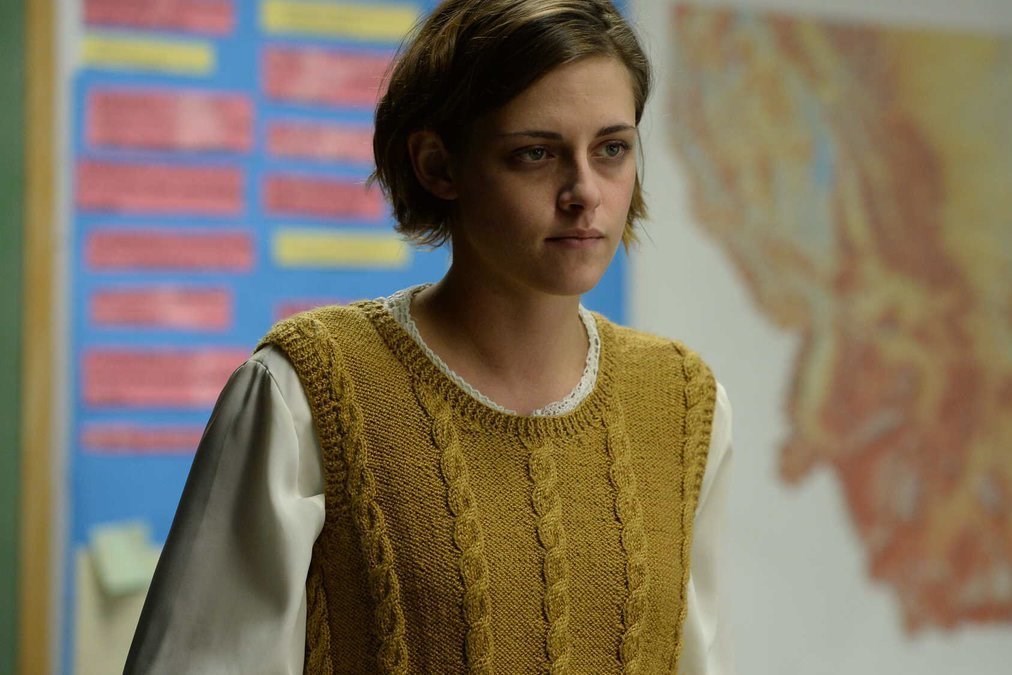 Certain Women, director Kelly Reichardt’s modern pioneer-woman film not only explores the temporary trials and tribulations of its three contemporary women, conjured from the short stories of Maile Meloy, it also showcases how the gorgeous, wide-open, the Montana landscape ties into each central character’s own sense of loneliness and longing. Divided into three, interlocking parts, the film explores not only the crisis of femininity through couples and small-scale life.

The film begins with a gorgeous shot of a cargo train rolling along a sleepy countryside; the film restrains itself with little to no music to fill the atmosphere. The horns of the train, the clomping of a horse, or even small town commotion provide the film’s soundtrack. We begin with Laura (Laura Dern) who is ending a moment with a lover who says little to nothing before departing. Laura then goes to work to meet with a rowdy older client (Jared Harris) who has been, in his mind, wrongfully treated by his former employers and wants justice. Laura doesn’t think he has a case, and has set up a meeting with another lawyer, a male one, to show that his case has little merit. The other lawyer agrees with Laura and that because he took a settlement upfront, his chances of a successful suit are little to none. Before leaving, Laura’s client has a fight with his wife and Laura begrudgingly gives him a ride home before kicking him out after saying he’s going to shoot his former employers. Later that night, Laura is called into a hostage situation with her now former client who needs somebody to read his records from work. This is perhaps the most comedic part of the film while also being the most disturbing, as Reichardt’s down to earth approach to storytelling escalates such dark but amusing parts. Laura seems to take her constant torment with stride and contempt for her now former client who is in his own battle. Laura, despite the ridiculousness of what she’s been put through, still stands by her man.

The center story of the film features transplant Gina (Michelle Williams) who is at odds with her teenage daughter (Sara Rodier) while getting little support from her husband, Ryan, (James Le Gros) who you may remember as the bearded man Laura was sleeping with from the first story. It’s never commented on, but only subtly hinted at when Gina is on the outs from her husband and daughter’s inside joke. Gina’s own personal struggle is mirrored when she is negotiating a deal on some unused sandstone from a dotting neighbor, Albert (Rene Auberjonois), who seems unsure of what he wants from minute to minute. While Ryan is cautious to facilitate the fragile man, Gina is a bit more persistent and not taken seriously by Albert. Later, after a deal is finally struck between the two parties, Gina is less at peace with her newly minted deal. Doubt arrives when she notices Albert’s lack of response to her excited waves when she and Ryan come back to pick up the stones, as Albert just stares blankly at her and rescinds back into his home. Perhaps Gina is still being slighted or he simply just doesn’t even remember her, it’s a query that adds to Gina’s uncertain dominance as a woman and how maybe remnants of the past are still present, even in a form of paranoia.

The final story follows Jamie (Lily Gladstone), a young rancher who begins taking a night course at a local community college to fight winter boredom. She doesn’t actually sign up for the class, as curiosity takes over as she’s driving around one night and sees cars parked outside of the school. It’s there that she meets Beth (Kristen Stewart), a young lawyer who erroneously signed up to teach a class four hours away in hopes of supplementing her income. Jamie is more than willing to help Beth find something to eat after class and the two begin hitting it off, and after class meals become a routine. To compound the romantic tension, one week Jamie brings one of her horses to class, and she and Beth ride the horse to the diner. Beth doesn’t show up the following week and a new teacher has taken over teaching, much to Jamie’s shock. In a moment of spontaneity, she drives the four-hour drive to her town of Livingston to hopefully run into her, and actually does with Laura from earlier who works in another law firm. Having slept in her truck, she camps outside of what she presumes is Beth’s place of work and does finally find her.

Beth would have never seen her again if she didn’t come. Beth’s minor reaction, or lack of reaction, causes Jamie to immediately get into her truck and get out of town. Exhausted from the all-night driving and searching, she falls asleep and drives off the road and into an empty field, thus ending her journey.

Reichardt decided to include the rancher’s storyline but to alter the gender of the character from male to female. In a film that’s primarily about women, it’s a curious switch and answers why this peculiar character might be so naïve, as the teacher is clearly not super interested in her. We get a sense that this is all foreign territory for her. We are left to speculate why this woman is so taken by Stewart’s character who offers not much more than stilted teaching, subdued pleasantries, and well perhaps most importantly; a listening ear. Perhaps the prolonged lack of human contact on a ranch could lead anyone to drive 8 hours for a flicker of connection, however misguided.

As a minimalist director and thus a storyteller, Reichardt is more about the drive than the destination, as payoffs are more or less found within characteristics realized. Certain Women is filled with emotionally deep portrayals of them, tremendously acted, and complimented by the lush scenery of Montana vistas. A romanticized escape from human connection haunts the terrain, but the buried longing throughout Certain Women encapsulates the true beauty within.

Certain Women comes to the Criterion collection for the first time on DVD and Blu-Ray in a brand new director-approved 2K digital transfer and with a 5.1 surround DTS-HD Master Audio soundtrack. The supplements include an interview with Reichardt, friend, and producer Todd Haynes, and writer Maile Meloy whose short stories were developed to the film. It’s Reichardt’s first film to make it to the Criterion (I’d wager it won’t be her last) and Certain Women shows off the director’s prowess for creating a beautiful landscape for her nuanced characters to inhabit. While the film while certainly not a classic yet, has momentary cache with its cast of Dern, Williams, and Stewart who provide commendable jobs. Also, relative newcomer, Lily Gladstone is the wonderful unearthing for the film and certainly carries her own. Also included is the trailer for the film and an essay by critic Ella Taylor who explores the film’s interlocking narrative and subdued social context within. When contemporary or modern films make it to the collection, it’s always interesting to think how the film will fare after aging, and Certain Women seems to be the kind that will ruminate strongly with those with a bit of soul and life experience that compliment these small and intimate stories.

Available on Blu-Ray, DVD, and Filmstruck