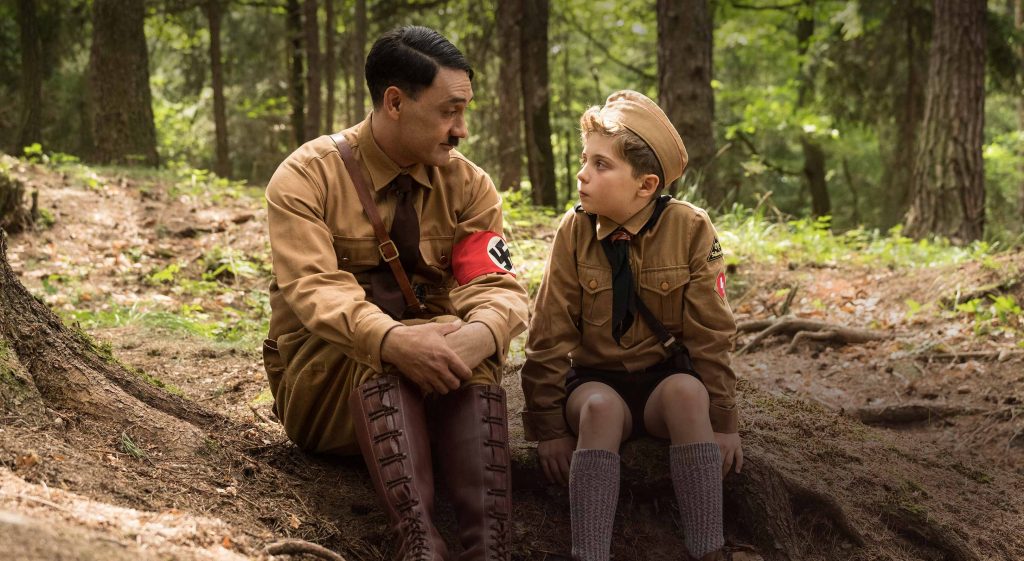 Jojo Rabbit is an “anti-hate satire” featuring a bumbling Nazi pre-teen and a comical imaginary Adolf Hitler. But is there an effective message underneath these startling satirical elements?

Taika Waititi’s most beloved films combine an unencumbered sense of fun with a deep compassion for their characters. The New Zealand director’s rise to mainstream recognition has been swift thanks to cult classics like Hunt for the Wilderpeople, and What we do in the Shadows; as well as box-office juggernauts like Thor: Ragnarok, all of which share an irreverent tone in quirky, off-kilter settings.­ Waititi’s latest, an “anti-hate satire” set in Germany during the Second World War called Jojo Rabbit, not only pushes his creative efforts in new directions, but also thrusts him firmly into the awards spotlight.

Jojo Rabbit tells the story of young Jojo (Roman Griffin Davis), a 10-year old boy whose greatest wish is to be the most fearsome and loyal Nazi in all of Germany. The only thing holding him back is the nagging feeling that he isn’t up to the challenge. Thanks to the help of his imaginary friend, a dopey and childlike version of Adolf Hitler (Waititi) who gives Jojo pep talks whenever he needs them, he thinks he has the tools to succeed. While at Hitler Youth camp, Jojo is challenged, and fails, to kill a rabbit to prove his commitment to Nazism, thus giving life to his nickname, Jojo Rabbit.

Sidelined from all the interesting Nazi activities thanks to a miscalculated grenade toss, Jojo spends most of his time indoors lamenting the missed opportunities to be a good Nazi. Wandering around his empty house, he discovers a young Jewish girl, Elsa, played with charming grace and dignity by the fabulous Thomasin McKenzie. Elsa is being hidden in his house by his mother, Rosie, who is played with moving compassion and depth by Scarlett Johansson. It’s Jojo’s worst nightmare. Now he has to navigate the complicated moral and ethical dilemma of his allegiance to Hitler, his twisted fascination with Elsa, and his desire for companionship in a world that has seemingly turned away from him.

If you take away the film’s gimmicky premise, this conundrum isn’t unfamiliar. The story of the lonely and misguided boy and the mysterious girl who could turn him towards a new, righteous path is well-trodden territory that Jojo Rabbit, unfortunately, makes no attempt to avoid. Even Jojo’s internal dialogue, facilitated by the imaginary Hitler, doesn’t achieve the originality it’s going for. Their lively debates deliver humor and irreverence, thanks to the skill of the actors performing them, but they can’t invent moral ingenuity out of thin air.

Inevitably, Jojo’s encounters with Elsa, kept secret from his mother, make him realize the absurdity of his beliefs — something the imaginary Hitler cannot seem to understand, much to his goofy chagrin. The absurdity of the film’s premise is meant to be the platform on which an original story of empathy, righteousness, and understanding can thrive. Instead, it merely disguises what we already know.

Jojo’s blind hatred of Jews, or at least his wildly misguided understanding of them, allows Elsa to control their conversations and steer him towards enlightenment without him realizing. This isn’t sinister manipulation, though — instead, she jokingly confirms his beliefs, even as she counters them in the same instant. From their first encounter, the audience knows what she is doing.

Jojo’s mother, Rosie, is the film’s guiding light. A member of the anti-Hitler rebellion, she leads her life with verve and compassion, as evidenced by her selfless devotion to Elsa’s safety. However, her passive efforts at trying to change Jojo are left unexplained.

In the end, Jojo Rabbit­ is a strange, bifurcated take on the odd couple genre, using Jojo’s relationships with both Elsa and the imaginary Hitler as tools that unfortunately only scratch the surface of the issues it is trying to raise.  If this film has an overarching message, it is that the youth are our only real hope against the world’s inflexible adults. Apart from a few good adults, such as Rosie and a disillusioned, but troublingly sympathetic, Nazi officer (Sam Rockwell) with whom Jojo is close, only children have the ability to change their understanding of people different to themselves.

However, the film also recognizes that children are easily susceptible to manipulation. Just as Jojo was hoodwinked by Elsa into helping her out, the other young children in the film are just as quickly indoctrinated into the Nazi ideology — as Jojo once was himself. Besides her vague references to kindness and freedom, Rosie’s passive role feels like a wasted opportunity, until a sudden shift in the last half hour of the film brings Jojo some much-needed perspective.

Jojo Rabbit can’t avoid the tropes of its genre. Too often in films like this, disadvantaged characters are tasked with changing the minds of captors or enemies who can’t see the light on their own. For this reason and others best left unspoiled, Jojo Rabbit left me wondering what I was supposed to learn. Sure, its saccharine message speaks on a surface level to the sense of social unrest many people feel all over the world; but that is exactly why it should have aimed higher and deeper.

Its radical premise and genuine laughs can’t overcome the fact that the film’s most empowering message is that we should be kinder to one another. I wanted to be as surprised by Jojo Rabbit’s­ themes as I was when I laughed at a funny Adolf Hitler. Unfortunately, its moral aims are about as accurate as Jojo’s throwing arm.