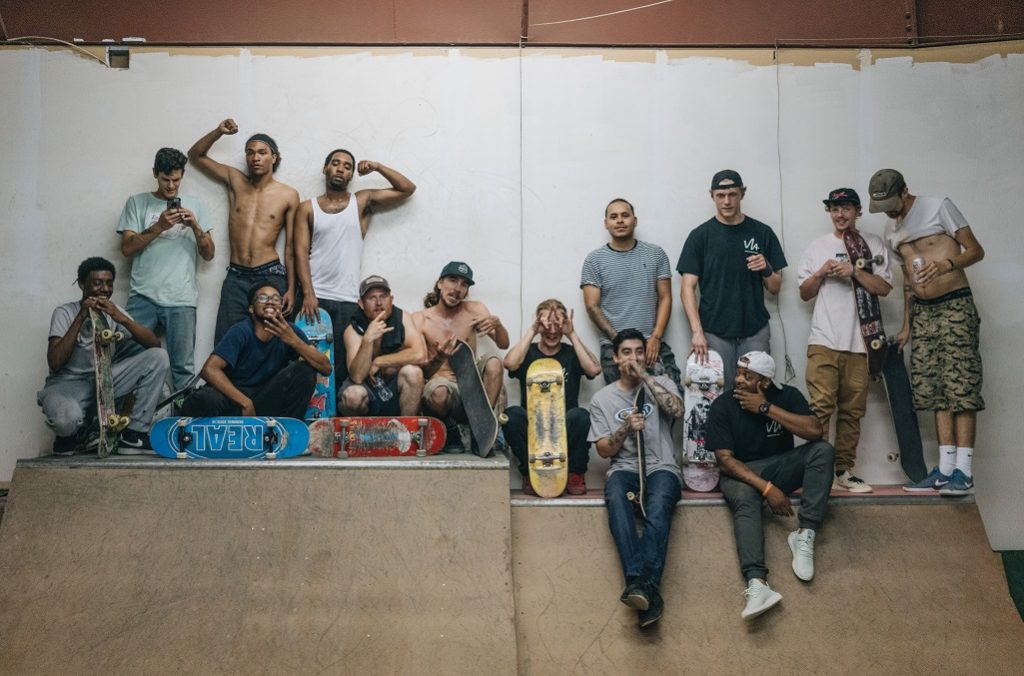 *This article originally appeared in RVA Mag #37, on the streets now at all your favorite spots.

Hip hop and skateboarding: two subcultures with roots that go back well over 40 years. Over the decades, each has had a long struggle for acceptance before eventually becoming mainstream cultural staples. In the past decade, the two have become more closely intertwined than ever. Stars like Pharrell Williams and Lil Wayne have embraced their skating roots, and rappers today wear Vans as much as they wear Adidas and Nikes (word to Dom Kennedy). Here in Richmond, there are days when downtown Broad Street looks like a skate park.

I spoke to Shawn Gray at the Analog Suspects record release show, where the group raffled off a limited-edition signature skateboard deck produced for them by Washington Avenue Skateboarding. Gray is the man behind the Richmond-based Washington Ave, and has his own history as a rapper as well. We spoke about RVA hip hop and skateboarding as he and his team prepared to hit the road for Washington Avenue’s first skate tour.

How did you first get into skating?

My mom actually skated back in the eighties; I saw photos of her while in New York. And then, I’m not even gonna lie, man — PlayStation 1, Tony Hawk’s Pro Skater. If I didn’t say that, I’d be a liar. Before it came out, I was into X games stuff — into watching it. But when the actual video game came out, and you can pick a black dude, and it was rap music… I’m just like, “Oh okay. Let’s do it.”

How long were you a skater?

I started out in the driveway. After a few falls, that didn’t last too long [laughs]. It wasn’t where I wanted it to go, but the love was always there. Since then, I’ve been on and off the board recently, but nothing too serious; to where I can give anybody else on a board judgement. That’s what I don’t do — that’s when you become a poser.

Then you became a rapper, before eventually starting a skate team. How are those things similar?

It’s similar in the way you deal with people. As a rapper, you can’t be anyone but yourself, or you’re outta here. The same with skating. Both ventures heavily rely on relationships, so it keeps me in line, knowing that I can’t do this alone.  For example, me and OG Illa went through a lot. Back when I was a rapper, I wasn’t focused on being as much of a good person, so I let ego get in the way of a few things. And I had the power to stop an issue or two, and didn’t stop it. I didn’t want to stop it. Around 2018, I don’t know when I saw him, or how I saw him — probably Instagram — but he came by my job. I apologized to him for being like that back then. Once I did that, not only did I feel better, that’s when we decided to see if we can get something done together. You have to grow.

Have your connections from your days as a rapper also helped with skating connections today?

Yes, the rappers you see coming through are from my rap career, like Versace Chachi and Noah-O. Back then, when I was like “Oh, I could rap with y’all,” [Illa] gave me the Jay-Z and Kanye stiff arm.  I’m glad he did because I wasn’t ready. I was ready lyrically, but I wasn’t ready to be around that level of dedication and hard work they were doing over there. I was just raw talent.

Recently I’ve seen plenty of kids — black kids at that — on boards up and down Broad Street. How does it make you feel to see the diversity?

Let me tell you something, man — that is one of the happiest things that I’ve been seeing, as far as Richmond goes. Seeing Broad Street being shredded up and down. And it’s cool because that started right around the construction time; a lot of those intersections were blocked off, so a lot of them had access to the middle section over there. Now it’s open, but hey, I guess they claimed it. (laughs)

You’re about to head out on the first Washington Avenue skate tour. How many skaters are on the tour?

Ten skaters. The tour is from July 25th to August 5th. We will be leaving out of Richmond that Thursday night, headed to Tampa, then Atlanta, Charlotte, and back to Richmond.

Is there a hip hop tie-in?

The skate tour kind of evolved; it was going to be a hip hop/skate mashup type thing. But it didn’t work out that way, because it’s the first thing that we’re doing. I didn’t want to make it look like too much of what it wasn’t. It’s a skate tour, you know what I’m saying? Now, hip hop is definitely part of it; that will always be there. But I didn’t want anybody else to feel like I wasn’t focusing on them as much as I should. I really want to do a showcase, a hip hop/skate-type thing [on the Richmond stop]. We do skate night every Wednesday at Monkey Brainz RVA over there [on Jeff Davis]. So I want to do a juiced up skate night that Wednesday — might have a skate showcase; or a pop-up shop type thing.