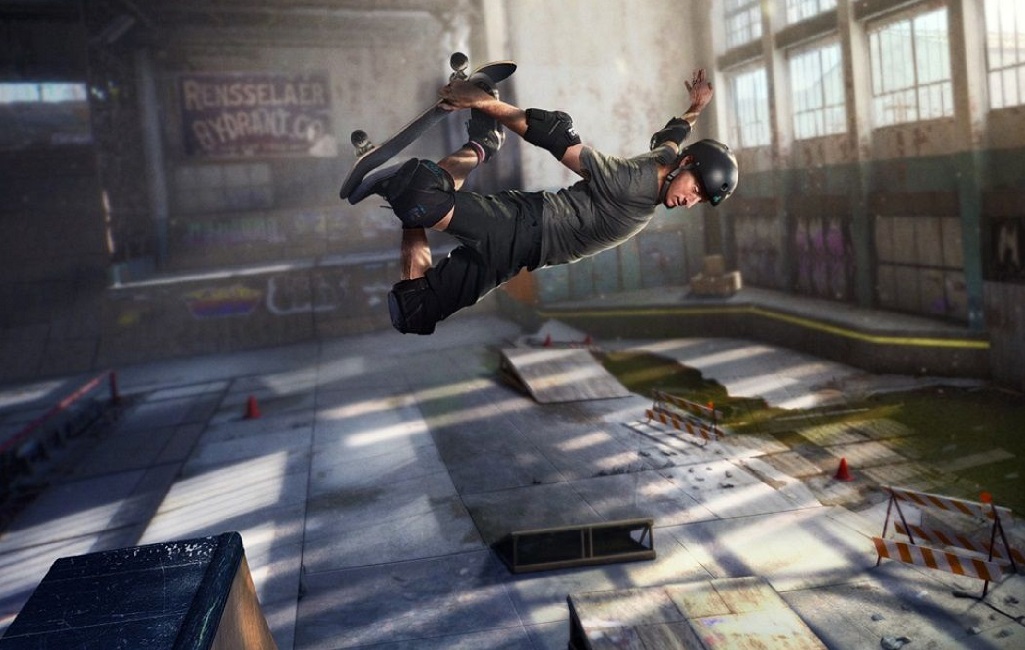 In this edition of RVA Game Cave, columnist Jonah Schuhart explores a new reissue of the earliest installments of a now-classic franchise. Tony Hawk fans, get stoked.

There was a time, back in the 90’s and 2000’s, when skateboarding video games were almost more popular than skating itself. The mainstream popularity of figures like Tony Hawk had leached into everything from TV to movies, and games were certainly not the exception. Debuting in 1999, the original Tony Hawk’s Pro Skater took the world by storm. Its mixture of arcade-y gameplay and a classic soundtrack borrowed from a variety of popular and underground artists attracted players from both inside and outside the skateboarding community. The gameplay continually improved as the series went on (until it peaked with Project 8, that is), but many people continue to hold a special nostalgia for the first two entries. That’s why when the opportunity for a revival on the PlayStation 4 presented itself, Vicarious Visions and Activision chose to remake THPS 1 and THPS 2.

As straight-up remakes go, few reach the same level of quality as Tony Hawk’s Pro Skater 1+2. Each and every level from the original games have been beautifully recreated with modern graphics. These environments have never been so detailed and alive, and playing through them in this new graphical style almost feels like a new stage.

What does feel different is the gameplay. Though it is based on the mechanics established by the original, THPS 1+2 has retained some of the gameplay nuances that weren’t added until later entries into the series. Reverts, which allow the player to continue their trick combos after landing on a halfpipe, weren’t added until THPS 3. However, THPS 1+2 elects to include them. As a result, the game is much more open in what the player is able to do. Combo-ing from flatland tricks onto rails, off of quarter pipes, and against walls feels smooth and satisfying, as each type of trick blends seamlessly into the other. Once a player gets a feel for how tricks move and operate, they should be dancing across the level in a flurry of flips, spins, and grinds to get the highest scores possible.

Unfortunately, it lacks some of the mechanical features that make other, later Tony Hawk games superior in certain regards. There’s no slow-motion abilities or custom-trick mode, like the ones present in Tony Hawk Underground 2 and Tony Hawk Project 8, and so, in terms of gameplay, it is still not the most advanced. However, it is plenty expressive and enjoyable, and is likely the most accessible way to enjoy some solid Tony Hawk gameplay for anyone with a PS4.

As enjoyable as the gameplay is, however, it fails to mesh well with the rest of the game in some portions. This is specifically in regards to the missions and how they can be completed. Most of the missions, which require some environmental task (like collecting the SKATE letters) work well, but the challenges which require the player to reach a score threshold fail to hold up. Once the player reaches a certain level of experience, even the higher-end score challenges can be done in one or two tries. This doesn’t take up a lot of time, even during the limited two-minute runs the game affords the player during the career mode. A further hindrance is the fact that the player can’t reset the challenges to do them again. Instead, they need to create an entire new account just to do the single-player challenges a second time. In the end, the game’s career mode lacks any sustainable challenge for more experienced players, and can’t even provide further enjoyment from continual replays.

This problem is somewhat accounted for in the different extra trials available to each individual skater, including the player’s own custom character. Players can unlock new outfits and gear for these skaters by completing these challenges and earning money for the shop. It’s a great way to increase the length of a fairly short game. Combined with the functioning online modes, this makes it a good bit more substantial than the originals, and very-much worth the $40 price tag.

Complementing all of this high-flying, death-defying stunting is the highly-praised and nostalgia-ridden soundtrack. Most of the songs from the classic releases are present, including the iconic “Superman” by Goldfinger. Even with the new coat of paint and slightly altered roster (some newer skaters were added to the classic lineup of definitive 90’s and 2000’s era pros), these songs pair nicely with the game’s aesthetic and pacing.

There are some new songs as well, and though they are not bad songs in and of themselves, it is a bit odd to hear a British grime rapper like Skepta come on right after a Sublime song. Still, the music is just an extra-nice layer of icing on a cake of solid gameplay and level design. In the end, this is the most enjoyable and complete official Tony Hawk game to come out since Project 8. That’s almost a decade and a half without a single decent Tony Hawk title to speak of. There’s only one thing that might trump it.

Just because the quality of Tony Hawk games died off in the mid-2000s doesn’t mean that the community did the same. Tucked away in their own small corner of the internet, survivors of the Tony Hawk stock market crash continued to live on in a modded version of Tony Hawk Underground 2 called THUG Pro. Much like THPS 1+2, it had a variety of maps from across the series, let players customize their character, and even had online servers to play with friends. It’s still arguably the definitive way to enjoy some good-old fashioned Tony Hawk gameplay, thanks to THUG2’s more diverse set of tricks and the wider variety of maps. Unfortunately, it also lacks the graphical fidelity afforded by this remake.

Whether someone sticks to THUG Pro or moves on to THPS 1+2 is irrelevant. Both are incredible ways to enjoy the series. But even if someone is content with THUG Pro’s experience, it’s still in their best interest to invest in this remake, if possible. The consumer’s dollar counts, and every purchase is another vote for more quality Tony Hawk games to hit the market.

Even if that never happens, though, THPS 1+2 is still an amazing game. It’s a refreshing nostalgia trip with a few twists for old fans, and a novel way to get familiarized with the series for newcomers.