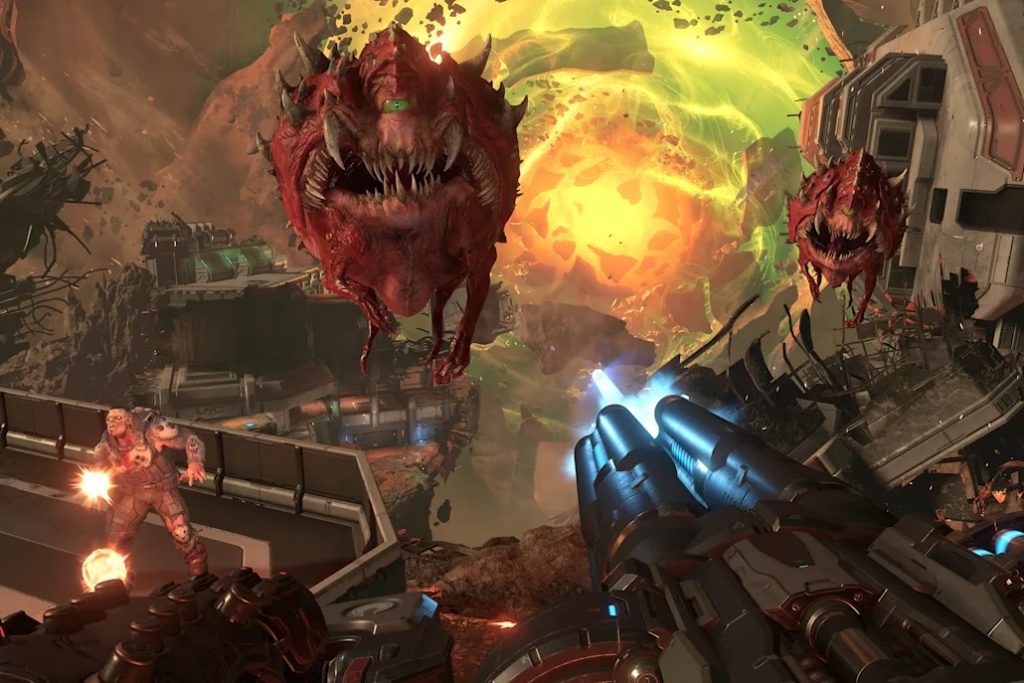 DOOM Eternal is an amazingly indulgent experience. It’s a five-star, all-you can eat buffet table that never runs out. Almost everything on the menu is delicious and there is always more. It is infinite, it is “Eternal…” because that’s what DOOM Eternal is all about: giving the player more.

And by “more” I mean “more of what they already gave us in the last game, DOOM (2016).” DOOM (2016) was a triumph for old-school first-person shooters. It was all the best parts of the original Doom series mixed with other classics like Quake and the early Halo games to make a bombastic, engaging single player experience that laughed in the face of modern shooter conventions.

That mentality carried DOOM (2016) to victory. It became one of the most celebrated games of that year due to its refreshingly classic, ultra-violent gameplay; amazing graphics and head-bangingly djenty soundtrack (created entirely by my one true love, Mick Gordon).

DOOM Eternal picks up where 2016 left off, and gives us more of that sweet, rip-tearing action (scored with even more of Mick Gordon’s lovely, dulcet tones). Of course, you’re still the Doomguy, the big mean green machine destined to turn demonic hordes into bullet-ridden mounds of flesh pudding. You’re also still equipped with an impossibly extensive arsenal of guns, movement options, and special abilities, with which you are to complete your gruesome task.

Seriously, the Doomguy is completely stacked with over-powered bullshit in this game. He’s got shotguns that shoot grenades, a double jump, two mid-air dashes, a one-hit kill chainsaw, a 12-barreled minigun, a shoulder-mounted flamethrower, an extendable arm-blade, and much, much more. I barely scratched the surface of his utter litany of gun options (he gets a lightsaber, for God’s sake). Even if I did list them all, that would still be less than half of it, because almost every weapon and ability has like, eight upgrades. I mean, come on people, your double barreled shotgun starts with a grappling hook on it, and by the end of the game that grappling hook sets stuff on fire. It’s so over-the-top and bonkers, in the absolute best way.

Almost all of it is useful too. The levels and enemies are designed in such a way that no one weapon will solve all your problems for very long, and staying in one place is a death sentence. Pretty much everything in the game is designed to make you juggle all of your weapons and abilities at any given time.

This means that the basic gameplay loop from DOOM (2016) is still in effect. Run around the map raining hot lead upon demons while avoiding damage, run out of ammo, use your one-hit kill chainsaw to make an enemy drop ammo, restock your guns, rinse and repeat. The only thing that’s changed is that there’s more of it.

Things like the newly added mid-air dashes just add more mobility to the Doomguy’s already mobile frame. He already runs like a cheetah hopped up on Four Loko, but now he can basically fly. What ties additions like these together is the way the rest of the game is suited to them. DOOM (2016) had a decent amount of vertical space in its levels, and with these new aerial options, that amount of vertical space has increased in Eternal. Arenas now often come with two or three different vertical layers to them, and Doomguy can transition between them seamlessly with his aerial movement options. It expands on the formula initially established in DOOM (2016) in a very comfortable and natural way.

You could argue that there is a downside to this. DOOM Eternal definitely begins with the assumption that the player has some familiarity with the core systems. Things are harder this time around. Levels are more intricate, the gameplay is more complex, and the demonic enemies are more challenging and varied. It might be tough for a brand new player to feel comfortable in DOOM’s hectic gameplay. However, since Eternal is a direct sequel, it is understandable why the game wastes no time in providing fans with a fresh, engaging experience from minute one.

Another mark against Eternal is its less-than-graceful approach to boss design. Two of the major bosses basically become regular enemies, as they appear over and over again in normal battles. One of these bosses, the Marauder, is designed in such a way that he completely distracts from the core gameplay loop. Instead of juggling all of your enemies and resources simultaneously, the Marauder demands all of your attention, forcing the player to run away from him while clearing out all the other enemies before finally focusing on the “boss.” In general, the other boss battles get better as the game goes on, but they don’t really start to shine until the final two. And by then the game is already on its last two levels. Too little, too late.

Perhaps less of a main attraction, but certainly worthy of merit is Eternal’s online mode. It moves forward from (2016)’s standard pvp deathmatch-style game modes and creates a unique, asynchronous experience. By asynchronous, I mean that not every player plays as the same character. In Eternal’s online, only one player controls the Doomguy, while two others control a demon of their choice. You can play as fan-favorite enemies such as the Arch-vile, the Mancubus, and even the brand new Marauder (who is much more enjoyable to play than he is to fight).

The player controlling Doomguy is tasked to eliminate the two demon players as fast as possible. If he can’t kill them both quickly enough, then any dead demon player can respawn, effectively putting the Doomguy at square one. In contrast, demon players only need to kill one Doomguy, and they have the advantage of being able to summon lesser demons to harass him. It’s a 2v1 scenario, and can feel wildly unbalanced based on how good the demon players get at strategizing. This means that Eternal’s online probably won’t make it to the annals of esports fame, but it is certainly somewhat enjoyable. All in all, the online can be good for a fun time, but it is decidedly overshadowed by the single player experience.

In terms of story, DOOM Eternal does a great favor to fans by finally clearing up the vague plot it established in DOOM (2016). In (2016), the Doomguy was no longer just a regular space marine in a bad situation (as he was presented in early Doom games), he was renamed as the DOOM SLAYER: a nigh invincible force of nature hellbent on pulling a one-man genocide on all of demon-kind. Heck, nobody was even sure if the original marine and the SLAYER were the same person. We know that in (2016), he had some vague connection to an inter-dimensional order of knights and a great betrayal that led to their downfall, but nothing was quite fleshed out.

Well DOOM Eternal stops dangling the carrot in front of us and gives us some answers. The SLAYER and the Marine are one and the same. After Doom 64, Doomguy locked himself up in hell to wage his eternal war, and somehow traversed dimensions to wind up on the doorstep of the alien Argent D’Nur people. Through determination and pure rage, Doomguy was able to make his way from mere gladiator in their society to venerated member of the Night Sentinels (the aforementioned order of knights), and eventual demi-god of kingly renown. The crux of the plot in Eternal comes as the SLAYER faces off with the godlike beings that ruled the Argent D’Nur people, but eventually betrayed them to the demons in order to gain further power.

This plot elevates Doomguy from a mere hollow shell through which the player can project themselves, to a true-blue legendary figure. There’s something awesome about knowing you’re this unstoppable, mystical force with centuries of history behind him. You’re not some Joe Schmoe with a shotgun, you’re the god-damned DOOM SLAYER, and any demon with a head on their shoulders better not be in the same room unless they want it removed with some 12-gauge buckshot. At the end of the day, the plot is nothing to write home about, but it makes the power fantasy much more potent, and the game more enjoyable as a result.

In summary, DOOM Eternal is an amazing successor to DOOM (2016). It adds more to all the things that made its predecessor shine in all the right places. It’s a gruesome, indulgent power fantasy of immense proportion that satisfies all the gory cravings fans of the game have always had. Its single-player campaign makes the player feel epic, and despite some lackluster bosses, tends to succeed in anything it attempts. It’s online may not be the main event, but it’s not unenjoyable, and is certainly worth a few late-night gaming sessions with the bros.