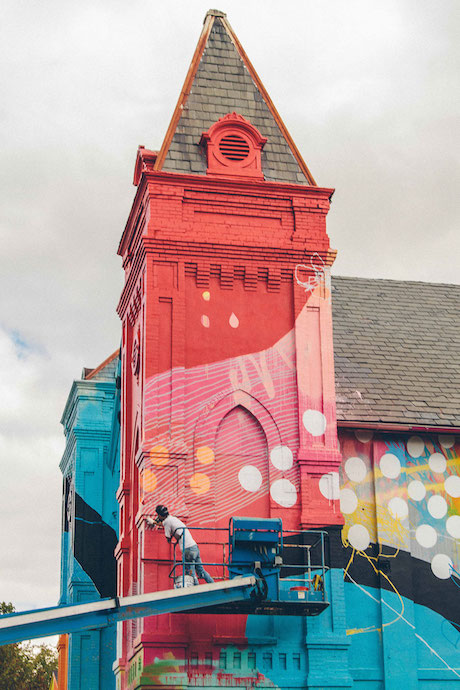 Alex Brewer aka HENSE shares roots in RVA and Atlanta, GA. Both cities played host to his youthful graffiti escapades prior to the broader acceptance of street art as a real movement.

Alex Brewer aka HENSE shares roots in RVA and Atlanta, GA. Both cities played host to his youthful graffiti escapades prior to the broader acceptance of street art as a real movement. And both have seen lasting impacts made by artist since the art form entered legitimacy.

A one-time VCU student, Brewer spent the late 90’s running around Richmond painting where he could – under bridges, along train tracks. Making tags with his street name HENSE, he recognized the hostility toward the art form. It was this hostility which lead to him dropping out of college and going back to the ATL.

“There was a few people here doing stuff (here in Richmond),” said Brewer as he painted a new mural inside the Reynolds Gallery. “but it wasn’t a booming scene – that’s why I ended up going back to Atlanta… it had more going on as far as graffiti.”

He got a gig working for a commercial publishing house in Atlanta. There, he earned a living but would go out and bomb at night.

“It wasn’t about doing commission public art, it was about rebelling and doing as much graffiti as you can,” he said.

Doing street art in the early 00’s wasn’t easy. The threat of legal recourse was very real and this forced Brewer, who worked with studio art as well, to maintain two identities – one as a reputable artist and one as street artist.

“For a while, it was hard,” said Brewer. “I didn’t feel comfortable showing under HENSE because I didn’t want to get arrested, so it was a difficult period…” Graffiti arrests were common, and mixing his professional image with his street persona would have been a prison sentence.

But after 2005, with the growth and recognition of street art, Brewer saw the chance to merge with HENSE professionally. He started thinking more about his studio work and trying to find ways to apply it outdoors. Using the same tools, pushing the scale (size) of his work to see what would happen.

This lead to some of the amazing abstraction work you can already see around town, like at the RVA Street Art Fest space in the old GRTC bus station.

Now his public art work is taken seriously and he’s comfortable and able to work under his once-outlawed alter ego.

“It’s part of me and its been with me for a long time,” said Brewer/Hence. “Whether its painting, a mural, sculpture… it’s the same guy. And curators and gallery owners are starting to realize if you have an alias or this name, it can be relevant to contemporary art.”

The exhibition, “Vacation Days,” will feature diverse work across multiple mediums, all united under the theme of “a flair toward the lights and colors of summer.”