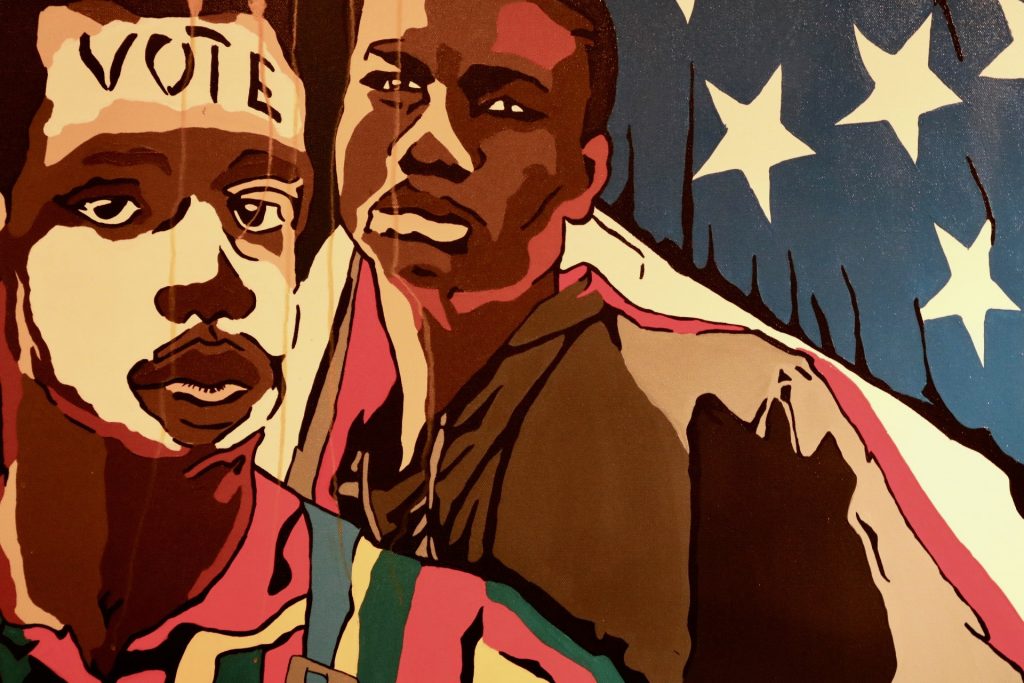 As we close out Black History Month (BHM), I must shout out my city for being true to celebrating our culture. There have been popular BHM events supported by non-blacks and held at the most sought-after venues for creatives, but more importantly, there were events that could only be pulled off by the black mavericks of Richmond – such as the “Still Nigga” art exhibit which debuted at Manchester Gallery last Friday.

There is much acknowledgment of historical figures throughout BHM, but millennials are here to recognize not just our past, but also our Black future. Black future acknowledgments are not easily digestible, in fact, the risk is too high for most Richmond media because it depicts just too much blackness. In a town that is renaming the very black Jackson Ward to the “arts district,” many are working to counteract such whitewashing by continuing to create and put themselves out for the world to judge.

In fact, there was an event here in Richmond that you might have missed because the title was a full cup of black coffee, no sugar, no cream. It was the “Still Nigga” art exhibit.

That’s a lot of title to swallow, let me explain:

On July 2, 2017, Jay-Z released the album 4:44 and the second song on the album is entitled: The Story of O.J. The video starred a character named “Jayboy” who was created to mimic the racist blackface vintage cartoons of production companies such as Disney and Warner Brothers from less than 100 years ago.

The rapper explained his motivations behind Story of O.J.’s politically-motivated lyrics in an eight-minute mini-documentary, Footnotes for The Story of O.J., “O.J. would get to a space where he’s like, ‘I’m not black, I’m O.J.’ Like Tiger Woods would get to a space and think, ‘I’m above the culture,'” said Jay-Z. “And that same person when he’s playing golf and playing great, you’re protected. When you’re not, they’re gonna put pictures of you drunk driving and, like, embarrass you. That world will eat you up and spit you out.”

Sometime back, I was sitting in Brewers Café (my local coffee shop) enjoying the 4:44 album playing on the cafe speakers. I was thinking about Jay-Z and his knowledge on how American media shows the quick rise and fall of our black heroes. This is when I looked up and spotted an excited Richmond creative transplant, Rosetta of Crenius, LLC. His eyes were filled with inspiration. He wanted to showcase Jay’s lyrical message through his own gifts of curating art.

He explained to me his confrontational title of “Still Nigga”, and how it was imperative to show our continued negative portrayal in the media. Rosetta feels that even with our gifts shining, in the eyes of this country, we will always and forever be, still a nigga.

Rosetta was not scared of the explicit title of such an art exhibit. However, Adolphus Ingram, the owner of Manchester Gallery where the exhibit opened on Feb. 28, will admit that because of the title, his first answer was no. Ingram stated that he did not want to affirm that idea that black people were “still niggas”, nor did he want to cause waves with community partners. He explained that as a new black business owner in Richmond, he is still forced to navigate optics to have access to resources.

Yet weighing optics against the “Still Nigga“ exhibit’s official statement, Ingram knew he wanted this exhibit. As a man who is not an artist himself, but an art collector, he wanted to open Manchester Gallery to create a space for local Richmond artists whose talents are not normally valued. Recognizing that Rosetta’s vision was a perfect fit, the “Still Nigga“ exhibit came to life.

Through black business owners collaborating, Southside produced an art exhibit that was black-owned, black-managed, black curated, showcased black artists from all talents, and manifested the energy that can only come when melanin engulfs such spaces.

I got my chance to engage in the exhibit this weekend and left thinking, this is so dope! But what exactly about my last Saturday night left me so hype? The “Still Nigga” exhibit itself tickled my fancy as I love a good disruptive message dismantling racist stereotypes.

Though it was the overall magic that is sparked when black creatives align that left me skipping on Saturday after the event. If you’re paying attention to how black people make moves in Richmond, then you will notice that success in Richmond is measured on how well organizers can gain community support. When I say community support, I mean supporting each other. Black on black support is what I’m saying y’all.

Community support in this sense means that our own social media is the only real exposure for our gifts will have to the digital world. Our truth is censored and often omitted completely from mainstream media and it appears “Still Nigga” was treated no differently.

This type of exhibit pushed the boundary on every narrative in our city and nation but there were zero mentions in Richmond press. There was no mention in the Richmond Times-Dispatch, Style, or Richmond Magazine of the “Still Nigga” art exhibit, but their silence sent the usual message of our two-city problem. “Richmond should remain chained and muzzled as the other half, that claim to be RVA, flourish in the spotlight” is the usual headline that registers when we (black folks) are not represented in our own neighborhoods

Even though there was no mention from those guys above, the blackness had taken off on black social media timelines around the city. Since the exhibit, the artist, and the collaboration was not highlighted for its value around Richmond I wanted to share my experience and gas up all the magic-makers that worked through the “no’s”, took the risks, and deserve to have their name in print.

If the “Still Nigga” art exhibit had gotten the press it deserved you may have seen a write up featuring the variety of art that was on display at the Manchester Gallery the last week of Black History Month. As with the best events, there was a party dedicated to the idea of FUBU, which is a 90s urban brand made For Us, By Us by now business mogul Daymond John.

Well, here’s what you missed:

On Saturday, Feb. 24 the exhibit invited the community in for a “For Us By Us” mixer that included some amazing Richmond talent. The FUBU Mixer was hosted by Style and SpiritsRVA duo Mecca Williams and Dom Graves, while the DJ, THEakasha kept the vibe going.

More local voices were added to this creative collab to include: Tan Carter who lifted our life with her spoken word, rap artist Nate G increasing our blood flow through his passion, soulful songs by Zhe Aqueen as well as community speakers: Ajay Brewer, owner of Brewers Café and Chelsea Higgs Wise, Narrative Change Officer for Truth, Racial Healing and Transformation RVA.

Need a regular dose of this exhibit?  Owner Ajay Brewer purchased a powerful piece by University of Richmond student, Nene Diallo, and it will be on display in the shop coming soon.

The exhibit is open at the gallery until Thursday, Feb. 28, but will then be traveling the east coast if you can’t make it by today. Check out the artists’ pages below for inquiries and to live through their lens.

THEakasha – @theakasha – An exhibit playlist is being released, coming soon on SoundCloud!

As Black History Month comes to a close please remember we are black 365 days a year and black artists deserve to be valued even after February. It will take both RVA and Richmond supporting these creatives to send a new message to mainstream media that black folks are more than just…Still Niggas. So don’t get caught looking like an RVA colonizer. Support your black Richmond artist.

ICA Creates Art Hotline For Those With Zoom Fatigue

Sick of endless online meetings and video chats? VCU's Institute of Contemporary Art has an artistic solution for you. Just dial... READ MORE

Radio programs, online streams, festival-exclusive foods, and art installations around town are only some of the ways this year's Richmond... READ MORE

ICA Creates Art Hotline For Those With Zoom Fatigue

Sick of endless online meetings and video chats? VCU's Institute of Contemporary Art has an artistic solution for you. Just dial... READ MORE

Radio programs, online streams, festival-exclusive foods, and art installations around town are only some of the ways this year's Richmond... READ MORE