The Richmond Mural Project 2015 has begun and we’re here to help you learn more about the artist who will be adding to RVA’s already world-class collection of murals. Below is a profile of one of the RMP 2015 artists. Keep an eye out for the rest in the coming weeks, and make sure you come out for the RMP 2015 opening party July 18th 4-8pm at Sabai – 2727 West Broad st.

See a mural you like? put it on Instagram and tag us in it – then use the hashtag #RMP2015 and the person with the most murals tagged at the end of the festival will win an original piece of art by RMP Artists.

“The aim of art is to represent not the outward appearance of things, but their inward significance,” said Aristotle.

Whether having the sole motive to aesthetically please the public or to collaborate with an organization to help a cause, James Bullough can conquer both.

American artist, James Bullough, raised in Washington D.C., migrated to Berlin, Germany to begin his career as a street artist. After the destruction of the Berlin Wall, Berlin earned it’s reputation as “the graffiti mecca of the urban art world,” referenced by art consultant and curator Emilie Trice.

For the first time, the public communicated its sense of individuality and artistic expression, turning the streets into a metaphoric symbol of freedom.

Living in the street-art mecca has rubbed Bullough the right way, leading him to incorporate in his art the widely-acknowledged theme of independence surrounding Berlin. Bullough collaborated with Dallas, Texas’ Handle with Care Project, whose mission is to raise awareness about the dangerous continuum of human trafficking, and created a series of murals representing the beauty of freedom and how it substantially impacts a person’s life.

“My task was to create a mural which would send a message of hope while bringing attention to the cause. Initially I had the idea to paint a set of hands releasing birds as a metaphor of freedom and hope,” said Bullough in an interview with Sanja Lazic of Switzerland’s Widewalls Magazine.

“While researching local birds to the Dallas region I came across a particularly beautiful bird called a Vermillion Flycatcher which seemed to have just the look I was searching for. Upon further research, however, I discovered one single fact about these birds which would change the project and its meaning into something much larger than expected…”.

Due to its ability to inhabit a wide range of terrain, the Vermillion Flycatcher is not an endangered species, but does experience similar health conditions as mammals due to its melanocyte. When in captivity, Vermilion Flycatchers’ rich colors begin to dull, and eventually turn to grey, as they are restricted the proper environment they need to strive.

“I decided to paint one main wall as originally planned with a set of hands releasing three birds,” Bullough told Widewalls MAgazine. “Each bird would become more colorful the further it flew away from the hands. From there we managed to acquire more walls around the city in different neighborhoods and painted bright red Flycatchers (symbolizing their freedom) wherever we could.”

Along with an intellectual message, Bullough’s street-art is certainly recognizable due to his recurring pattern of a broken mirror effect.

“Combining the momentum of the one and the technical precision of the other, his work is about staging compelling contrasts and juxtapositions,” said art director and Artillery Magazine writer, Marieke Treilhard. “Working in everything from oil, spray paint and ink on canvas, Bullough’s paintings strike a balance between realistic figurations and stylized interruption. Disjointing the realistic elements with graphic areas and fractured or striated planes, Bullough intends to challenge the viewer’s perception.”

This year-old project is a bi-​​weekly inter­view show representing urban con­tem­po­rary art as a genre and bringing light to the artists who work so hard to keep the genre alive. The show is recorded in Berlin, Germany and is released every other Monday 3pm on Vantagepointradio.com. 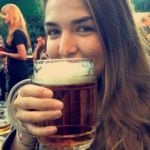 Becky Ingram was with RVA Mag in the Summer of 2015 and has continued writing for RVAMag.com and GayRVA.com ever since, mainly submitting festival coverage. She has recently relocated to Berlin, Germany where she works as a photo-journalist for a fashion photographer. She hopes that her B.S. in Economics from VCU and her international journalism experience will help her acquire a content manager position for VICE Video some day. Her interests include surf cinematography, gonzo journalism, and funky bass lines.
Topics: muralists, richmond mural project, RMP2015, RVA ARt