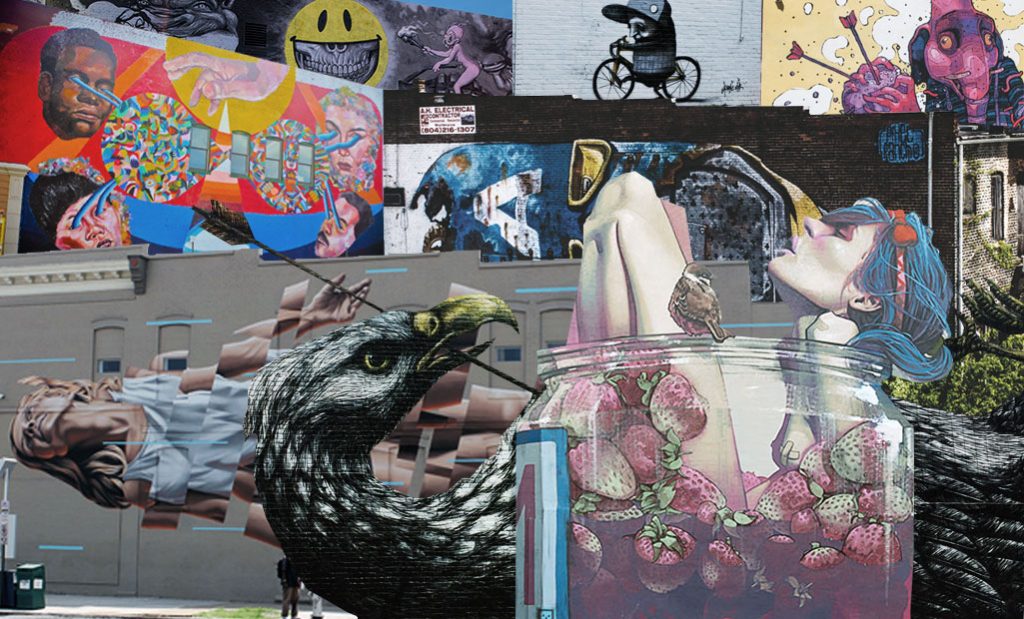 “Art shouldn’t be hidden. Art should make you think. Art has a tangible value on a community and can bring people together.” – R. Anthony Harris

After five strong years and achieving its original mission of 100+ murals throughout the city, The Richmond Mural Project (RMP) is scaling back a bit this year and painting one large mural on the VCU Honors Building. Since its inception, we’ve seen an excess of unique artists with different styles come from all over the world, bringing new life to the city’s dilapidated buildings and walls. It has been an important project for the city and has brought international attention to Richmond from all over the world and so RVA Mag’s founder R. Anthony Harris, who helped develop and implement the project, decided to take a look back at his time on the RMP and share a few stories:

‘Moonshine’ by Etam Cru, Poland
It is July 13th, 2013 and I am outside the 7-11 on Harrison Street interviewing the Polish duo known as Etam Cru. They hand me a 4 x 6-inch pencil sketch of a small bird, explaining that they’ll be painting a girl in a mason jar on the two story wall across the parking lot. Then they handed me even more sketches on even smaller bits of paper, while I try and imagine how this might come together.

As the next few days go by, people stop and stare at this new artistic monument being created – not many residents had ever seen a painting like this before.

After a few days, the mural is done and within minutes of posting the finished piece to Instagram it gets reposted across Europe, South America, and even as far as China. The positive comments from what we created in Richmond came flooding in from all over the world — I checked my phone for days, amazed to see our city mentioned as a global destination for street art. The accolades followed quickly with numerous articles from top publications like Buzzfeed and Wide Walls,

‘Fallen Eaglet’ by Roa, Belgium
The RMP kicked off in 2012 with an amazing lineup brought together by Shane Pomajambo of Artwhino. It was exciting to meet artists from around the world and have them here, but not all the artists felt the same. We spent a lot of time together talking about the world and the impact their work could make in a city like Richmond. The joint-smoking Belgian artist Roa had opinions for days on America culture and politics and had a friendly but intense discourse with the expressive, hand waving Italian Pixel Pancho, while Aryz, the quiet but brilliant Spaniard, would chime in between the debate — all three would put their thoughts on our city walls before they left.

Late one night, Roa and I were discussing the state of American politics over a spliff at the Crowe’s Nest. He had traveled the globe creating murals and gave me his view of how the US was viewed by the world. It wasn’t a kind assessment, and he brought that into his first mural in the city. He settled on painting a young eagle since it is native to Virginia and the US’s national symbol — then he put an arrow through its chest. I watched him paint this for days thinking is anyone going to be upset by what he is doing?

‘Captain Merica’ by Pixel Pancho, Italy
A few days later Pixel Pancho responded with this Captain ‘Merica mural down in Shockoe Bottom. I watched as his painting elaborated on a personal political statement for the US, forever enshrined on this two-story brick building in Shockoe Bottom — the decapitated head of a robotic Captain America left to decay. Again, I waited on anyone to bring up its meaning to me but after five years, no one has said a word.

‘Wall Eyed Elephant’ by Aryz, Spain
Aryz left his statement in The Fan with this mural — a diss on everything “American”. That year on the RMP, I had a feeling that Aryz wasn’t very thrilled, so when this stinky-wall-eyed elephant eating a spoiled hamburger was created, it felt like a farewell middle finger to the city. It was funny to hear the neighbors complain about its content while representing everything bad in the painting, the irony. Maybe they were Aryz’s inspiration? Who knows. This was his last completed work before he flew out of the city and never came back.

‘Connecting Force’ by EVER, Argentina
When this went up on Harrison Street on VCU’S Campus in 2014, I had a few people tell me this was their least favorite mural so far. I thought it was one of the most interesting with a message of togetherness between people under the watch of a higher power. When speaking with EVER, I found him to be a mellow soul and a positive spirit. People should give this mural a second look to reconsider its message.

The Characters of Stormie Mills, Australia
During my time at RMP, I met Stormie Mills. A man of many silver rings, chains, and necklaces, with wisdom, peppered locks, and a zen personality that drew people to him when we would venture out into the city. He painted introverted pieces of simple pleasures, little secrets, and conflicts. You can check out our interview with him from 2013 here.

‘The Grasshopper’ by Pixel Pancho, Turin
I could see an important piece of what we were  trying to do when Pixel Pancho started creating this mural on Hull Street in 2012. The area was ignored by the city and a bit run down, but when the paint started going up, the neighborhood came out in droves to support it. There were little kids running along the length of “the grasshopper” with their parents stopping to comment to their friends and family. Businessmen were coming out of their shops to see what was happening, while groups of teenagers were taking photos to send to their friends. Over the next few days, as Pixel Pancho worked, the mural became a point of conversation and something positive for the community. I remember thinking that art could transform any neighborhood.

Since that time, street art did change the Broad Street Arts District. Maybe it’s time to go back to Manchester and expand on what Pixel Pancho, the RMP and RVA Street Art Festival started over there? 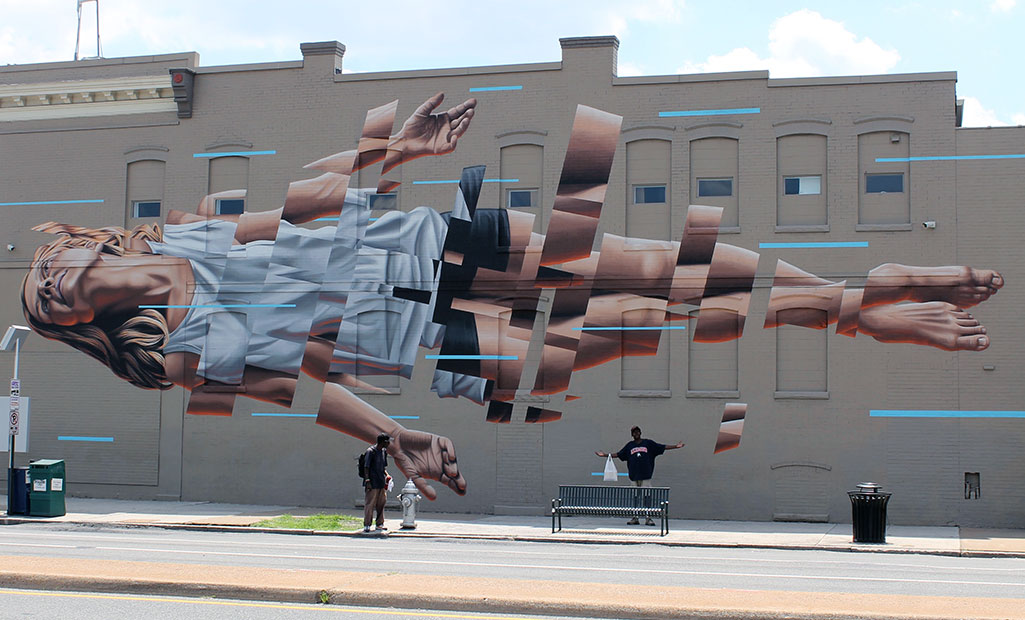 The Lady on Broad Street by James Bullough, Berlin
In 2015, we were allowed to paint a massive mural on VCU’s psychology building at the intersection of Broad and Lombardy. It was a big deal, getting VCU involved with anything takes time, and having that particular corner would be a prime spot for any artist. Situated on the bus line, at an incredibly busy junction with high visibility, James Bullough created an unforgettable work of art that is impossible to miss.

Once the dust settled, I got the interview here. You can check out RVA Mag’s rundown of Bullough’s work here.

‘Have A Nice Day’ by Ron English, Illinois
Meeting Ron English was a big deal. I had been following his career for over a decade as an activist artist with his ongoing POPAGANDA project and one of the first street artists to break into the main stream consciousness. He was full of stories — running around putting up art with an edge of fearlessness that I took to heart — you can listen to the full interview here. You can also read RVA Mag’s coverage of him here. His ‘Have A Nice Day’ mural was a hilarious statement against capitalism painted on a building owned by a mega corporation that’s based in town. I can’t believe we got away with that.

These are just a few of my thoughts from my time working on the RMP with Art Whino. The RMP has been vital to Richmond because ultimately art and the expression of ideas and concepts is important to the long term viability of any growing city. It connects people.

Until next time, I leave you with a video from the RMP.

Painting The Streets Of Jackson Ward

RVA Magazine #39 is on the streets now! In this article from its pages, Humble, Richmond’s longtime muralist, clothing designer, and... READ MORE

Would I Lie To You? Mural Walk creator George Tisdale unreliably narrates tours of Richmond's murals. It's more entertaining than you'd... READ MORE

Painting The Streets Of Jackson Ward

RVA Magazine #39 is on the streets now! In this article from its pages, Humble, Richmond’s longtime muralist, clothing designer, and... READ MORE

Would I Lie To You? Mural Walk creator George Tisdale unreliably narrates tours of Richmond's murals. It's more entertaining than you'd... READ MORE