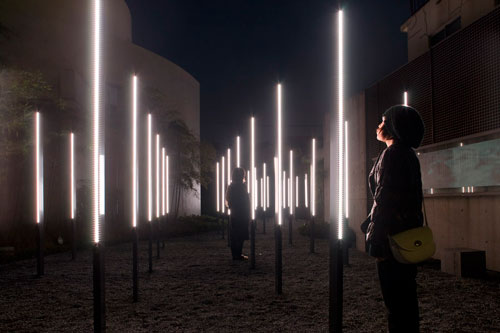 In looking through their projects, it seems like the UVA can dream an idea then pull the strings to make it happen. Their latest and greatest deal primarily with light and creating new spaces to explore. Take a minute to look through the videos of Deus, Chorus, Array and relax your mind for a few.

From the United Visual Artists site. 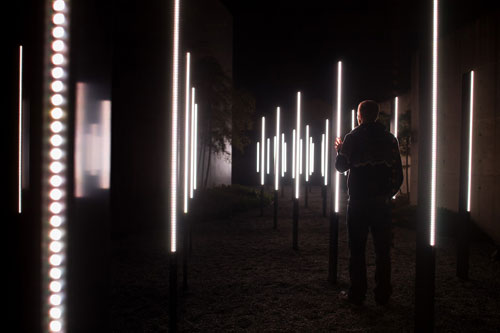 ARRAY
‘Array’ is a field of columns set in the courtyard of the Chuya Nakahara
Memorial Museum in Southern Japan. The columns create a field of
light and sound which gently shifts in response to the viewers’ movements,
via a hidden network of ultrasonic sensors. Each column is lit by a pure,
shimmering white light. This forest of light light calls you in, and its response
to your movement invites you to explore. Inside the grid lives a spirit,
in the form of a single pure red light. This spirit is timid but often playful,
revealing itself boldly then disappearing. 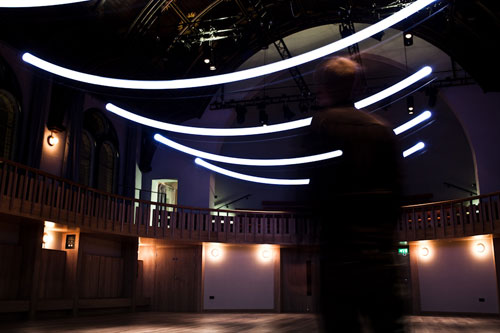 CHORUS
Commissioned to celebrate the re-opening of the Howard Assembly Room, ‘Chorus’ is simultaneously an intensely physical and yet ephemeral experience. An array of motor-assisted pendulums, suspended from the roof, swing through the space emitting light and sound. As the dynamic system evolves, the rhythms revolve through chaos and return to unison, producing a hypnotic and seductive performance that heightens the viewer’s awareness of the space and their relationship with it. ‘Chorus’ is effectively a new kind of musical instrument, one in which the spatial location of each sound is a critical part of the composition of the piece. 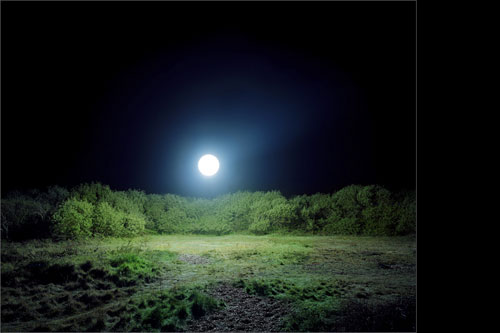 DEUS
UVA’s first photographic show explores the potential of light to redefine an environment, both physically and emotionally. The exhibition aims to distill the experience of UVA’s installation work into a series of striking, large-scale images. These photographs document a number of experimental light installations in secluded areas of Britain – huge artificial lights which are in sharp contrast to the natural landscape around them, creating an ephemeral new space.