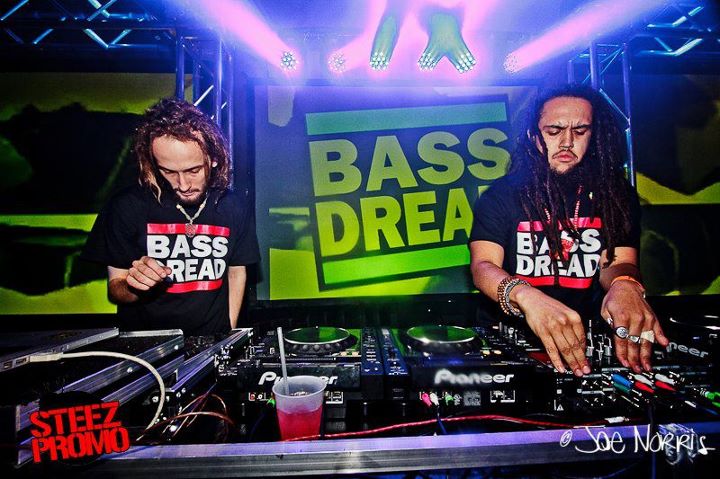 So I attended Dub101 at the Canal Club about two weeks back to rage and grab an interview with the dread-rocking duo from Baltimore, Bassdread.

So I attended Dub101 at the Canal Club about two weeks back to rage and grab an interview with the dread-rocking duo from Baltimore, Bassdread. When I first approached the table, early in the night, I was informed that Zeus The Sound Shaman was not there yet and was introduced to Halsey Ruckus. He immediately came across as both humble and passionate. “Props for being proactive with the scene, thank you,” he said, surrounded all the while by fans desperate for his attention. Many might see that as minuscule. However, in all my experience with artist interviews, I’ve never received that kind of positive feedback off the bat. He was so receptive to the idea of talking about his music and spreading the word. I couldn’t help but develop a level of respect for these guys, which would have been unattainable without meeting them. It all transferred to our interview, which was less interview than conversational discussion. It drew the brightest thoughts from the duo’s minds, and the whole time, I just felt like I was chillin’ with my boys. 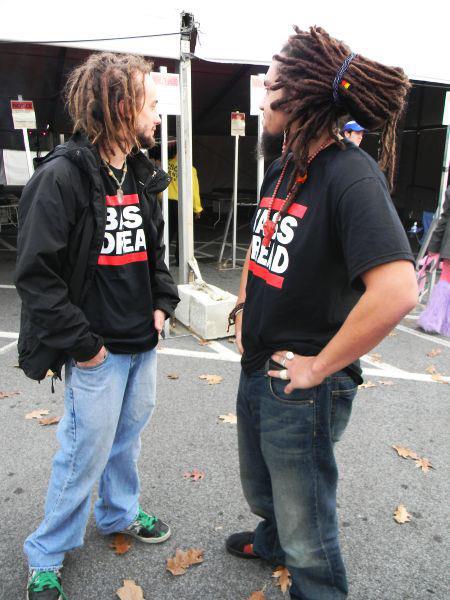 I know you two are relatively mellow guys behind the scenes. However, I see that you bring a ton of energy to your sets on stage. How does that translate, and how do you manage to turn the switch on and off like that?

Zeus: For me, it’s a different personification when you go from regular life to the stage performance. You have to be a different person, otherwise it’s not right. It can only come across as us doing what we have to do on stage to relate to the crowd, and how deep [the music] really goes.

Halsey: It’s a different side of you, honestly. When were partying with people, we’re just regular party people. But when it comes to performing music, like being a showman, it brings out that other side of you–the expressive side, the side that strives to bring it out of others, you know. The love that we have for our music, we want to bring that to everyone else.

I know you recently came out with a reggae rebel bass mix. Are you geared towards that reggae sound when you start producing? What kind of mindset do you go into production with? Are you thinking reggae first or what?

Halsey: That was only for one of our mixes. That was a mix where we wanted to meet a theme. The majority of our music actually isn’t focused on that. We were really paying homage to, I guess, the whole dreadlock aspect. The whole rasta appeal of it. For live shows, we cater to the crowd. When we made that mix, we were almost trying to push the boundaries on what we do, and go beyond what our regular formula is. We wanted to show range and the ability.

Zeus: I wouldn’t say we are geared towards that. It really comes down to where we play and who we are playing for. In terms of building off of it, it’s not necessarily a prime focus. Then again, none of it is a prime focus. What were trying to do is channel the energy to you as the audience, whatever that energy may be. 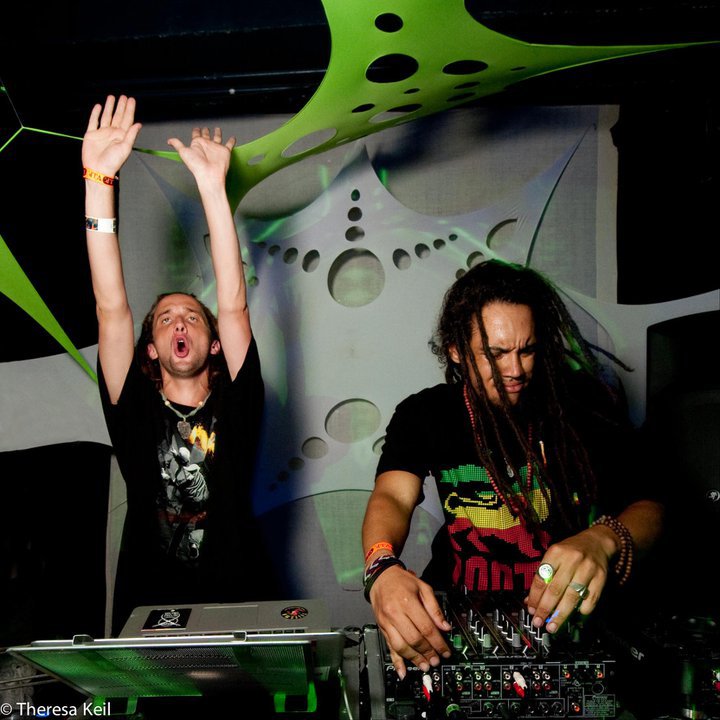 Halsey, I’ve seen on facebook that you have a knack for finding tracks and “digging”. Tell me about that.

Halsey: Well, I’ve always had this passion for not only finding music for myself that I’ve never heard before, but also for sharing this music that I love with other people, even before it was a live thing. I don’t know, I’ve always kind of been a nerd like that. I love finding shit that is premature to everyone, before it hits the main sites. We go on a lot of Russian sites. I actually know what [the word] download looks like in Russian. In Russia they don’t have the same copyright laws, so you go on those sites and it’s free flow. It’s all about digging deep.

Zeus: Probably about 5% of the tracks we play live aren’t found on Beatport. You can find undiscovered people everywhere. Everyone is trying new things.

When you guys are on stage, how do you go about splitting up the duties behind the tables?

Zeus: It’s almost all completely shared. Pretty much 50/50. What we’re trying to do when we play is to do live remixing, as opposed to the old DJ model [of] just playing two songs together. We try to really do, like, 2 or 3 minute mixing, where you don’t even know two different songs are playing together. Almost to create a new song.

Halsey: I focus on the controller, while he focuses on the effects and the looping. I do the core of the spinning, while he kind of handles the extracurricular spinning. A lot of people hate on the fact that we use all digital, we don’t beat match or use CD-DJs. The reason we do that is because we’re all digital, and that gives us more capabilities. Because of that we’re able to remix live, and be more dynamic.

Zeus: It’s just the old model. It’s like long division compared to a calculator. You could sit over there and write it all up, or you could just do it. 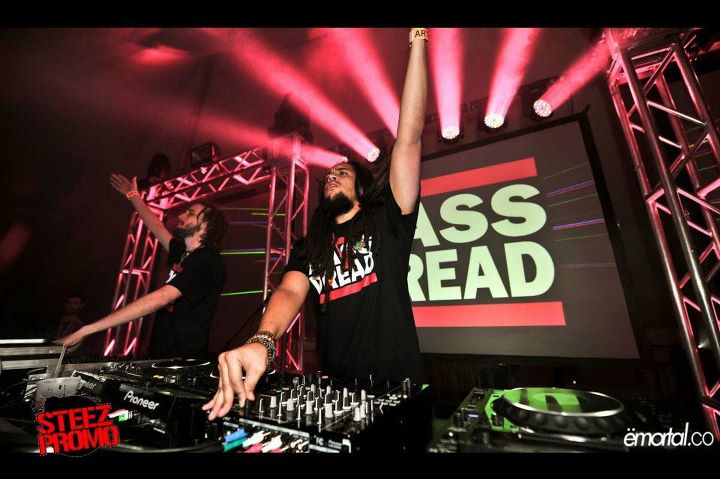 So how did the duo Bassdread come to be?

Halsey: Well, we were friends before we started spinning together. Then I moved out to Pasadena [MD], where he lived.

Zeus: It just kind of made sense. I was doing my own thing. Friendship always builds.

Halsey: Yeah, he was spinning, and then he realized that we had the same taste and passion for music, so he brought me in, and it went off from there.

Did you two start breaking out in the scene in Baltimore, or what?

Halsey: Our first show together was a private party in Baltimore. The city has been our heart and soul.

Zeus: It’s always been about Baltimore.

Any clothing line that has repped you guys with support and swag? 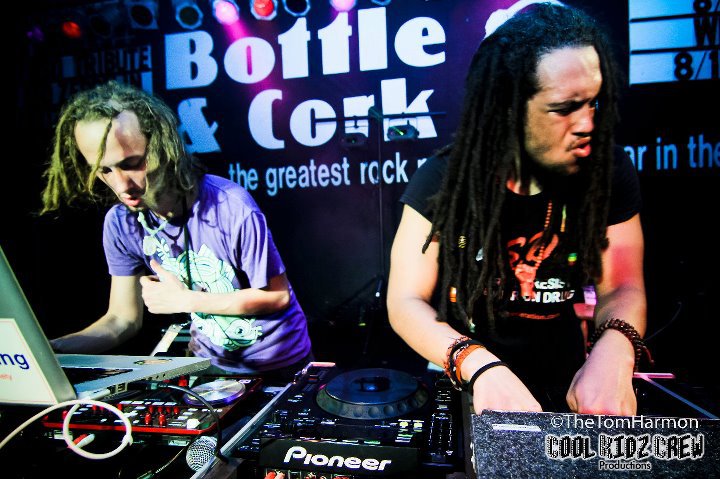 I know you two have shared the stage with alot of big names. Is there anyone in specific that has, maybe not inspired you, but it sticks out in your head where you left and were just like, “Goddamn, those dudes were fucking cool.”

Halsey: I’d say Minnesota was the closest one. There’s a lot of producers I like, but when they spin live, it doesn’t really impress me. But Minnesota, both of us have been influenced by him and he did a really good fucking set. We met him back stage at Dewey Beach, and he was a super humble and super nice guy.

Halsey: I like to be a part of the vibration that is the crowd, you know what I mean?

Zeus: There’s so many things that could go there [laughs]. I feel like I want to give some amazing response for this.

Halsey: There is one thing, and I don’t want to sound conceited when I say this. Some people sort of idolize us. They recognize Bassdread. So while I’m part of the crowd dancing, I’d like to not be that person, and just be one of everyone else. I want to be party people just like the rest of you.