Blacked Out At The Wedding: An Interview With Mikey Erg - RVA Mag 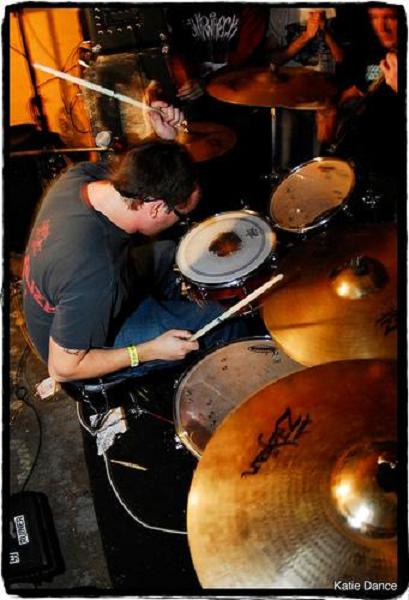 Mikey Erg plays more music than anyone you know. He was the drummer of arguably the most important pop-punk band of the last ten years, and he’s not stopping now that The Ergs! have run their course. He plays drums and guitar for countless bands between the east coast and the Midwest, and even spent a little time at Hadad’s last Best Friends’ Day working as Lemuria’s set list.

Mikey Erg plays more music than anyone you know. He was the drummer of arguably the most important pop-punk band of the last ten years, and he’s not stopping now that The Ergs! have run their course. He plays drums and guitar for countless bands between the east coast and the Midwest, and even spent a little time at Hadad’s last Best Friends’ Day working as Lemuria’s set list.

His traditional home is New Jersey, but after the Ergs breakup last year, he relocated to the Midwest. While drinking beers in a pool outside of Minneapolis, I asked him where he’s living now, and he couldn’t give me a straight answer. When he isn’t on tour, which is rare, he sleeps on various couches between Minneapolis, Cincinnati, and other pop-punk hubs in the Midwest. We crossed paths at Grumpy’s Pub in Minneapolis recently, where he was playing sets with the Dopamines and the Slow Death. After the show, we drank a liberal amount of cheap beer and Jameson and slurred back and forth about his musical past, present, and future.

RVA: Mikey! How many bands are you currently playing in? What bands? 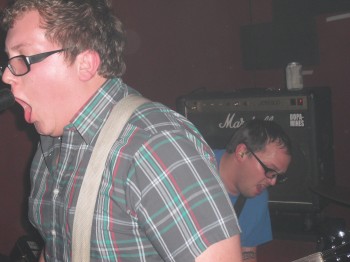 RVA: You play guitar and drums between those bands.

RVA: I had initially heard that you moved to the Midwest to stop being in bands. That’s obviously not the case. Why did you move here?

Mikey: Well, I moved here to kind of like…yeah kind of, to not be in a shitload of bands. And to be with someone and, you know, settle down. But then that didn’t work out and I just started playing in a bunch of bands.

RVA: How many shows would you estimate you play in a year?

Mikey: I don’t know. These are hard questions. I wish I actually kept track of that shit and wrote down every time I played a show or even made a record. I’ve been in the studio a bunch of times for records that didn’t even come out and stuff that I forgot that I recorded on. I’ll hear a record and be like, “God, I know this song. Oh wait! I had to fucking learn this song for like two months and then I played on that record and it never came out.” Weird shit. I don’t know. There was a while where I was playing probably at least 300 nights out of the year.

RVA: And let’s not even try to count the nights where you perform in multiple bands.

Mikey: Yeah, let’s not even talk about three sets a night or whatever. 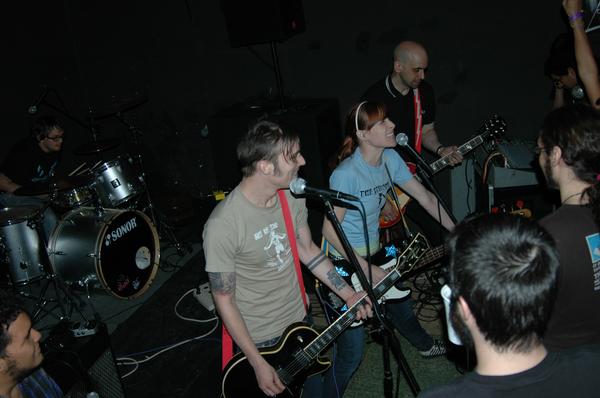 RVA: Do you feel more comfortable playing drums or guitar? You’re obviously talented at both.

Mikey: I am absolutely 100% a better drummer than a guitar player. I’m not the greatest drummer either. I have more fun playing the guitar because I like making feedback and I like jumping around and getting crazy. You can’t do that on drums. But I can certainly hold my own in like a rhythm guitar distorted kind of thing. But comfortable? I guess I’m more comfortable playing drums because I can do more on the drums, but I have more fun playing guitar.

RVA: There’s a reason your adopted last name is Erg. Will any band you ever play in ever make it to the level The Ergs were at or mean that much to you again?

Mikey: Well, mean that much to me? Probably not. I mean that’s the only one I can really answer. I don’t know if anything I’ll do will ever make it to that level. Mean that much to me? Absolutely not. That was the band that like…I grew up with those guys. There was a thing there between the three of us. Even when we became The Ergs we would like try to add another guitar player or something and it just wouldn’t work out. Like, nothing felt right except for when the three of us were playing. I’ll absolutely say 100% to my grave that the three of us, there was something there that will never again happen in my life. I know that for a fact. There was something there between the three of us that will never happen again in terms of like, three people getting together sharing ideas. There’s a certain point where stuff like that has to break down and go away. In terms of playing, I’ll never play with two other people who know exactly what I’m going to play before I play it again. We would have practices where Jeff would play a song and I’d start playing drums and he’d be like, “That’s exactly what I was going to tell you to play there.” Or I’d play a drum part and be like, “That’s pretty much exactly the riff I wanted you to play there.” You know, something like that will never happen again between three people. Success wise, we worked really hard to get where we were, and it took a long, long time to get there – seven years or so. You know, we weren’t the hugest band in the world but there was definitely a point when we realized people were listening. I don’t know. That’s never going to happen again – that whole thing. Not for me, at least. So, short answer is no, on all accounts. Have fun transcribing that. 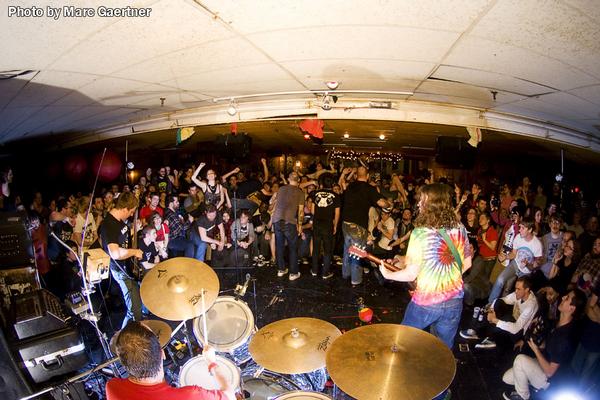 RVA: I heard you guys got together and played a set, though quite the drunken one at Jeff and Miranda’s wedding.

Mikey: What, no The Ergs played a drunken set at our friend Dan’s wedding. Did we play at Jeff’s wedding?

RVA: I had heard that you had.

Mikey: There are a lot of rumors in New Jersey. No. Well, I will go on record as saying I drank Jameson whiskey in the van and missed dinner because I was passed out in the van. I was blacked out during the wedding so we may have played. I can’t truthfully tell you that I know we didn’t play, but I don’t think we did. I think I would have read about that on the internet.

RVA: Do you see any other reunions happening?

Mikey: I will also go on the record and say anytime, anywhere, I will do an Ergs! reunion and be happy about doing it. I can’t speak for the other two people, but I don’t think so. At this moment, it doesn’t look like that would ever happen again. I would love to do it. I mean, we got together to do The Hamiltons, who aren’t us, but they kind of are, for Insub Fest and it was fun. Whenever we get together in the same room we just become what we were in the beginning: bullshitting about the Simpsons and bullshitting about our favorite records. And it’s fun, it’s not weird. The Ergs got weird and we got like… it became more of a business situation. It wasn’t fun anymore. It was more like, “People are listening, let’s do this and let’s make records and let’s do that.” It made it less fun. When we started we were like, “Hey, let’s show up to this show and play a Black Flag song for thirty minutes and not fucking care.” Once we became a band people cared about it was like…I mean that was fun too. Every Ergs show I ever played was fun, but it became where we were thinking more about people who were watching us than ourselves. And I think the most successful bands think about what they would want to do and what music they would want to listen to. I can only speak for myself but I was thinking about pleasing the people who were watching us and what songs they would want to hear. I’m also Mr. Nostalgic, so I would go back and play with any old band I’ve ever been in just to play those songs again because I love playing music and I love every band I’ve ever been in. And at the time, if I had to leave a band for any reason, there was a reason and that’s fine, but I still love the music and I still love playing it. I’ll do an Ergs record or tour anytime anyone wants to do one. And hopefully there will be a point where we say, “Let’s fucking play a show in New Brunswick. Let’s go practice and play a show. Like, why not?” That’s how I feel: why not? Let’s do a reunion. So hopefully, but I’m going to say, probably not. 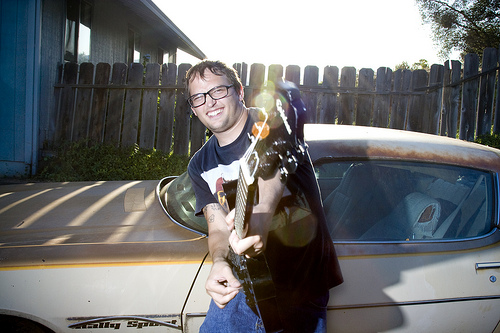 At this moment, we are approached by Mikey’s bandmate, Jon Weiner of the Dopamines.

Mikey: That’s not a good idea.

Mikey: That’s a bad idea. Can we go to White Castle before that? I need to eat, badly.

Jon: Okay, then we’ll go to White Castle and then Triple Rock.

RVA: It’s at worst, a half decent idea.

Mikey: It’s probably a bad idea, but I’ll go wherever you guys are going.

Jon: Did you hear that the lead singer of the Hold Steady is here?

RVA: Real quick, final question. What are you most looking forward to at Best Friends Day?