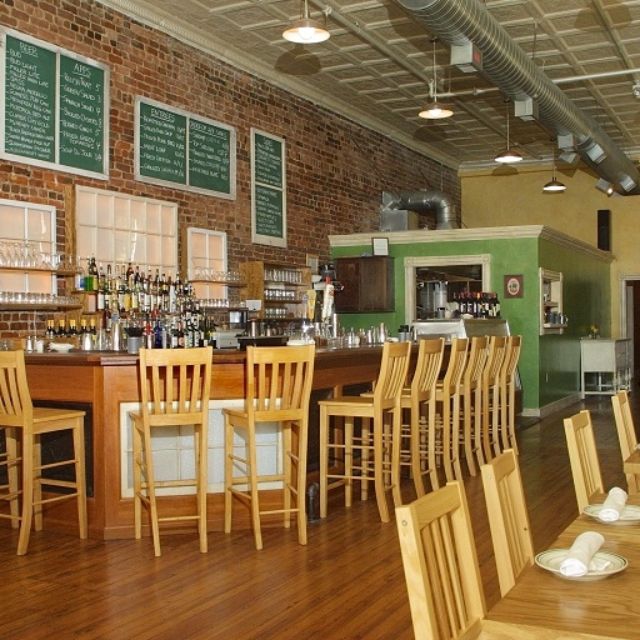 The last time I went to Comfort was several years ago, and I remember it not being great. Walking into that restaurant again, I expected to have a meal on par with Cracker Barrel or Bojangles–something resembling a Southern restaurant food chain that was at least edible. But Comfort, a Southern-style restaurant on Broad Street that’s been around since 2003, surpassed my expectations of how much it was going to suck.

This restaurant may have been featured in the New York Times and Southern Living, but to offer a small spoiler alert, we tossed our leftovers into a dumpster the second we turned the corner.

After getting our drinks, we ordered two appetizers: the mixed fry, a basket of fried green tomatoes, okra, pickles, and sweet onions; and the smoked confit chicken wings. We only received one of those appetizers, because despite arriving 30 minutes after the start of service, our waitress informed us the confit wings weren’t ready yet.

To give Comfort the benefit of the doubt, it’s important to understand how restaurants work. Chefs usually send in new food orders after the weekend, and most trucks deliver on Mondays and Tuesdays. The kitchen may have run out of wings from the weekend, or maybe the truck was late that day and they didn’t have enough time to prepare the smoked wings, which is a long, involved process, so we’ll let that one slide.

The fried appetizer wasn’t bad, it was just boring. There was nothing interesting about it, and it tasted like fried salt. Fried salt that cost $10. The only part of the basket that had any taste in it were the pickles and onions, but those are difficult to mess up. The tomatoes were soggy, and the okra kept its classic slimy texture. I expected the okra to be slimy since most kitchens half-ass everything, and cooks don’t usually take the time to wash it, cut it, and dry it. But at least everything in the appetizer was edible.

For our entrées, we ordered the roasted chicken breast with sides of mac and cheese and green beans, as well as the fried catfish with sides of black eyed peas and squash casserole. The side choices with entrées are optional and are chosen from a list of seven sides. 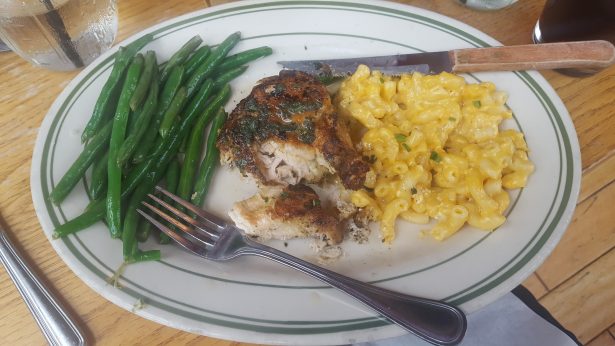 First, let me explain something about catfish. Catfish is a disgusting fish. It’s a slimy, snot-covered river fish; However, when properly cleaned and cooked, it becomes the classic Southern dish we know and love, and certainly belongs on a Southern menu.

Unfortunately, the catfish served to me at Comfort had not thoroughly gone through this process. The fish didn’t taste like anything but breading, which is typical at any basic Southern diner, but at least you can go to one of those and get catfish for $5. This dish was $20 and still had a worm lodged into its flesh, as well as several pieces of skin clinging to the meat. I still ate the other side of the fish, but the parasite was in there.

The side of black eyed peas tasted sour and old, and that’s the only thing it tasted like. I can imagine the majority of sides ordered here are either coleslaw or mac and cheese, so the black eyed peas probably aren’t ordered as often. I’m guessing they were about ten days old.

What happened to the squash is a more tragic story. Assuming they cooked it on the stove, I’ll conjecture that the bottom of the pot burned when someone wasn’t paying attention and the underside was charred. Sometimes you can catch these mistakes and scrape the unburned squash off the top and it can still be good, but this tasted like I licked the bottom of a burnt pan. You can’t do anything about that other than throw it away and start over, which is what they should have done. Squash is not terribly expensive, so the only reason they wouldn’t have recooked it is because they didn’t feel like it. It didn’t have any flavor other than burnt and old.

I don’t know how you make chicken skin soggy and the meat dry at the same time, but they figured out how to do it. The dish consisted of an airline chicken breast, meaning the wing is still attached to the breast. It’s an easy piece of meat to screw up, especially when you’re busy line-cook, since the wing and breast cook at different speeds. But they managed to make the whole piece dry enough to be impossible to chew while the skin was complete mush.

The macaroni and cheese was without a doubt Kraft, and was honestly the only edible thing we had. For the $19 that the entrée cost, you could have bought five boxes of Kraft mac and cheese and saved yourself the trouble.

The green beans weren’t cooked, but simply heated up and coated in butter. No garlic, no onions, no lemon juice, not even salt and pepper were added. In fact, nothing we ate was seasoned, none of our entrées had a bit of salt on it. We almost used half the salt shaker before we were halfway done with our meal, at which point we decided that simply leaving hungry would be far more pleasant than continuing to eat.

Our waitress was sweet and attentive, but she, like the entire experience, was half-assed. Her lack of knowledge even about their list of draft beers was surprising. When we asked if they had a draft pilsner, she couldn’t produce an answer and had to turn to a menu.

It’s actually hilarious that Comfort’s sister restaurant, Pasture, was recently named best restaurant by Southern Living magazine because co-owner and chef Jason Alley clearly doesn’t give a care about what actually gets put on the table. And after my multiple trips to the restroom a few hours after my meal, I guess I don’t really give a care either.