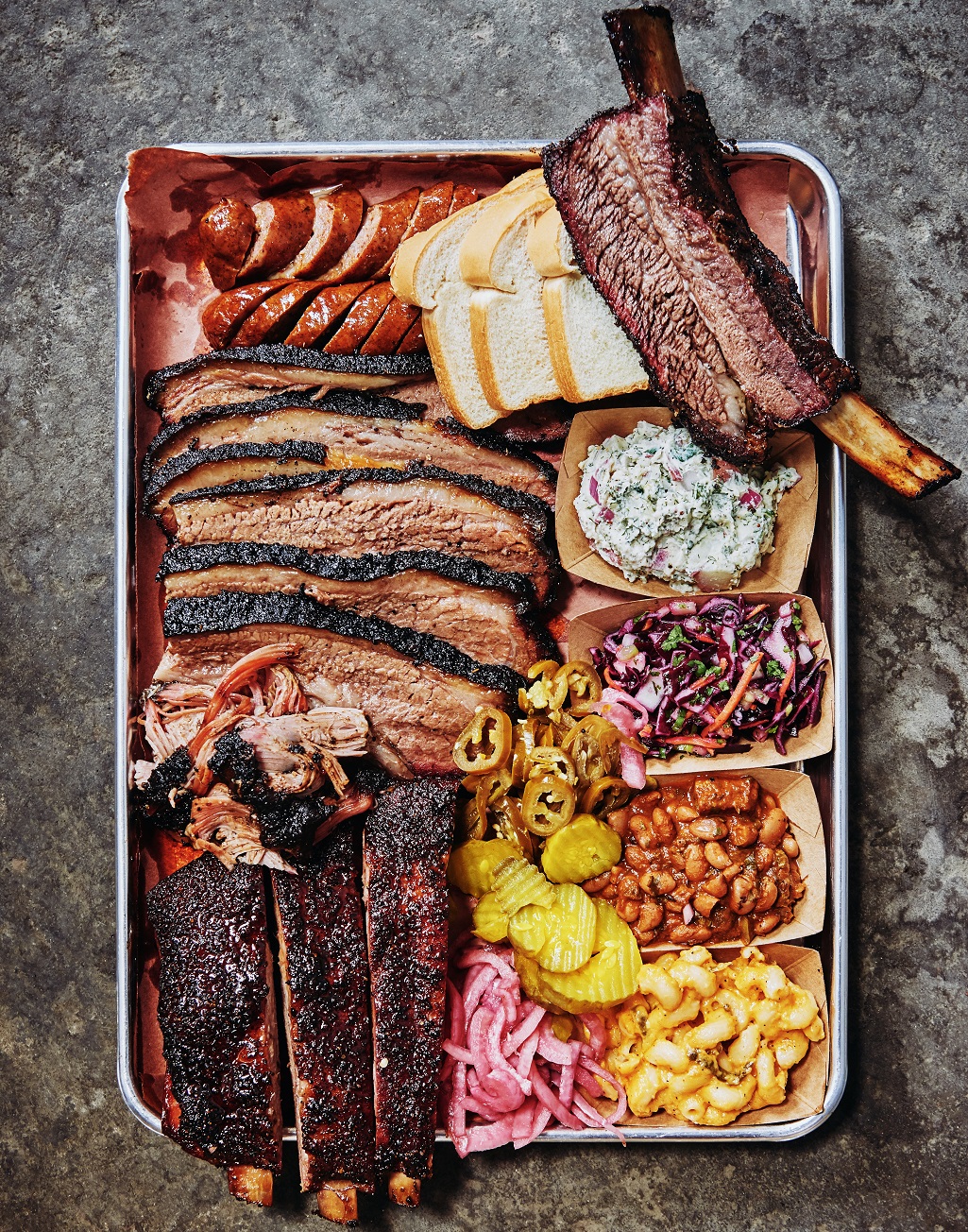 If you’ve driven through Scott’s Addition on a Friday night, chances are the alluring aroma of smoked brisket in the air has piqued your interest. You may have also seen the giant wood-burning smoker being hauled into Ardent Craft Ales every other week with nothing but a line of people as far as the eye can see.

For four years, local truck ZZQ has provided barbecue to Richmonders, catering weddings and other private gigs, and for the last two they’ve parked their smoker, dubbed “Mabel,” at Ardent to serve up Central Texas-inspired smoked beef barbecue. In the fall, the husband and wife team will launch their business into the next phase with their own restaurant on West Moore Street, just behind the brewery that fueled their success.

“The thing about Ardent was, that environment was exactly the kind of place, culture that we envisioned for ourselves and it fit the model of what inspires us in terms of barbecue, which is Central Texas barbecue,” said co-owner of ZZQ Chris Fultz. “If you think of barbecue joints in Austin, there’s always a really cool comfortable place to hang out and eat your barbecue at a picnic table or some lights. That was a hand and glove kind of fit.”

Of course, it wasn’t just the brewery’s atmosphere and patio that drew the duo to the space, the beer pairing with the barbecue didn’t hurt either. “The beer is such a big part of the culture in Texas too, in a lot of barbecue joints they give you free beer while you’re waiting in line,” Fultz said. “While our customers are waiting in line for us on a Friday night after work, Ardent would bring them beers in line, and the lines started getting longer and longer and we were selling out quicker and quicker.” 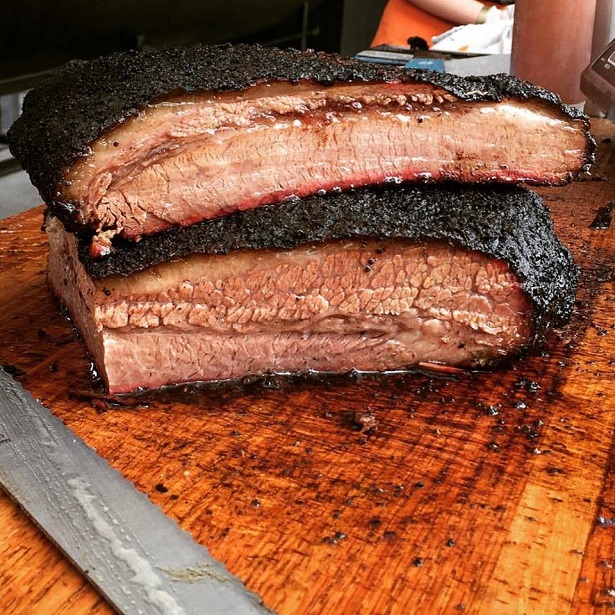 Fultz, born in Austin, grew up outside of Dallas eating the same barbecue he now so warmly and pridefully cooks and serves to Richmonders. For those who’ve never tasted it, Central Texas barbecue differs from North and South Carolina and Virginia styles.

“Texas-style barbecue started with German and Czech immigrants in and around Central Texas,” he said. “It was kind of an off-shoot of a butcher or meat market, one of the least desirable cuts is brisket because it’s such a tough muscle.”

The style is stripped down with meat, mainly brisket, being the focus. Sides play second fiddle and the sauce is not even considered in some places. The way it’s prepared is the major difference, however. “One of the biggest differences in what happens in this part of the country and the way they cook and the way we cook. We cook on a traditional offset smoker, and it’s all wood, there’s no secondary heat source,” said Fultz.  “It’s all old school techniques.” 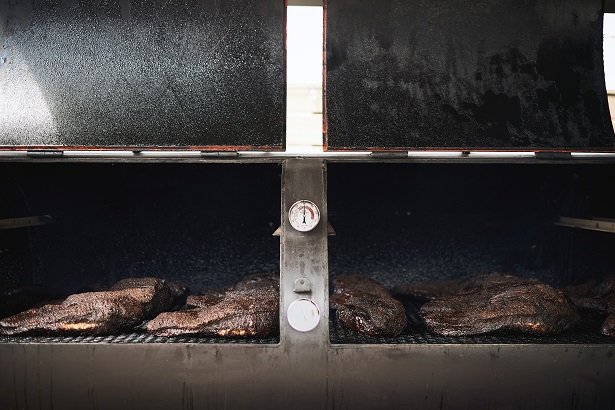 Fultz began honing those techniques in Austin 15 years ago and after moving to Virginia to attend grad school at UVA, he soon got a job in Richmond and realized beef barbecue was few and far between here.

“I called my dad and I said, ‘how do you cook a brisket’ and he told me what he knew, I just kept trying to perfect it…that carried me through several years and parties taking brisket to friends,” he said. “’I went to one party and some guy said, ‘you really should think about doing this for real, I’ve never had anything like this.’”

Around that time, he met Graf who championed the idea for ZZQ which is when the business officially took off. “We were doing these underground backyard pop ups which enabled us to experiment and kind of hone our craft and cultivate our original customers and fans,” said Fultz. 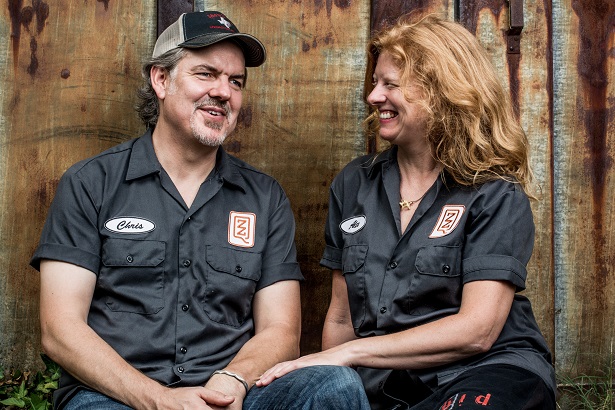 Word began to catch on about their smoked barbecue and they’ve been selling out at Ardent Craft Ales ever since. Graf and Fultz parked “Mabel” on Thursday at Ardent and smoke all night and serve all day Friday. “People would actually help us and pull her out and that’s how Friday nights worked for that first year we were there,” Graf said.

But as they became more well known in the food truck scene after that first year passed, “Mabel” could only feed so many hungry barbecue fans so the two decided it was time for a bigger project. 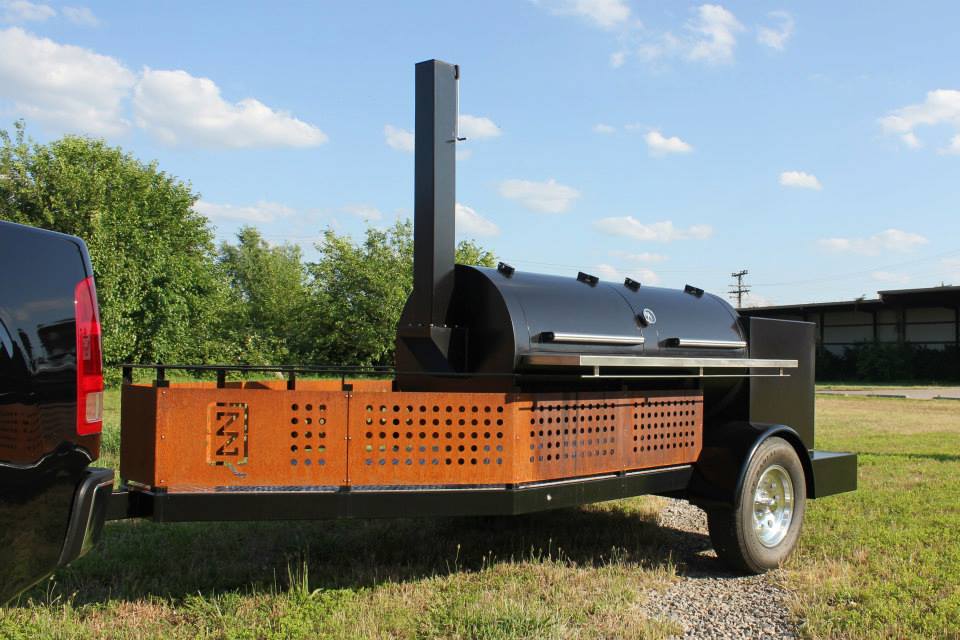 “We could only serve about 150 people max on our old smoker so we would run out of food too fast, we had a lot of people in line still wanting food,” Fultz said. “That first year gave us the courage to invest in a smoker three to four times the size of our first smoker.”

The two had a new 3,000-pound smoker named “Maxine” made outside of Austin and revealed it at the grand opening of The Veil Brewing Co. in spring of 2016, which allowed them to feed 1,200 people. Once they had the new smoker, Graf and Fultz decided to shift their vision into high gear. After checking out a few spots in that area, they decided to build a new restaurant from the ground up in Scott’s Addition.

“We wanted to be in Scott’s Addition, we’ve both always loved this neighborhood, we love the character, the diversity of the businesses, the industrial quality, the accessibility from the interstate, the city,” he said. “Ardent opened our eyes to what it could be with that patio.” 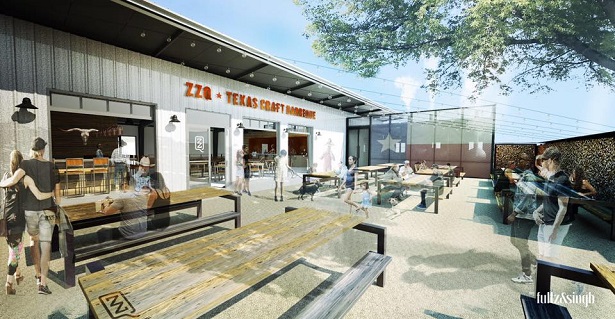 A friend of the couple’s owned the land on Moore Street and was just using a few buildings for storage. In April, the duo demolished what was left and started work on their brick and mortar spot. ZZQ’s restaurant, which will be a pre-fabricated metal building like those you’d see in Texas, will seat 90 people on the inside and 90 on the outside on their patio which will connect to Ardent’s parking lot.

Both work as architects at their firm Singh and Fultz and from the way they describe it, they aren’t just aiming to draw crowds with the food. The couple is hanging on to one brick wall from the previous buildings that will be the backdrop of the smokehouse along with a metal shed which will house their smokers.

“It fits with the neighborhood, also with the industrial feel and it gives us a real open plan because that open feeling is really important both in the patio and inside,” said Graf.

It will be a full-service restaurant serving up all their signature dishes cafeteria style, a nod to Texas-barbecue joints. “You build your tray, so in Texas, you go to the meat cutter first and he asks you how much you want of each and then the next person builds your sides and you go down the line and pay,” he said. “We’ll have two meat cutters and two or three staff on the sides.”

The restaurant will also have a bar in the second half which will seat about 12 people and focus on bourbons, tequilas, mescal and craft beer primarily from regional breweries and Texas. “We’re going to be serving Lone Star beer which is a staple of any Texas barbeque joint,” he said. “We’re going to be selling off premises so you can come by a case of Lone Star and take it with you.” 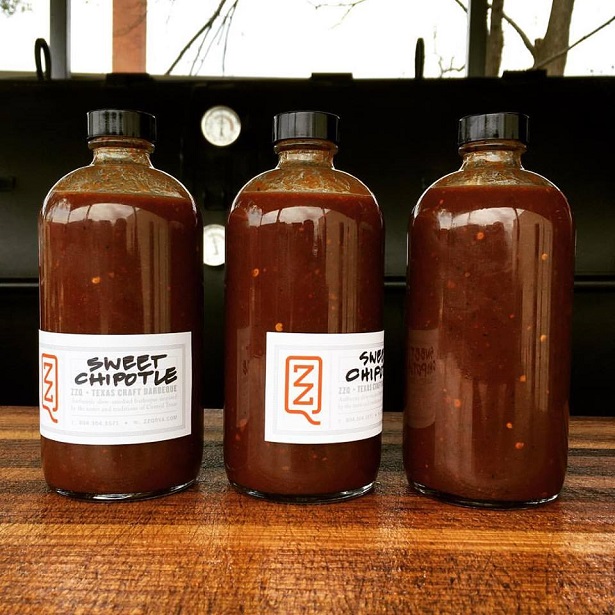 And don’t expect to have a never-ending selection of sauces to douse on your brisket, Fultz thinks the barbeque should speak for itself.  “I’m not a believer in a lot of sauce…you need two or three staples and that’s all you need,” he said. “Texas sauces have tomatoes, but it’s not sweet, it’s thinner and [has] more vinegar in it, salt and pepper and we put chipotles in ours to give it a smokey flavor.”

When they get up and running sometime in early fall, expect to see additions to the menu like duck, pork steaks, smoked prime rib and brisket tacos. Graf and Fultz also plan to continue collaborations with local cideries, meaderies and other businesses in Scott’s Addition.

ZZQ is currently under construction at 3201 W. Moore St. You can keep up with their progress and opening date here.