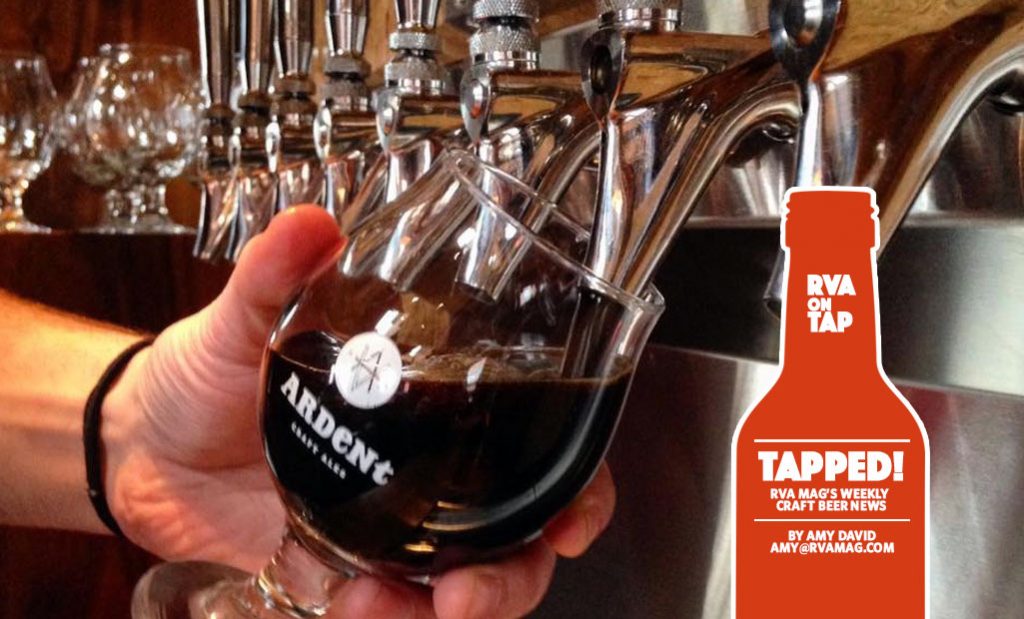 Our cup is overflowing with news this week from releases, to events, and other cool happenings around town, so hold on to your mugs because we’re getting ready to tap this thing! (You can check out last week’s releases here.)

Lickinghole Creek will host a Pets & Pints benefit event for Goochland Pet Lovers this Saturday at the brewery.

The organization who is raising funds for the development of a new state-of-the-art Adoption, Care, and Education Center. This facility will serve as the hub for innovation adoption and education programs. Festivities include a Raffle, Pet Adoption Area, Local Vendors and Live Music.  The brewery will also  release theirr Magic Beaver Belgian Pale Ale. A portion of all sales will be donated to Goochland Pet Lovers

Ardent Craft Ales will release its Rye Kolsch this Saturday. This beer was originally conceived and created by our own taproom manager, Lincoln Smith. The kolsch style comes from Cologne, Germany, and is brewed with ale yeast, then lagered in the fermenter for five or six weeks.

The brewery will also release a dry-hopped session saison on Tuesday so mark that on your calendar!

Triple Crossing will release its All Neon Like IPA this Friday. This is their new IPA hopped exclusively with Galaxy hops and will be flowing at the Fulton location.

On Sunday, The Veil Brewing Co. will have another seafood pop up featuring raw oysters and crabs from Northern Neck Oyster Co. 12-3pm.

And on Thursday, Three Notch’d Brewing RVA Collab House is back with yet another collaboration. This time, they’ve created “Candela Unbound,” a fruity IPA in partnership with Candela Books & Gallery.  The photography gallery recently celebrated their 5th Anniversary and their annual Unbound! fundraising gala will be held July 22nd (7-11pm). Proceeds raised will be used to purchase select photographic works from the exhibition. The Candela Collection will, one day, be donated to a significant permanent collection. Collab taps at 5pm, Brewer’s Toast after 6pm and we’ve got pint specials on the 1st keg until it kicks or until 9pm.

Blue Bee Cider will host Spider-Q BBQ this Saturday who will serve up an array of pork, chicken and sides. The two have also collaborated on a sauce featuring Blue Bee Cider’s cider.

On Saturday, Steam Bell Beer Works will release their Brandy Barrel-Aged 1964, a collaboration with the Ladies of Lager . It’s a white sangria-inspired Belgian Tripel fermented over raspberries, apples, grapes, oranges and pineapple. We threw this batch into brandy barrels for several months and the result is a rich, smooth, and creamy experience

Garden Grove Brewing Company will release a special Game of Thrones beer for all you fans out there this Wednesday. The White Walker IPA is a 6.3% blend of Wheat malt and VA malt accented with Meridian, Sorachi Ace, Centennial, and Calypso Hops which come together to create the perfect lemony summer IPA that could brighten even the iciest White Walker’s heart. The brewery will also host Game of Thrones trivia tonight at 7:30 pm with prizes.

Last, but certainly not least is Stone Brewing with some of the most exciting news of the week. The brewery announced it would hold its first music and beer fest, “Stone’s Thrown Down in RVA” on Brown’s Island in September featuring craft beer, food trucks, lawn games, and a stacked musical lineup including No Bs! Brass Band and Lettuce to celebrate a year of them producing beer. Read our story on it here.

Any submissions or releases for Tapped can be emailed to Amy at [email protected] Cheers!