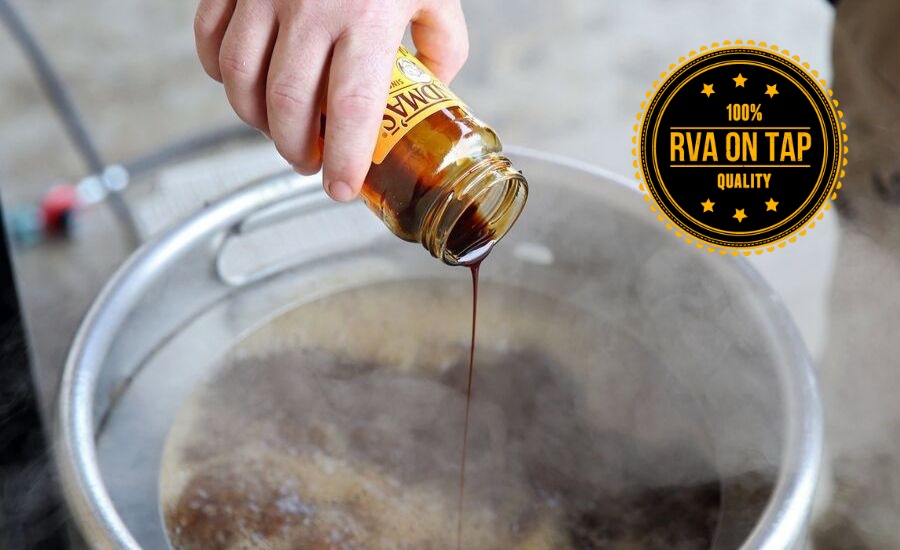 This week, we’ve got more coming for Oktoberfest celebrations, plus some delicious beer releases happening around town… like The Veil’s black-colored lemonade brew and the famous Hardywood Gingerbread Stout heading back to town.

The very beginnings of fall are still popping up, especially in regards to the Oktoberfests galore happening across the city. Over the weekend, a large festival came to the grounds around the VMFA, and this weekend another huge one is coming to Center of the Universe Brewing.

On Friday and Saturday, head out to our favorite Ashland spot for this free event packed with traditional live German music, German-inspired food, German-style brews, plus the 2019 Das Bier Run on Saturday and more surprises. Friday’s music will be provided by The LOW’n’BROWS — a German “Oompah” band from Fredericksburg who, after 21 years professionally playing the music style, specialize in polkas, waltzes, and other traditional “hofbrauhaus” music, according to COTU.

“Grab your lederhosen and your beer steins!” says the brewery, because Saturday keeps the party going. All day long from 12pm-10pm, the inside of COTU’s taproom will be turned into a traditional German festhalle as the Das Bier Run gets started. And the best part: the beer! Oktoberfest, their take on the classic Munich fest biers, will be on draft. It’s made from German Munich and Vienna malts to add a sweet, malty flavor to its toasted notes. Also brewed with Czech yeast to bring out the malt, German hops were added to give it just enough bitterness to round out the flavors.

Canon & Draw Brewing has *really* been killing the new brew game lately. With stellar variations all over the board, this week they’re dropping a special one on Friday.

Coffee w/ Room, an American Milk Stout, is a juiced-up version of the classic stout DNA. This 8% ABV milk stout starts off with a roasted-chocolate base that brings in several caramel malts, which gives it a rich and complex foundation. Next you’ll taste its creamy sweetness, made with a large addition of lactose and packed with locally-roasted and coarsely-ground coffee from Rostov’s.

Full of dark chocolate flavors and its delicately-roasted Ecuadorian coffee, this beer has a “light and bright” acidity, according to the brewers, from coffee blending seamlessly with the malty chocolate base and sweet cream finish.

If you’re a football fan and you’re trying not to miss the game, they’ll have three TV’s out so you can drink and enjoy while catching every minute. They’ll also have games like foosball, darts, arcades, corn hole, and more to entertain attendees, plus prize pack giveaways with free merch, glassware, and gift certificates.

Cafe 804 will be providing the eats for the occasion, so come out to grab one of your favorite Three Notch’d brews and celebrate with them.

Hardywood’s got a great new beer coming up this Friday, with their Benny & The Fest can release. Also — did you know that Hardywood was recently voted Richmond’s favorite brewery? No surprise there, because everything they do is delicious, and this one’s no different: Benny & The Fest is a lighter 5.8% ABV marzen lager, and it’s malt-forward with a nice, light sweetness. As the crisp air of fall starts rolling in early next month, it’s “a great treat to pair” with the cooler temperatures of fall.

And in even *better* news, Hardywood’s Gingerbread Stout series is back!!! Pre-sales began this Monday, and complete sets are on sale now. They’ve got seven new variants for 2019, and they sound even better than last year: with special variations like Christmas Pancakes with maple syrup, Christmas morning with Mexican Chiapas coffee, Fluffy GBS with marshmallows, and Frosty GBS with white ginger and local honey. Also, all the whiskey-lovers out there can look forward to Kentucky Christmas Pancakes (take your regular pancakes, and add bourbon to them), Christmas Island with Toasted Coconut, and the classic Bourbon Barrel GBS.

Also this week, Hoax comes out at Hardywood on Saturday! This 13.5% — yeah, you read it right — Barrel-Aged Milk Stout just spent 9 months in freshly-emptied brandy barrels, and it’s a “behemoth” of a beer according to the brewers. It joins their crew of misfits, Trickery, Foolery, and Ruse, which are some of the highest-rated milk stouts in the world. Now’s your chance to come get a fresh taste of their next sibling, so don’t miss it this weekend!

Tons of local breweries will be in attendance, like Ardent Craft Ales, Bingo Beer Co., Fine Creek Brewing, Hardywood, Lickinghole Creek, Kindred Spirit, Starr Hill, and Three Notch’d — plus some of my faves from elsewhere around the state, like Blue Mountain Brewery, Random Row, and more!

Fresh out at Väsen Brewing Company this week is Mosaic Secrets, a brand-new brew hazy Triple IPA that keeps these last warm days of the year alive with its mango and passionfruit aromas.

The flavors were created through the hopping process with Vic Secret and Mosaic hops, and if you’re looking for a taste of your own, you can get one at the brewery after its release last night. Head over to the brewery for board games with friends, one of Väsen’s favorite pastimes, or bring your own games instead of diving into their “treasure trove” with a beer in hand.

Another recipe of my favorite brew style is making its way to Steam Bell Beer Works this Friday evening. Subrosa, a New England-Style Double IPA, was created with what Steam Bell calls a new-to-us hop combined with a decadent hop-bomb:

“Cashmere hops are fairly new on the scene, but making a splash (pun intended) in the IPA game.”

In Subrosa, you’ll catch some deliciously tropical notes to complement its higher 8.9% ABV, from peach to tangerine, and pineapple to other citrusy fruits. It was also double dry-hopped with Amarillo and Mosaic to bring out an extra dose of fruit.

More news at Strangeways this week brings the release of SMaSHing Simcoe, a Double Dry-Hopped IPA (my favorite!) that came out over the weekend, brewed with a single malt and single hop variety to showcase the character and versatility of its ingredients. You’ll catch an aggressive bitterness from the Simcoe hops, rounded out with a resinous, piney and dank flavor through its double dry-hopped process.

Fresh to Ardent Craft Ales is Old Molasses Ale, a historical combination that was brewed up in collaboration with the John Marshall House. The ale was based on a recipe from John Marshall’s cousin, Mary Randolph, “that she brewed in the late 1700s and featured a late addition of molasses in the boil.”

This 4.6% ABV Brown Ale drinks easy, according to the brewers, and has a low bitterness that brings out its delicious notes of molasses both in its taste and its smell. There’s only one keg available of this special brew, so make sure you get a glass while you can!

Last night at The Veil Brewing Co., another multi-release went down, with brews I can’t wait to get a taste of. First up for us is Use Me, a Double IPA (yum) brewed with Mosaic, Motueka, and Nelson hops, along with its large additions of oats and wheat — and at 8.5% ABV, this one’s riiiight up my alley.

They also released Charcoal Yella Lambz, a Charcoal Lemonade-inspired Sour beer that was brewed with milk sugar, lemon peel, lemon juice, activated charcoal, and lemon purée. Could there be any more awesome ingredients in one beer? This one comes in lower, at 4.5% ABV, so it’s the perfect beer to drink like a glass of lemonade and keep things light — although it’s completely black in a glass.

Not quite like its redmiata sibling, greenmiata is a luxuriously-hopped IPA that returned to The Veil last night in all its flaked barley, Simcoe, and Citra-hopped glory. At 6% ABV, greenmiata comes in somewhere in the middle on alcohol percentage, so it’s a good brew for most folks looking for a taste.

Now here’s a phrase I know a few people could stand to hear: Who Hurt You? This brand-new Double IPA debuted at The Veil last night and, brewed with malted oats and raw wheat, its taste is as delicious as its wheaty, creamy color. It came together with Galaxy, Nelson, and Citra Lupulin Powder to hit in at 9% ABV.

This Friday at Intermission Beer Company, ArtoberFest is dropping as a new release in their variation of an Oktoberfest beer. This one was brewed up in collaboration with CultureWorks and ArtoberVA, and a portion of its sales will go back to the organization at CultureWorks, too — and what’s better than drinking for a cause? You’ll get to grab food from the Good Doggie! food truck at the release as well, with German Beer Brats and German Pretzel Dogs.