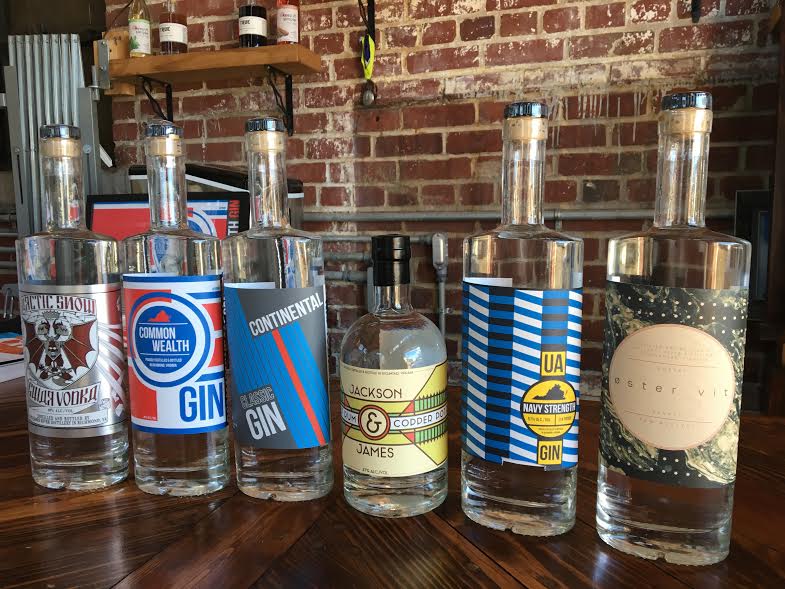 With a commitment to Virginia agriculture, crafting unique recipes, and a growing line of spirits, James River Distillery is quickly carving out a niche for themselves in Richmond’s craft beer-dominated market.

With a commitment to Virginia agriculture, crafting unique recipes, and a growing line of spirits, James River Distillery is quickly carving out a niche for themselves in Richmond’s craft beer-dominated market.

The craft distillery moved into the building at 2700 Hardy St. in October of 2013 and has been churning out gin as well as a few other spirits ever since.

Starting out small, James River Distillery introduced their flagship spirit, Commonwealth Gin, to the market in August of 2014. An 80 proof, Western style gin, The Commonwealth includes with 10 different botanicals, fresh cantaloupe, and Cascade and Amarillo hops and the distillery didn’t stop there. 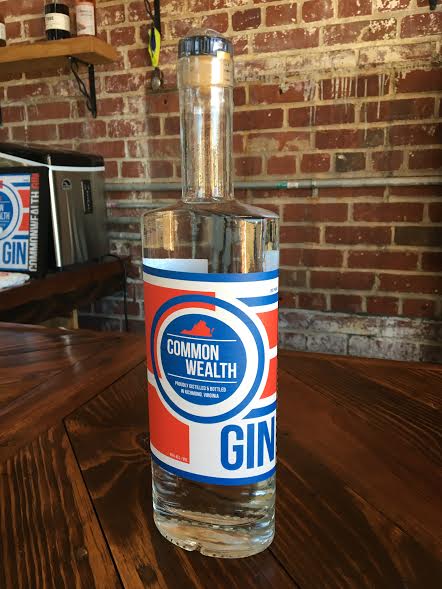 “We’ve been releasing a product every few months since,” said Dwight Chew, Head Distiller. “We just try to do new and interesting things as we move along.”

Since the introduction of the Commonwealth Gin, James River Distillery has expanded with five other products including the Continental Gin, UA Navy Strength Gin, Jackson and James Rum, Oster Vit (an aquavit) and GWAR’s Vodka, Arctic Snow.

Four of the distillery’s spirits are made with Virginia, non-GMO organic corn and organic malted barley grown in Tappahannock, which was crucial for Chew when crafting his recipes.

“We try to source as many of our raw ingredients from Virginia as we possibly could,” he said. “I used to be in the organic farming industry and I wanted to support that.”

Chew is no stranger to the agriculture industry, which is why he wanted to incorporate organic ingredients into his spirits.

Originally from Maryland, the distiller worked on an organic farm in California which eventually led to a fascination with fermentation.

“That’s how I got into microbiology,” Chew said. 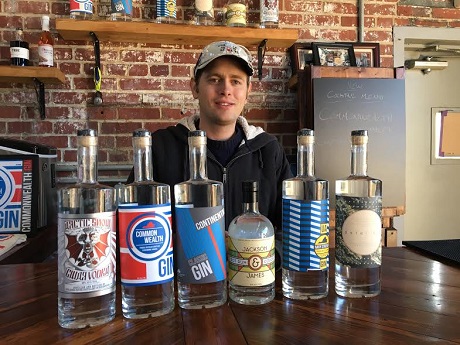 A homebrewer since 2009, Chew eventually was able to land a job in production for over a year at Flying Dog Brewery which is how he met James River Distillery’s owner, Jonathan Staples.

Staples, a Richmond native, moved to Frederick, Maryland with initial plans to open a distillery there according to Chew.

“That’s how I got hooked up with him,” he said. “But he got a call from his parents one day, who are still living here, they heard this distillery was going for auction, it was previously a vodka distillery that went out of business.”

The distillery, Cirrus Vodka, was a potato vodka brand which opened in what is now James River Distillery in 2004. But they announced bankruptcy in 2013 and The 2,000 square foot property and equipment were sold to Staples on June 25 of that year for a little under $400 K. 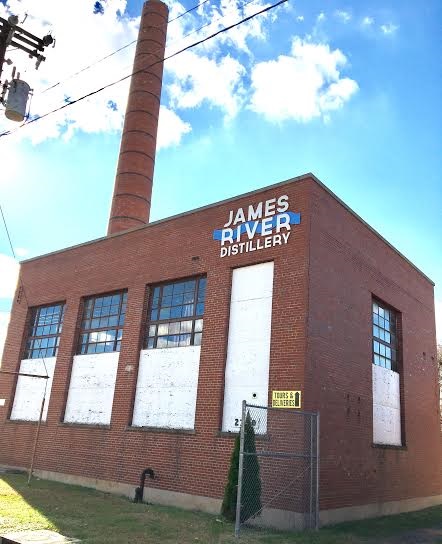 “Rather than moving all the equipment up to Maryland it was easier to pick up here,” Chew added.

Cirrus has since moved and reopened at 1603 Ownby Ln., and has plans to open up a tasting room soon. You can read more on Richmond BizSense’s story here.

Chew moved to Richmond in October 2013 and started setting up the equipment to open the distillery. Besides Chew at the helm as head distiller and Staples as owner, Kristi Croxton, (wife of Travis Croxton who runs Rappahannock Restaurant) serves as managing partner along with Matt Brophy and one other part-time distiller.

All of James River Distillery’s spirits are made using Verdome stills and are milled, cooked, fermented, bottled, and labeled by hand.

“We’re one of the few distillers, we literally do every step of the process ourselves,” Chew said.

The operation uses a 500-gallon cooker where the ingredients begin, which are then put into a 1,000-gallon fermenter, followed by distillation in a 500 gallon stainless steel pot still, 100 gallon copper Vendome spirit still, and finally, in a 20 gallon rectification column. 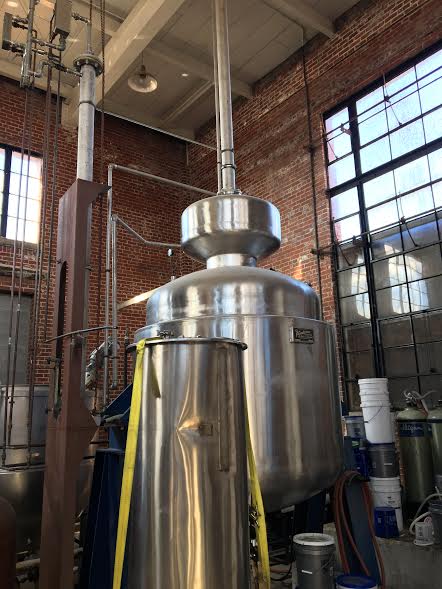 “Our three gins, our aquavit and our vodka we still at least four times,” he said. “The more times you distill something, the cleaner it gets and the more impurities you’re able to strip out from it.”

At minimum, the process usually takes two weeks for the mash, fermentation and each distillation run and depending on the spirit, Chew said anywhere from eight to 16 cases can be made per batch.

After the gins and aquavit are distilled, the spirits are then finished using either a steeping or vapor infusion method.

Chew said the steeping method is used to make the Continental Gin and their Oster Vit.

“You take the corn neutral spirit that we just made and then we take our botanicals that we’re going to flavor our spirit with and steep the botanicals in the spirit for a length of time,” Chew said. “We’re basically making alcohol tea and then we distill it one more time.” 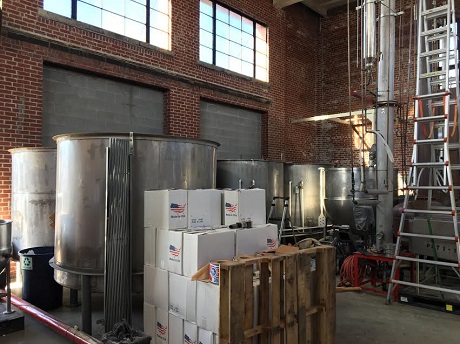 The other method, Vapor infusion, is used to make The Commonwealth Gin and the UA Navy Strength Gin.

After one of those two methods, the spirit is transferred over to their bottling line where it is filled, capped, sealed and labeled by hand and ready for distribution. Currently, the distillery distributes to Virginia, DC, and Maryland. 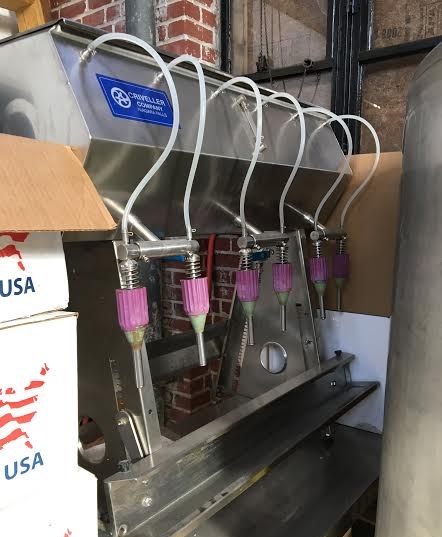 The distillery sells 750ml bottles of their six spirits that range from $30-$40. The brewery has a small bar area for tastings which was built last year, pouring half ounce samples of each spirit, mini cocktails of each or one full size cocktail.

Each of the six products incorporate juniper berries to make it a gin, and Chew adds different botanicals for the spirit’s flavor profile.

“All the recipes are very different,” he said.

March of 2015, James River Distillery introduced their 94 proof Continental Gin to the market, a classic, London dry style with a blend of 10 botanicals including lime peel, coriander, black pepper and of course, juniper. 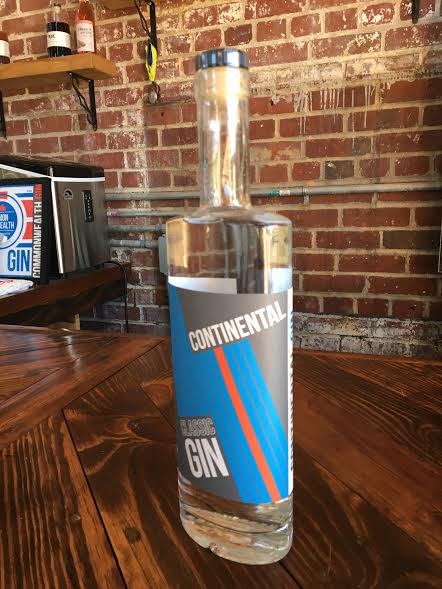 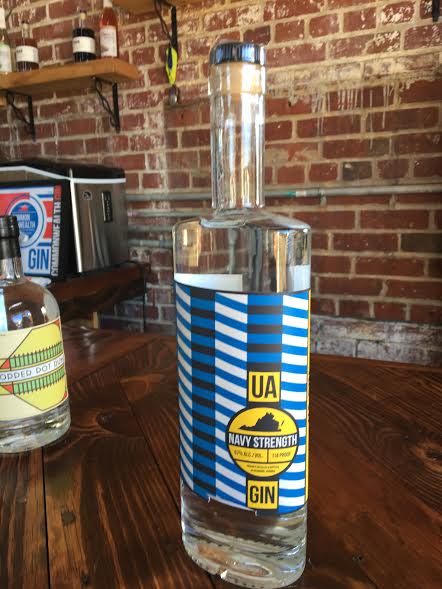 This one has a bit of unique history behind it involving the British Royal Navy in the 1800s.

“114 proof is the lowest proof which you mix a spirit and gun power and the gun power will still ignite,” said Chew. “It way a way for the sailors to check and make sure the captain wasn’t watering down their daily rations.”

The distillery partnered with Rappahannock Restaurant in the fall of 2015 to make their Oster Vit, an aquavit, a traditional Scandinavian spirit meaning “water of life.”

“We use their oyster shells in that,” Chew said. “Kristi {Croxton} did an oyster shooter at a bar that had aqua vit and it was the first time she had aqua vit before and she just thought the oyster aquavit combination was perfect.”

Chew said this pairs particularly well with a bloody mary. They usually pair it with Texas Beach Bloody Mary mix when they serve it at the distillery.

At the beginning of this year, James River Distillery dove into their second collaboration, this time with The Rogue Gentlemen and Saison, to make a 94 proof copper pot rum, “Jackson and James.” 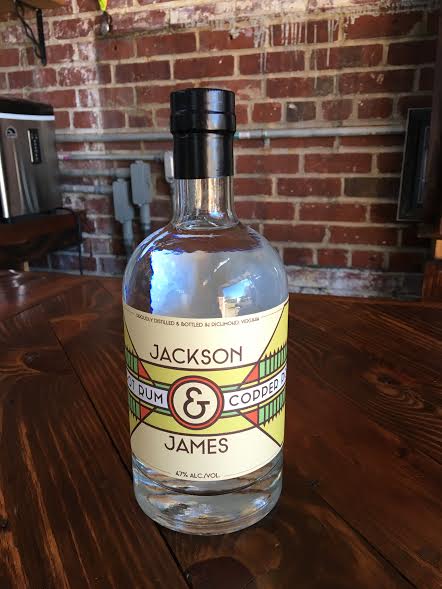 “They were early supporters of ours, they started off using the Commonwealth and Continental and really excited about the idea of doing the rum,” he said. “We got the wrought iron on the label, Jackson Ward is nationally known for its wrought iron,” he said.

Their most recent product is GWAR’s 80 proof potato vodka, Arctic Snow, which was released in August. 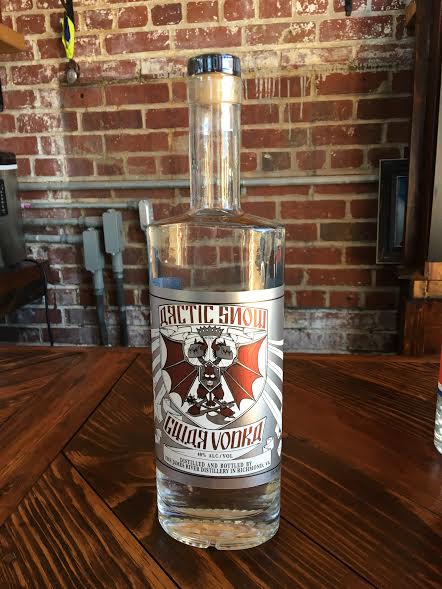 All of these unique recipes, their commitment to sourcing local, and their style is what Chew believes sets them apart from fellow distilleries.

“We were the first distillery in Virginia to do a Navy Strength, we’re the only ones in the world incorporating oysters into the aquavit, putting hops into a gin,” he said. “Our commitment to different ingredients, the way we work with bartenders in the community…”

Even though they’ve fine-tuned their recipes, Chew said they still have a few things up their sleeve for the future.

“We are hoping to pick up the adjacent lot and get some barrel aging going,” he said. “I would love to barrel age our rum and maybe one of our gins as well.”

Staples, the owner, also recently started a hop farm called Black Hops Farm in Leesburg last year and this year marked his first harvest. Chew said he plans to use the hops grown on his farm in some of his future recipes.

Stop by James River Distillery for a tasting or tour Monday through Friday 12-5PM or Saturday 1 PM-4PM.