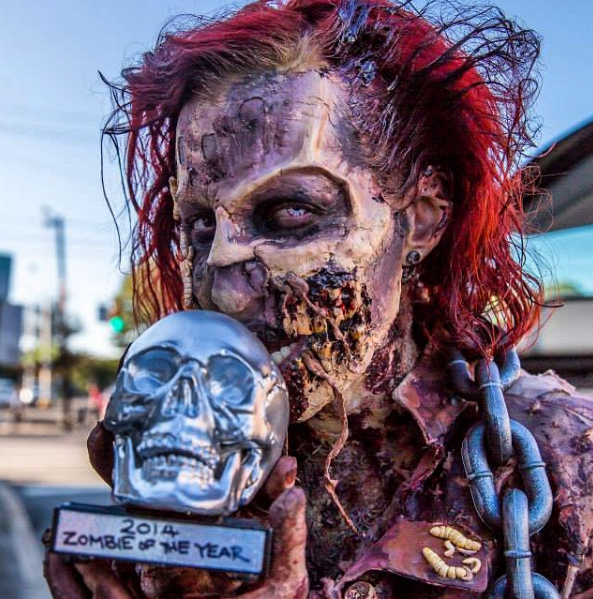 If you’re as excited for Halloween as we are, get ready to whip out the fake blood and your best Walking Dead impressions because a Richmond favorite zombie-themed event is back!

If you’re as excited for Halloween as we are, get ready to whip out the fake blood and your best Walking Dead impressions because a Richmond favorite zombie-themed event is back! The Richmond Zombie Walk will be welcoming all you frightful fools to take a stroll down Carytown for the twelfth time, since it began in 2004.

Anthony Meñez, co-organizer of the annual Zombie Walk, can’t believe it has been 12 years of creepy fun.

“It feels like we just started doing this a couple of years ago,” said Meñez. “I still can’t wrap my head around it that people still come out to Carytown and participate. The fact that it has become this annual tradition that people look forward to is still kinda new to me.”

Meñez worked with Roger Barr, owner of www.i-mockery.com , who organized the very first Richmond Zombie Walk. You can find almost anything on i-mockery.com from entertainment, humor, to nostalgia. It also serves as a one stop shop for all things Halloween.

We're coming for you Richmond! Join the zombie horde or come see the carnage in Carytown on Saturday, October 25th! #greymatter #richmondzombiewalk #deadmason

“Barr saw a Zombie Walk in toronto and thought that Richmond really needed to do something like that,” Meñez said. “So he bought the domain zombiewalk.com and set it up like a forum for people to set up their own Zombie Walks in their own cities and towns.”

The very first Richmond Zombie Walk was organized like a flash mob, according to Meñez, and was held at Short Pump Mall. Sadly the police quickly showed up and shut it down, making the jump to the more understanding Carytown a reasonable choice.

“At first I’m sure some of the shop owners were hesitant, but it’s turned out to be really great,” said Meñez who stressed how fortunate he and his friends were to get away with shuffling through RVA’s busiest local shopping district un-harmed. “We bring in a lot of foot traffic that day, and half of our attendants are just spectators so it seems like it could be good for businesses. We haven’t heard any negative comments from any shop owners there, but we do make a point to not leave a bloody trail behind us, which is part of the rules we implement: to not touch anyone or anything.”

Since beginning in 2004, the Richmond Zombie Walk has welcomed hundreds of zombies joining the walk.

“It’s definitely grown a deal since the beginning,” said Meñez. “And we still see a slight increase year after year.”

Having gaining so many participants over the years, Meñez, along with co-organizer Josh Bishop, decided to collect donations to benefit the American Cancer Society in 2007.

“At the time my father in-law was suffering from lung cancer and he actually passed away that year, so that is why the American Cancer Society was on the top of my mind,” said Meñez. “We just ask for 5 dollars from each zombie so that we end up with a decent amount to donate and it’s optional. It’s never really been our main focus but it is great to be able to turn this event into something good.”

Meñez shared with RVA Mag that he is still not used to the fact that he has organized a family-friendly event. According to Meñez, the crowd that took part in the first few years were mainly VCU students and college aged kids, but over the years they attracted more and more families.

The Richmond Zombie Walk has a pre-walk/staging area, just before the actual walk, where the zombies gather and prepare for the walk through Carytown. There’s also a costume contest which Meñez hopes will lead to folks upping their Zombie game.

The categories for the contest include: Most Disgusting, Best Couple/Group Theme, Best Pop Culture Theme (TV/Movie/Comic/Gaming), Best Zombie Kid, and, 2016 Zombie of the Year (Best Overall). Rest In Pieces, Richmond’s local oddity shop, will be donating specimens for prizes for the costume contest.

“Last year we got a brain in a jar, which was great, and I’m hoping we get another brain this year,” said Meñez.

#Repost @riprichmond ・・・ Huge cow brain available in-store now! You can also win one of these by participating in the @richmondzombiewalk on the 29th! Open 11-7 today!

Every year local illustrator Abigail Larson creates posters for the Richmond Zombie Walk that can be purchased before and after the walk. Much like the money collected from participants, proceeds from poster sales also go to the American Cancer Society.

Meñez, Bishop, and Larson will also be attending RED VEIN Haunted House October 22nd, selling posters and promoting the walk with other vendors as part of “Keep RVA Weird Night.”

The 12th Annual Richmond Zombie Walk happens Saturday October 29th. Pre-walk meet up/staging area location at 1pm will be held at Boat Lake at Byrd Park (on Boat Lake Drive) and the actual walk will begin on the sidewalk in front of the old Dixie Donuts location (2901 W Cary St, Richmond, VA 23221) in Carytown immediately after at about 2:30pm.

After the walk head over to Citizen Burger Bar Carytown and Don’t Look Back who have paired up with the Richmond Zombie walk and will be hosting an UN-Happy Hour with Zombie Specials and HALLOWEEK 2016 Beer Tapping from 4-8pm.

For rules and other info about the walk head to their site www.richmondzombiewalk.com and keep up with all the weird that’s going on in Richmond for #Halloweek2016 hosted by RVA Mag.