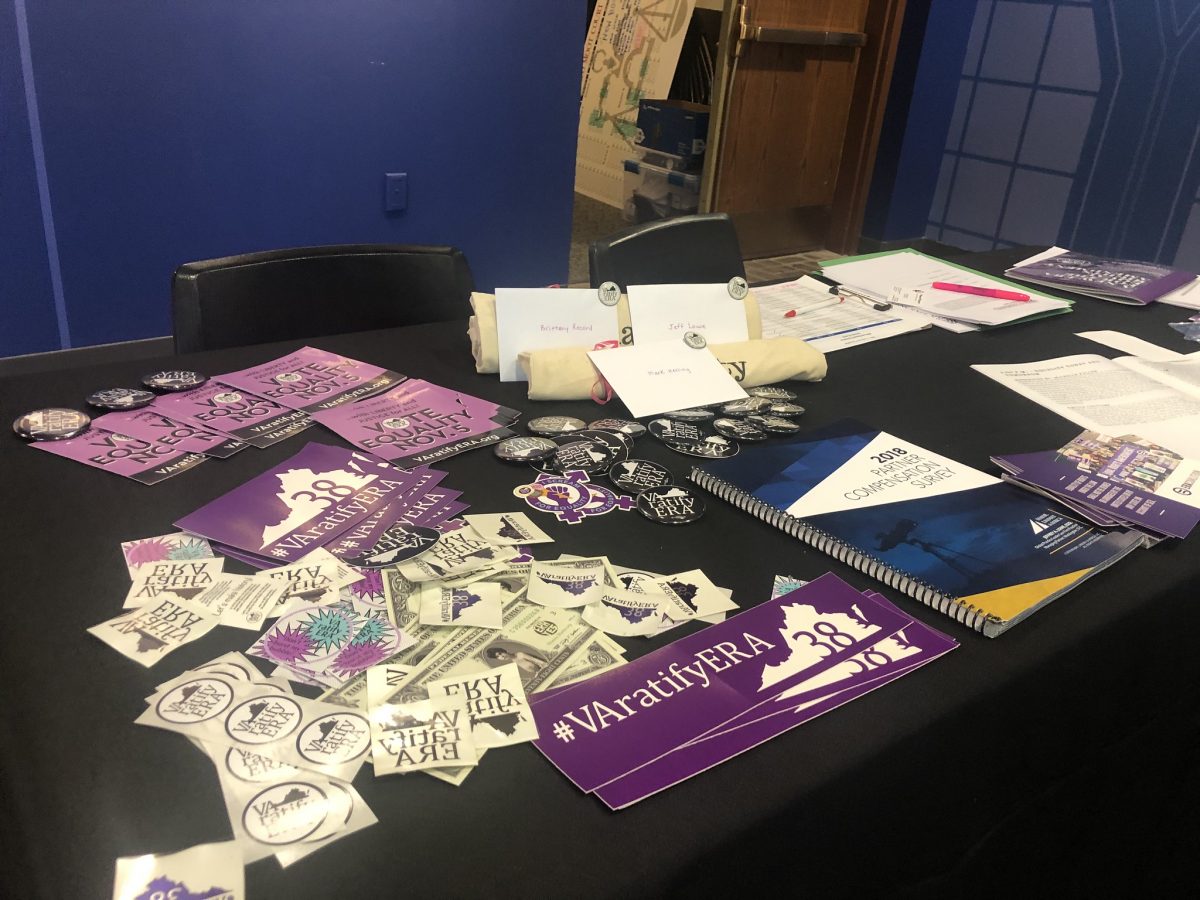 With a new Democratic majority in the General Assembly, Virginia could become the 38th state to ratify the ERA. Generation Z, people of color, and the LGBTQ community are leading a new generation in the decades-long fight to add the amendment to the U.S. Constitution.

University of Virginia student Emilia Couture had no idea what the Equal Rights Amendment was before her sister told her about the amendment a few years back.

Now as the outreach director of Generation Ratify, a youth-led movement created to ratify the ERA, Couture and many others are leading a new generation in the decades-long fight to add the amendment to the U.S. Constitution.

“It’s time to change the face of the movement by including the next generation — the youth,” Generation Ratify said on its website.

The ERA seeks to guarantee equal rights in the U.S. Constitution regardless of sex. The amendment was introduced in Congress in 1923, roughly three years after the 19th Amendment gave women the right to vote. It took Congress nearly five decades to pass the amendment, which still needed to be approved by 38 states. Two deadlines passed without the required approval. By the 1980s, 35 states had ratified the amendment, but it wasn’t until recent years that the movement gained more momentum. Nevada and Illinois ratified the ERA in 2017 and 2018, respectively. With a new Democratic majority in the General Assembly, Virginia could become the 38th state to ratify the ERA.

Despite being born nearly two decades after the ERA’s last ratification deadline in 1982, Couture believes young people are aware of intersectionality, and want to implement inclusivity in the ERA.

According to Generation Ratify, gender equality is an intersectionality issue, which means that when social categorizations like race and gender combine, members of more than one minority group experience other disadvantages than just gender inequality.

“I think for a long time, the ERA movement has largely been a white women’s movement, and it’s really problematic that it has been,” Couture said.

The amendment has diverse support in the state legislature, including men. According to a 2016 poll conducted by the ERA Coalition, the ERA is supported by a majority of men and women. Sen. Glen Sturtevant, R-Richmond, sponsored ERA legislation in 2019, and Sen. Scott Surovell, D-Fairfax, introduced bills in the past two years to ratify the amendment.

Sen. Jennifer McClellan, D-Richmond, said African American women and women of color were overlooked in the building of the ERA and women’s rights, but now these women are leading the push for the ERA.

Sen. Pat Spearman, D-North Las Vegas, an openly lesbian, African American woman, led the fight in Nevada to ratify the ERA. Spearman served as the chief sponsor of the 2017 resolution to ratify the ERA in the Nevada Legislature, approved that year.

“It is a symbol of the fact that we are becoming a more perfected union and we understand that equality matters,” Spearman said.

Virginia legislators have made multiple attempts to ratify the ERA. This year, Senate Joint Resolution 284 to ratify the ERA passed the Senate, but never made it out of a House subcommittee. Four Republicans voted against the resolution in a subcommittee, while two Democrats voted for it. During the vote, Del. Margaret Ransone, R-Westmoreland, said she voted against the resolution because she doesn’t need words on a piece of paper representing women’s equality because “God made us all equal.”

Del. Hala Ayala, D-Prince William, one of two Latinas elected to the General Assembly in 2017, said in a recent interview with Capital News Service that she doesn’t understand why some members of the Republican party would “argue the moral obligation that we have to not only look towards our constituents, who overwhelmingly supported this, but also women, who wanted their voices to be heard.”

Democrats then filed motions for rule changes that would have the amendment heard on the House floor and give delegates a chance to vote on it, but the motions failed.

Several members of the Virginia Legislative Black Caucus are leading the push to ratify the ERA in the upcoming General Assembly session. Ayala is chief co-patron on House Joint Resolution 1, sponsored by Del. Jennifer Carroll Foy, D- Prince William. McClellan and Sen. Mamie Locke, D-Hampton, are chief patrons of Senate Joint Resolution 1, which seeks to ratify the amendment in the Senate.

Carroll Foy said that she believes that the ERA has a far-reaching impact on women of color than other marginalized groups due to inequality in pay.

“As an African American woman, I am paid approximately 60 cents to a man’s dollar,” Carroll Foy said.

While the ERA does not explicitly talk about equal pay for women, Carroll Foy said she believes that adding the amendment to the Constitution would be the anchor when it comes to passing equal pay legislation.

However, not all women advocate for the amendment’s passage. Anne Schlafly Cori, chairman of the Eagle Forum, an advocacy organization for conservative values, said the ERA would harm women.

Schlafly Cori’s mother, Phyllis Schlafly, founded the Eagle Forum. During the 1970s, Schlafly was a strong opponent of the ERA. For the new generation, Schlafly Cori said she believes that the ERA, if ratified, would give constitutional rights to what she called “a group of people who didn’t exist in the 1970s,” transgender people.

The amendment bans sex-based discrimination; however, it does not specify what sex is. According to the National Institutes of Health, sex refers to the biological differences between females and males, while gender identity refers to a person’s internal sense of gender. Del. Danica Roem, D-Prince William, a co-patron of HJ1, said people think LGBTQ people are “subverting social norms” when it comes to gender and sex.

“Discrimination in regards to sexual orientation, gender identity, and gender expression are all inherently discrimination on accounts of sex,” said Roem.

Del. Mark Cole, R-Fredericksburg, believes the ERA will be ratified in 2020. However, Cole said that ratifying the amendment will lead to a series of “costly and divisive lawsuits.” Since the ERA’s last ratification deadline passed in 1982, the amendment is considered expired, according to Cole. He also notes that five states rescinded their ratifications.

“Regardless of who wins these lawsuits, a large portion of the country will consider the Constitution to be tainted,” Cole said in a statement on his website posted in January. “Either with an amendment that is not valid or because an amendment that should be included was not.”

During the 2019 General Assembly session, Cole  proposed HJ 692, which would have Congress  re-submit the amendment with “language that addresses the concerns that caused the old ERA to fail,” but it died in committee. ERA Advocates, however, said they believe that the original amendment can still be ratified. Supporters have cited U.S. Supreme Court cases like Coleman v. Miller, where the Supreme Court decided that it’s up to Congress to decide an amendment’s ratification period.

Generation Ratify wants to remove the ERA’s ratification deadline. In November, the organization wrote to members of Congress to support resolutions which would remove the amendment’s deadline from the ratification process.

It’s unclear what Congress will do if the ERA is ratified by 38 states or what impact the amendment will have if it makes it into the Constitution, but many state Democrats are determined to approve the amendment. McClellan and other Virginia Democrats said they feel confident that the ERA will pass in the upcoming General Assembly session.

“To do it in the 100th anniversary of the 19th Amendment, I think it is very appropriate,” McClellan said. “While it’s long overdue, I think getting it done in 2020 is a little bit of poetic justice.”