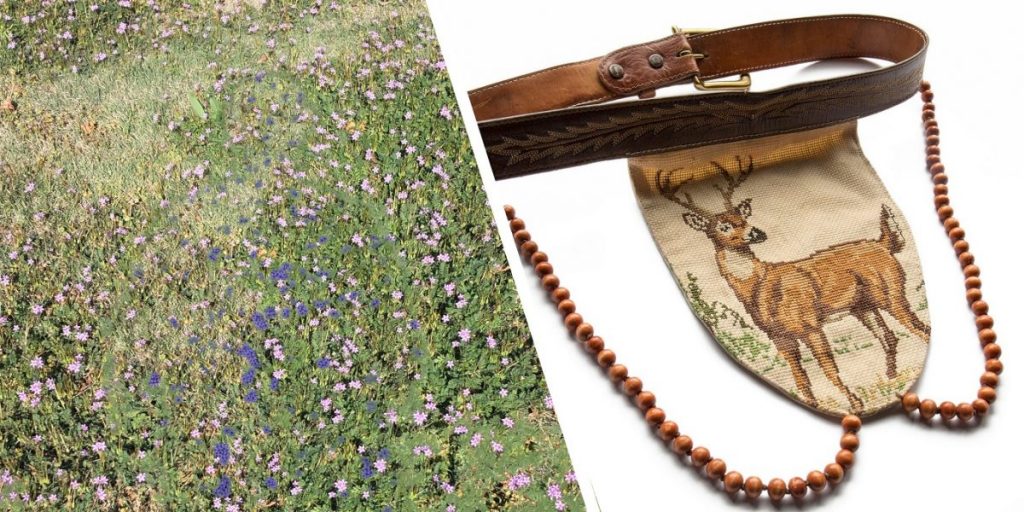 Lovers of shiny things and psychedelic imagery, you’re in luck. When Diversity Richmond reopened, so did the Iridian Gallery – just in time to present Everett Hoffman’s Dazzling and Tremendous and Nick Simko’s Queer Dimensionalities.

In the past, the Iridian Gallery has shown multiple artists’ work as one show under an overarching theme. This two-show approach is meant to give more agency to the artists. At six feet apart, viewers can enjoy two separately spectacular shows (and search for hidden similarities, too).

One of the great things about art galleries, Iridian Co-Chair Michael-Birch Pierce will tell you, is there’s no right way to experience them. “There’s nothing specific anyone’s supposed to get out of any art show. I think that there’s a lot of power given to the viewer in art,” they said.

With that in mind, know this: Hoffman and Simko, who both hail from rural America, make work that penetrates normative structures associated with queerness. Simko focuses on photography, Hoffman on craft. At the show, you can expect to find bedazzled steel jockstrap cups that light up from behind and manipulated cell phone photos that defy the laws of gravity and time itself. That’s a pretty good reason to get out of the house for a while.

Hoffman resides in Richmond, but grew up in conservative rural Idaho, where he played little league baseball and watched his grandmother quilt. These experiences would later influence his choice of materials and subject matter.

His artist statement reads, “My work reimagines the function of ornamentation and its relationship to the body. I approach new materials and found objects with the eye of a jeweler, highlighting and exploiting the subtle, and often invisible, links between material histories and their connection to identity.”

While it might help, you don’t have to know the history behind Hoffman’s work to feel its impact. His materials are familiar, like that old dusty chair in the corner of your grandma’s house, and certainly aren’t anything you’d expect to see re-imagined as a jockstrap. The masculine collides with the feminine, or on the contrary, the outside goes on the inside. Rough upholstery sitting against skin, symbolizing how our environment has an intimate role in shaping who we become.

Antiquing is a favorite pastime of Hoffman’s. He gravitates towards needlepoint while browsing, because, he explained, “Needlepoints are on everything from purses to chairs to wall dividers. And a lot of them have a narrative quality to them.”

If you look at the careful quality of Hoffman’s handiwork, it’s clear he has as much love for the original creation as he does for the new one he’s making out of it. “I’m interested in how I can enter into a dialogue with the person who made that needlepoint, or made that cross stitch, in creating something new.”

There’s something inherently tongue-in-cheek about Hoffman’s work. If you laugh, that’s okay. Whatever your reaction, he’s here for it. “For me, I think the work that interests me as an artist is the work that sticks with me afterwards,” he said, recalling a chair made out of woven belts by artist Hector Garcia. “Every time I see a woven belt I think of that chair that he made. And I kind of hope that my work does something similar.”

Up until recently, Simko’s work has been mostly figurative, but when he started going for walks around his neighborhood in Kansas, that changed. To be honest, given the delightful variety of Simko’s work, it’s not surprising he’d explore a new direction.

“Queer Dimensionalities explores the possibilities of what it might look like if I took a chance to author myself in the terms of my own deeply personal vision,” reads his artist statement. It continues, “Departing from figurative representation, this project considers how queerness might be represented in textural, spatial, and atmospheric ways.”

Queerness is more complicated than most over-simplifying media representations make it out to be. “And so I was like, ‘How would I visually approximate that feeling?'” Simko said. “It’s a really complicated feeling!”

The answer didn’t come to him instantaneously. Instead, it snuck up on him in between projects, in the space he had dedicated to himself. Simko took thousands of cell phone images of grass, concrete, and his own shadow. When he started to manipulate the images in Photoshop, he was pleased to discover how they might be transformed. The process, he described, was more like working “with” the computer than telling it what to do.

“They’re not images of me, they’re images of my shadow. I’m there, but I’m not there, and I’m also an instrument in my own illegibility,” Simko said. After a brief detour on the illegibility of ancient Greek poetry, he concluded that the images weren’t exactly self-portraits.

Instead of presenting the viewer with an obvious subject, Simko’s images invite them to tumble through the rabbit hole of glittery, grassy gook. They’re more intangible essence than they are a thing, and I believe that’s the point.

“Photographs, especially straight photographs, have the privilege of being something you look through, as opposed to looking at,” said Simko. “It’s more of a systematic way of looking that I’m pushing up against, as opposed to any one subject.”

For pandemic-related safety, Iridian is allowing five viewers into the gallery at a time and offers hand sanitizer to those who enter. Opening night last Friday was a minimal affair, without the wine and cheese, but judging by the gallery’s Instagram story, still very spirited.

Pierce made sure of it. “It’s such an important part of being an artist, when you’re baring your soul out there with a new solo exhibition, that I couldn’t imagine depriving the artists of that opportunity,” they said.

Thirty percent of the proceeds from Everett Hoffman’s work will be donated to the Black School, an experimental art school teaching radical Black history.

You can stop by Wednesday through Sunday from 9am to 5pm until September 15. Do it!

Paxton claims (falsely) that the policies "put women and children at risk," relying on the tired anti-LGBTQ accusations that queer and... READ MORE

Paxton claims (falsely) that the policies "put women and children at risk," relying on the tired anti-LGBTQ accusations that queer and... READ MORE