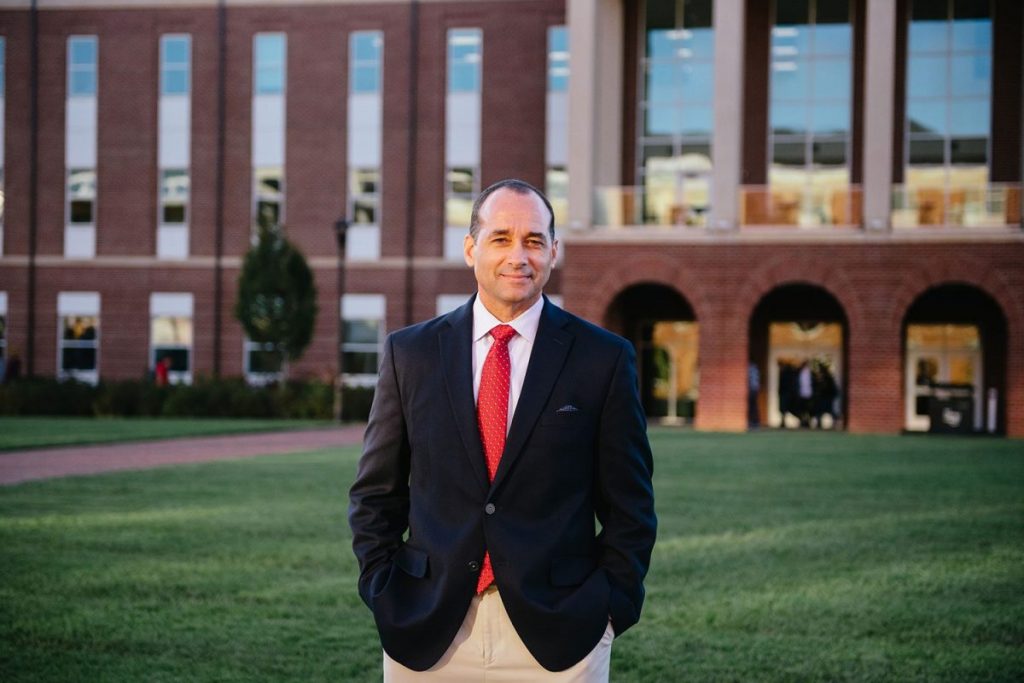 Bob Good, who successfully wrested the Republican nomination for Virginia’s Fifth Congressional District seat away from incumbent Denver Riggleman, is using fears of “a man dressed as a woman” in his campaign literature.

We haven’t checked in on the Republican Party of Virginia’s 5th Congressional District since last year, when the coalition that had sent Denver Riggleman to Congress in 2018 was, only a year later, publicly tearing itself apart in heated fashion due to the fact that Riggleman had officiated a same-sex wedding between two of his former campaign staffers. Since then, things have only gotten more heated and dramatic, culminating earlier this summer with a party convention that chose to nominate Campbell County Board of Supervisors member Bob Good to run on the Republican ticket in November instead of Riggleman.

Riggleman has recovered well — he’s remained active in Congress despite suddenly finding himself a lame-duck Representative, and is now apparently mulling a third-party run for Governor in 2021. Meanwhile, Virginia’s Fifth District has found itself with a choice on its hands that is far different from the one it faced in 2018. And with Bob Good on the Republican ticket, it’s a significantly more controversial one as well.

You see, until January of this year, Bob Good was Director of Athletics at Liberty University. And now that you know that, it may not surprise you very much to learn that Good has an extremely negative attitude toward the LGBTQ community. Even before he’d announced his intention to run against Riggleman for the Republican nomination in the Fifth District, he condemned Riggleman’s having officiated a gay wedding on his Facebook page. In one comment, he said that “supporting gay rights” meant that “Denver Riggleman does not represent the values of conservative Republicans in the 5th District.” In another, he said, “You can’t flaunt your apparently progressive/liberal values in front of the conservative Republican base in the district and expect to not catch any flack for it.”

After Good officially declared his campaign for Riggleman’s Congressional seat, he said at a February campaign event, “I have a biblical view of marriage, very different from the congressman’s view on that.” Meanwhile, on Good’s website, he republished a letter from 11 Fifth District voters, originally sent to the Bedford Bulletin, in which they characterize homosexuality as a mental illness. “Homosexuality is a very complex subject that medical science has confirmed is psychological moreso than genetic,” they write, in the midst of arguing in favor of voting Good into Congress.

Now, with a recent campaign mailing inviting clergy members to meet with Good about the importance of “religious freedom” — a loaded phrase, to say the least, where LGBTQ rights are concerned — Good has used the existence of transgender people, and specifically trans women, as an opportunity for fear-mongering.

“What happens when a male member of your congregation goes on vacation and returns four weeks later as a female?” the invitation read. “What do your church bylaws state regarding a man dressed as a woman who attends a church function and expects to use the women’s restroom?” Though the email using this language wasn’t signed by Good, it was sent by the Good campaign’s “Faith Coalition leader,” Travis Witt. The subject line read in part, “When a man becomes a woman.”

The invitation also used the spectre of the Virginia Values Act, passed by the General Assembly and signed into law by Governor Ralph Northam earlier this year, as a bugbear. In the mailer, Good’s campaign claims that the Virginia Values Act — which prohibits discrimination in housing, employment, and public accomodation to anyone on the basis of sexual orientation or gender identity — infringes upon… yup, you guessed it: religious freedom.

“Bob Good, candidate for Congress, is interested in preserving religious liberties as defined in the First Amendment of the U.S. Constitution,” Witt’s invitation to Fifth District clergy read. “He is extremely concerned about the recent changes that now affect both large and small churches.”

This move from a relatively moderate Republican who supported LGBTQ rights to a candidate who’s centered his campaign on attacking our rights has, in the minds of many Democrats, put the Fifth District into play in November. From being a state that went Republican in presidential elections for over 40 years straight, Virginia has transformed significantly in recent years. As of now, only four of Virginia’s 13 legislators in Congress are Republican. On the state level, Democrats hold both the governor’s mansion and both houses of the General Assembly — something that, at the time of the 2019 election, hadn’t been true in over two decades. For Democrats to take one of those four remaining Republican Congressional districts would be a huge coup. And it’s one Fifth District Democrats hope to achieve with their current candidate, Cameron Webb.

Webb, a doctor who teaches at the University of Virginia, would become the first Black physician to serve in Congress if elected in November. Political experts still see the district as leaning Republican, but polling shows Webb as close as two points away from Good, and between the possibility that Webb will draw a higher Black turnout in the election and Good’s choice to focus on opposition to LGBTQ rights, Democrats hope they can close that gap completely.

“We’re in the middle of a pandemic that has infected over 100,000 Virginians and a recession that has put millions across the country out of work, but all Bob Good wants to focus on is same-sex marriages,” Grant Fox, a Virginia Democratic Party spokesman, told the New York Times. “Virginians need help, and Bob Good is spending his time convening church officials to figure out how to best discriminate against the LGBTQ community.”

The Human Rights Campaign has also rallied around Webb, and condemned Good’s discriminatory positions. “The 1.3 million Equality Voters across Virginia have no patience for this type of divisiveness and hate,” said HRC president Alphonso David in a statement. “Bob Good might have been able to win a low-turnout party caucus by attacking LGBTQ people, but Virginia voters showed in 2018 and 2019 that attacking LGBTQ people is no winning strategy. Transphobia and anti-LGBTQ attacks are unacceptable. We need leaders like Dr. Cameron Webb in Congress who will bring us together and expand opportunity and rights for everyone, not amplify hate and division.”

Will the Fifth District’s Republican Party allow far-right intractability over LGBTQ rights to derail their ability to maintain representation in a county that ostensibly leans Republican? Or is this going to be one of those times that we find out we share a state with people whose intolerance runs deeper than we ever expected? We’ll learn in less than three months; in the meantime, Cameron Webb’s campaign could sure use your help.

In his new solo show at Reynolds Gallery, sculptor Raul De Lara takes a playful approach to images of his homeland in Mexico -- a place... READ MORE

A Safer Place For Recovery

For LGBTQ and BIPOC folks seeking recovery from addiction in the Richmond area, there have traditionally not been many good options.... READ MORE

Dept. Of Education Threatens To Withhold $18 Million From...

Betsy DeVos's reasoning is based on prejudicial misunderstandings and bears a strong resemblance to a current lawsuit against Connecticut... READ MORE

In his new solo show at Reynolds Gallery, sculptor Raul De Lara takes a playful approach to images of his homeland in Mexico -- a place... READ MORE

A Safer Place For Recovery

For LGBTQ and BIPOC folks seeking recovery from addiction in the Richmond area, there have traditionally not been many good options.... READ MORE

Dept. Of Education Threatens To Withhold $18 Million From...

Betsy DeVos's reasoning is based on prejudicial misunderstandings and bears a strong resemblance to a current lawsuit against Connecticut... READ MORE