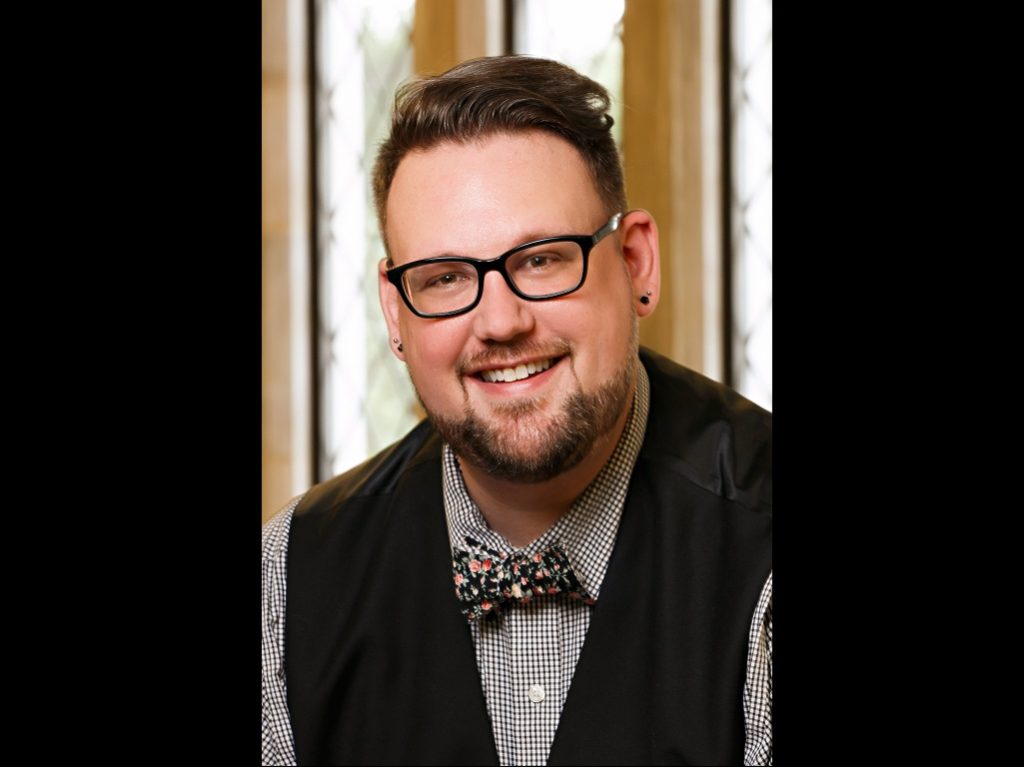 Our 2019 Fall Pride Guide, in collaboration with VA Pride, is out now! In this article from the magazine, we learn more about this year’s VA Pride Firework honoree, Side By Side Executive Director Ted Lewis.

You might know this year’s VA Pride Firework Award honoree, Ted Lewis, from their work as Executive Director for Side By Side: Richmond’s long-running center for Virginia’s LGBTQ youth. You might know them from their work establishing the LGBTQ Campus Life program at the University of Richmond, or for their locally-focused activism on a variety of issues at the intersection of race, gender, and identity.

But for Lewis, their connection to advocacy goes back much further than that, all the way to their childhood. “I grew up in a family where we talked about identity, politics, race, and difference on a daily basis at the dinner table,” they said. “It definitely informed my activism and my understanding of the world.”

Coming from a multiracial family — Lewis’s stepfather, who raised them, is African-American — made a huge difference in how they grew up. But their discovery of the field of women’s and gender studies in college was just as important.

“I identify as non-binary and genderqueer, and didn’t really learn about those terms until I started studying feminist and womanist scholars,” said Lewis, who uses they/them pronouns. “I finally felt like there was language to define what I was, that I had never known existed until I was in college.”

Lewis arrived in Richmond in 2012, when they accepted a position as University of Richmond’s Associate Director for LGBTQ Campus Life — a position they were the first person to hold. But this wasn’t their first time inaugurating an LGBTQ-specific role at a university. “I came to UR from UNC-Charlotte, where I was the first Assistant Director For Sexual/Gender Diversity,” they said. “So I had experience being the first person to hold a position.”

And fortunately, they found a strong LGBTQ community waiting for them when they arrived. “At UR, there was a large number of students, alumni, faculty, staff, and administrators who had already been doing LGBTQ work,” they said. “So really, it was stepping in to help coordinate those efforts and give them a little more support and direction. To be quite honest, at UR it didn’t feel like I was the first, because there had been so much work done over the years prior to me ever stepping foot on campus. While I was in a leadership position, none of the progress that I’ve ever been a part of has been solely because of me. There were tons of people working on this.”

This is the sort of fact that many Richmond residents might be surprised to learn about University of Richmond, which has a long history of holding itself somewhat separate from the city around it. “It has a rather conservative history as an institution,” Lewis agreed. “It was Catholic-affiliated for a long time, and still has a chaplain on campus. So that made it sometimes difficult to push the university to change. On the flipside of that, it was a private institution, so change could move significantly quicker; it’s not as if I had to get approval from the General Assembly or the Governors’ office.”

Lewis is proud of the progress UR has made as an LGBTQ-inclusive campus over the past seven years, both under their own leadership and under that of Lee Dyer, who succeeded Lewis in the position in 2017. “What I was most excited about was, in particular, the way the institution has shifted, and continues to shift,” they said. “Particularly for transgender and non-binary students. UR has a coordinate college system, which means they have a men’s college and a women’s college under the University of Richmond banner. I was there when the first student who started in the women’s college graduated in the men’s college, was able to transition on campus, be accepted, and get a diploma with his chosen name, before it had been legally changed — things that I think a lot of times cisgender students don’t think about, because they never have to navigate.”

They pointed out that, even years after they left, UR still continues to make positive changes, the roots of which trace back to their time at the campus. “The institution as a whole is still trying to get out of the UR bubble, and be more invested and involved in the city,” they said. “So it’s really powerful for me to see that this year, UR is hosting Equality Virginia’s Transgender Information and Empowerment Summit (TIES). Even though that hosting is happening long after I left, it’s astounding to think about how, when I [arrived] in 2012, that [might not] have been able to happen.”

After four years at UR, Lewis accepted the position of Executive Director for Side By Side in 2016 — at a time when the LGBTQ youth support and advocacy organization was still known by its original name, ROSMY. However, the name change was already in the works when Lewis arrived. “My first meeting with board is when they told me they had already selected the new identity, and were asking me to shepherd the change,” Lewis said.

Side By Side has grown in many ways since Lewis’s arrival three years ago. “We have doubled our operating budget; we have more than doubled the staff,” they said. “Last fiscal year, we served nearly 450 unique youth with support groups, so we’re seeing a really tremendous growth.”

However, growth alone was not Lewis’s goal when they arrived at Side By Side; they wanted to make sure that the group’s efforts were as effective as possible. “One of my hopes when I came into the role was to evaluate how we serve LGBTQ youth in our community that are in the most need,” they said. “In order to do that, we needed to start looking intersectionally.”

Under Lewis’s direction, Intersectionality — an approach to social justice that evaluates the ways in which various types of discrimination overlap, and can contribute to greater oppression in certain groups — became a core aspect of Side By Side’s work. “When I started at Side by Side, there was only one staff member who was a person of color,” Lewis said. “Not that the organization had never engaged in race conversations, but I don’t think there was an intention around looking at the needs of youth of color, and specifically black LGBTQ youth.”

This realization led Side By Side to seek out partnerships not only with LGBTQ organizations led by people of color, such as Nationz Foundation, Virginia Anti-Violence Project, and Black Pride, but also with organizations that focused on work in minority communities, but weren’t specifically LGBTQ, including Art 180 and RISE For Youth. “We’ve been intentional about trying to be more intersectional, specifically around race,” said Lewis. “This is Richmond, Virginia, the capital of the Confederacy. This is the South. You can’t, in my opinion, do intersectional work without centering race in that conversation. While other identities are certainly important, race trumps a lot of that in the South.”

Side By Side has also focused on diversity training for various organizations and businesses that work with LGBTQ youth. Beginning the program with local public school districts, they have taken it in a variety of directions, both geographically and demographically. “We’ve been working primarily in schools, not just in Central Virginia — we’re in Stafford County, training their leadership as they’ve been in the news, in particular, with some issues with transgender students,” said Lewis.

They explain that Side By Side has also worked with over 400 mental and behavioral health providers around the state, and have given diversity training programs for corporations like Capital One and Altria, as well as local restaurants and a variety of businesses in the hospitality industry. The training programs are in high demand, said Lewis. “We continue to get more and more requests, everyone from local roller derby teams to the hospital to the county government, on how they can be more inclusive of the community.”

The next step for Side By Side, according to Lewis, is a move toward advocacy for change in policies on local and state levels. Their work was instrumental in getting Richmond Public Schools to adopt an LGBTQ-inclusive student code of responsibility earlier this year, and they hope to leverage that progress into more LGBTQ inclusiveness in schools throughout the state. “Our hope is to work with RPS this school year to develop inclusive policies that can get passed by the school board, that we can take across Virginia to other districts and other counties,” said Lewis, “and try to make schools more accepting.”

At this point, Lewis just hopes they can keep up with the progress they’ve been making. “We’ve been very busy,” they said. “My hope, for both myself and Side by Side, is that we can continue to keep pace with our tremendous growth. We are trying to take some bigger swings, if you will, to affect the lives of more young people, not just the ones that are able to make it into the doors of Side By Side.”

In light of all this, it’s no surprise that VA Pride selected Lewis for this year’s Firework Award. “The award is given to people who are catalysts for change in this community, and we could think of no other person that has done more to change the community for the better, especially for LGBTQ youth,” said VA Pride President James Millner. “Ted is a tremendous role model for so many youths in this community, and we couldn’t be happier that we have the opportunity to recognize them for what they do.”