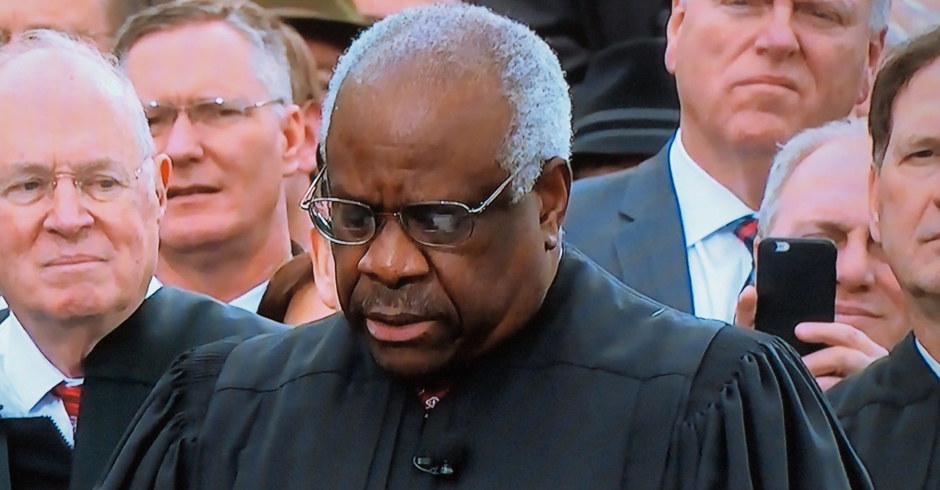 The opinion, co-authored by fellow Supreme Court Justice Samuel Alito, made the argument that marriage equality should never have been allowed, because of (you guessed it) “religious freedom.”

Former Rowan County, Kentucky clerk Kim Davis won’t get a hearing from the U.S. Supreme Court. A case against her, brought by several same-sex couples she refused to grant marriage licenses to, was rejected Monday by the country’s top court.

But ultra-conservative Justice Clarence Thomas took the opportunity to attack the court’s landmark Obergefell case, which found the Constitution allows same-sex couples the same rights and responsibilities of marriage as their different-sex peers.

Thomas, who has a direct line into the White House via his activist and lobbyist wife Ginni Thomas, slammed the decision, suggesting the case should be overturned, as Slate’s Mark Joseph Stern reports.

Thomas claims Kim Davis “may have been one of the first victims of this Court’s cavalier treatment of religion in its Obergefell decision, but she will not be the last.”

His words are scathing, and a direct assault on equality.

“Due to Obergefell, those with sincerely held religious beliefs concerning marriage will find it increasingly difficult to participate in society without running afoul of Obergefell and its effect on other antidiscrimination laws,” claims Thomas, five years after the decision.

“It would be one thing if recognition for same-sex marriage had been debated and adopted through the democratic process, with the people deciding not to provide statutory protections for religious liberty under state law,” he adds. “But it is quite another when the Court forces that choice upon society through its creation of atextual constitutional rights and its ungenerous interpretation of the Free Exercise Clause, leaving those with religious objections in the lurch.”

At the time of the Obergefell decision, same-sex marriage was supported by six out of 10 Americans.

In the 2015 Obergefell case, Justice Thomas writes, “the Court read a right to same-sex marriage into the Fourteenth Amendment, even though that right is found nowhere in the text.”

Thomas is a textualist, or originalist, adhering to conservatves’ pseudo-theory created in the 1980’s that claims the Constitution is not a living document, written broadly to stand the test of time. Rather, they believe it must be interpreted as the Founders conceived, with the words being interpreted exactly as the document’s authors intended.

(Textualism, or originalism, has been called “a scam” and Thomas has been blasted for “his hypocrisy” surrounding it.)

“Several Members of the Court noted that the Court’s decision would threaten the religious liberty of the many Americans who believe that marriage is a sacred institution between one man and one woman. If the States had been allowed to resolve this question through legislation, they could have included accommodations for those who hold these religious beliefs,” Thomas writes.

“The Court, however, bypassed that democratic process. Worse still, though it briefly acknowledged that those with sincerely held religious objections to same-sex marriage are often ‘decent and honorable,’” he continues, “the Court went on to suggest that those beliefs espoused a bigoted worldview.”

Believing that LGBTQ people are not equal to non-LGBTQ people is the very definition of bigotry.

Justice Thomas uses the word “bigot” four times in his dissent, which was joined by Justice Samuel Alito.

Senate Majority Leader Mitch McConnell is attempting to force through the nomination of Judge Amy Coney Barrett, giving the Court a 6-3 conservative super-majority.

Written by David Badash, The New Civil Rights Movement. Image by Thomas Cizauskas via Flickr and a CC license