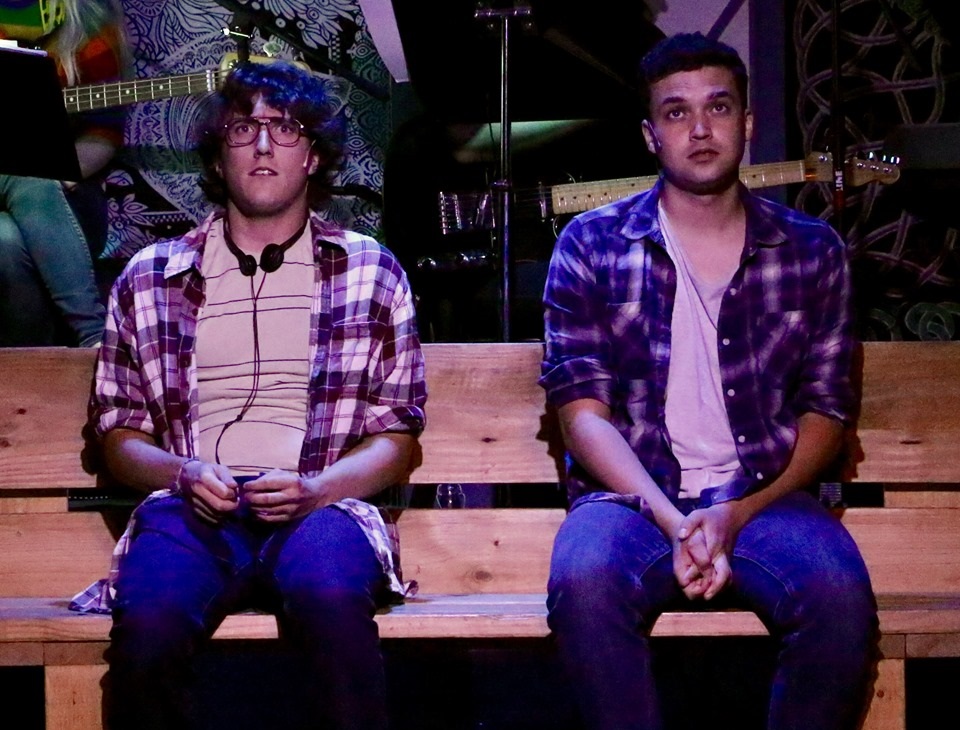 In Critiques For The Culture’s latest contribution to GayRVA, Taneasha White and Brooke Taylor review the Richmond Triangle Players’ Girlfriend, a love story about two young men coming of age in the 90s.

Girlfriend, written by Todd Almond and based on the 1991 album of the same name by alternative rocker Matthew Sweet, recently completed its run at Richmond Triangle Players. This pop-rock musical is based in Nebraska during the 1990’s, and centers on two new high school graduates. The young guys spend some time exploring their new found affection for each other, despite rural surroundings and traditional parents.

Our Critiques for The Culture rating is based on representation of marginalized folks, showcased with our Black fists. Our overall rating is the quality of the play overall, independent of the representation that may or may not be there, represented with stars.

My main criticism is with one of the primary story arcs of the show: The glamorization of red flags in relationships is a real problem for the LGBTQIA+ community, and the main character was the subject of manipulative tactics that we so often normalize. The audience chuckled every time that Mike, the straight-passing guy, mentioned his “out-of-town girlfriend,” but the “girlfriend” was nothing more than just a way to cover up his sexuality. This resulted in much of the emotional angst for Will, who ended up being the “undercover boyfriend” for a good portion of the show.

As easy as it is to write off manipulation in an ordinary coming of age story, it is important to call out: a relationship is not healthy if your partner forces you to hide or lie about your identity. Additionally, this show wasn’t unique when it came to casting choice — cis white gay men have quite a monopoly on Queer representation. 1.5 Black Fists.

This show was fun and light-hearted, reminding me of crushes that I had at a young age. Does she like me? Should I make the first move? How will I know? (Cue Whitney Houston.)

Girlfriend was an amusing play to watch. It did not take itself too seriously, which can be difficult to avoid in theatre. The live band was an added bonus, and the absence of an orchestra pit made the musicians feel like an integral part of the play’s structure. Even the choreography felt whimsical in nature. Cooper Sved’s portrayal of Will reminded me of Jordan Fisher from the 2018 live version of Rent! – very smooth in movements and line delivery. Ray Wrightstone’s characterization of Mike was brilliant, showcasing his ability to draw the audience into that classic teenage dating angst. Overall: 3.5 Stars

Richmond Triangle Players is the spot in the city where you can anticipate the plot of a show to be at least a little gay. That being said, when it comes to representation, this show didn’t exceed my expectations, because cis white guys tend to be the face of queer media. Luckily, there has been a lot of work being done to showcase the fullness of the queer community: the rise in popularity of TV shows like RuPaul’s Drag Race and Pose, or some of the central characters in Netflix’s Sense8 – but we could always use more.

I know that this show has been cast with white dudes in the past, but there’s always opportunity to shake things up, and ensure the art you’re putting out is representative of the community you’re serving. I’m always here for Queer stories that represent life, and I’m looking forward to seeing more of myself and the people I love within them. 2 Black Fists.

Sved and Wrightstone were adorable, and did a great job of making the audience feel all of those butterflies we feel when we have a crush. I appreciated how accurate the awkwardness was, and it definitely was cause for some high school reminiscing — all of the giggles, the slow hand-holds, stumbling over your words. I admit it: I love a good story arc that ends in gay love. Call me a sap if you wish, I accept it.

I also appreciated the musical arrangement of this show — it served as a thread that held the show together. There was a bit of very simple choreography, and it added to the natural, youthful feel of the show. It was very light on its own, and the upbeat music aided in keeping it that way. 4 Stars.

Critiques For The Culture

Critiques for The Culture is a conversational podcast and WRIR radio show that focuses on the socio-political themes found within current movies, TV, and plays — covering all with humor. Hosted by two Black Queer folks of varying opinion, Critiques for The Culture aims to dissect our media, point out where we aren’t represented, and say what the rest of us are thinking. Taneasha and Brooke make up the CFC duo -- a couple of Black Queer folks who love their community, and love watching TV and movies.

Top posts by Critiques For The Culture

The National Straight Pride Coalition, the California "straight pride parade" group from last year, is back -- just what we need in the... READ MORE

The new Taylor Swift album has launched a fresh round of fan speculation about the singer-songwriter's relationship with LGBTQ identity.... READ MORE

The National Straight Pride Coalition, the California "straight pride parade" group from last year, is back -- just what we need in the... READ MORE

The new Taylor Swift album has launched a fresh round of fan speculation about the singer-songwriter's relationship with LGBTQ identity.... READ MORE