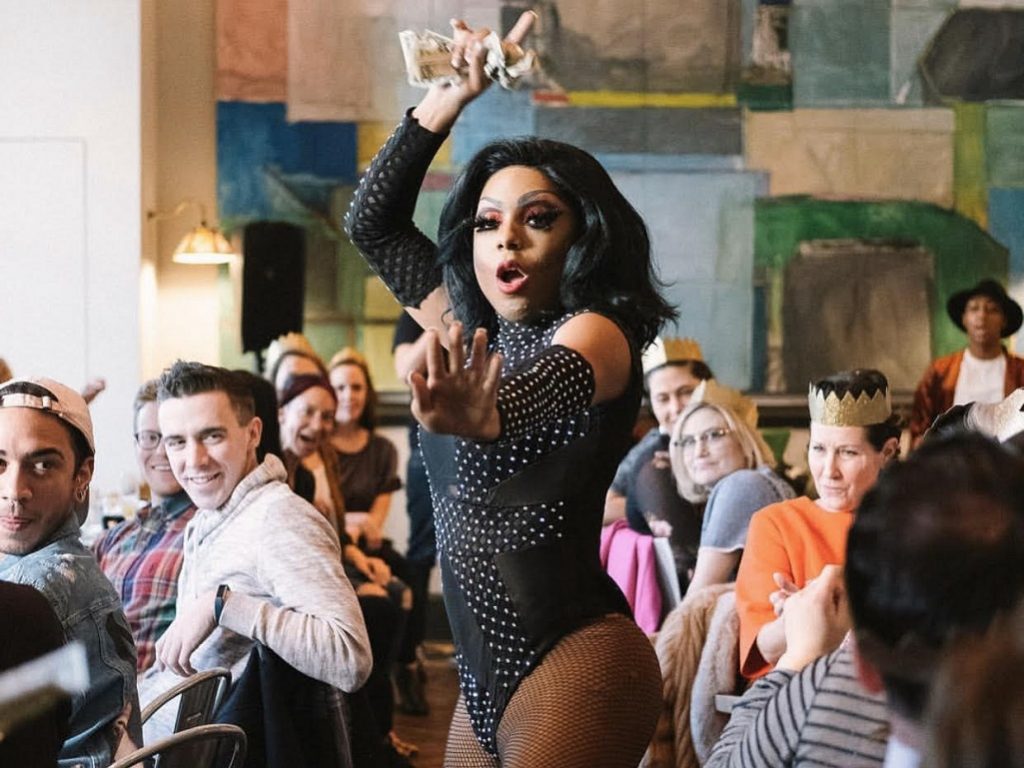 For Richmond drag performer Melanin Monroe, drag has been the key element in moving beyond her struggles and achieving her full potential.

“Performing is an escape. It’s therapeutic,” Monroe said. “Drag has actually saved my life. It added so much happiness to my life. It made me comfortable being myself.”

Monroe began performing in drag almost three years ago, after she was inspired by local queens, like her drag godmother Raquel Colby, and the crowds they attracted. As a long-time dancer and musician, Monroe has always loved to entertain and connect with an audience.

“It’s a level of energy, like having three vodka Redbulls. It feels so good to be able to share that experience with somebody,” Monroe said. “When I watch a performance, or when I’m doing a good performance myself, and I see the crowd reacting, that feeling is what made me submit myself. Just thinking, we’re going to do this all the way through. This is what we are going to live on.”

Her passion and excitement for drag and performing is what keeps her dancing the night away every Thursday at Babe’s of Carytown, or at the numerous shows she books a week — even after a full day of work.

“I get home from work, I shave my beard, and get ready to perform. For me, because drag is so much fun for me and such an escape, I don’t mind having show after show after show on top of my 9 to 5, showing up to work in the morning looking dead with glitter still in my eyes,” Monroe said. “It’s hectic, but I wouldn’t have it any other way right now.”

Her busy schedule makes the unbridled and uninhibited energy that Monroe brings to each performance even more impressive. Her glamourous costumes and bouncing dance style make her hard not to love, and impossible to ignore. Inspired by Southern pageant styles of drag, Monroe often chooses glamorous gowns or spangled leotards for her performances.

“Melanin is your rich ghetto auntie who has had one too many drinks,” said Monroe. “She’s really bougie, really high class, but she is not afraid to fight for her kids.”

Monroe credits the Richmond drag scene for her quick progression as a queen. Constructive criticism and guidance from those around her ensure that she is always improving. Beginning in amateur competitions around the city, Monroe formed fast and deep connections with her peers and was welcomed into a close-knit drag family with queens like her drag mother, Aaliyah Michaels Ova, and close friend and drag sister, Jasmen Clitopatra. The queens Monroe surrounded herself with helped her to improve her makeup and define her dance style, which Monroe describes as “HBCU majorette band girl dancing as hard as she can.”

“There are some great people that help foster and grow drag entertainers in other areas, but I would not want to start out anywhere but Richmond,” Monroe said. “If you look at where I started and how far I’ve come and all I’ve done so far, I don’t think drag would have been as positive for me anywhere else. Richmond has a lot of support, a lot of love, and a lot of people who are always willing to help.”

Born and raised in Richmond, Monroe has always made giving back to her community a priority, in and out of drag.

“Some people volunteer with their hands; they pick up trash or feed the homeless. For me, my expertise is more in event planning and performing,” she said. “Every event I put on that gives back to the community is a drag show, a ball, something entertaining where I know I can best apply my talents directly and feel like I’m getting the best outcome. That’s my whole heart. I love throwing my body on the ground for charity.”

Her reign as Nationz Closetball diva is coming to an end, after winning the title almost a full year ago at the non-profit’s annual pageant.

“I have had the absolute time of my life with Nationz because all of the amazing things they do in our community,” said Monroe. “They have the food pantry, they do free HIV and STI testing, they provide mental health services.” Before last year’s Nationz Pageant, she had previously worked with the group doing charity events at VCU, and couldn’t wait to get more involved.

“Just to be able to be a part of an organization that gives so much back, that’s the kind of title that I always want to be a part of,” Monroe said. “I was looking for something that gives back, and they do so much for our community. Just being a part of something bigger makes me so happy, which is why I’ll be so sad when my reign is over. I’ll still volunteer with them, but being a direct representative has been everything to me.”

The Nationz Weekend pageant, which determines the community leaders of the non-profit organization, was Monroe’s first drag pageant. She was a nervous wreck, but felt she did all right during the presentation and evening gown portions of the night. However, when it came time for talent, she came alive. She went on to win the competition, much to her surprise and excitement.

“You can see it on my face, the feeling of ‘wait, me?’ I was so shocked. I was so emotional. I can’t even put it into words,” Monroe said. “Competing is everything to me. I’m not in a pageant just for the money. For me, it’s getting to compete against people, to learn from people, to form new friendship and bonds. You can’t put a monetary value on that.”

Though Monroe has always been at home in front of a crowd, doing drag has helped her extend that confidence offstage as well.

“Before I started drag, I always struggled with being fully accepting of myself,” she said. “The more I’ve gotten into doing drag and the more I’ve progressed with it, I’ve gotten a stronger level of confidence.”

Today, Monroe credits drag with helping her work through issues with toxic masculinity and internalized homophobia, and helping her achieve her full potential.

“That flip, that escape into me really accepting and loving who I am and how I get to express that really helped me put those things to bed,” she said. “Melanin unlocked a new level of happiness. I would not be the person I am today, or where I am today, without drag.”