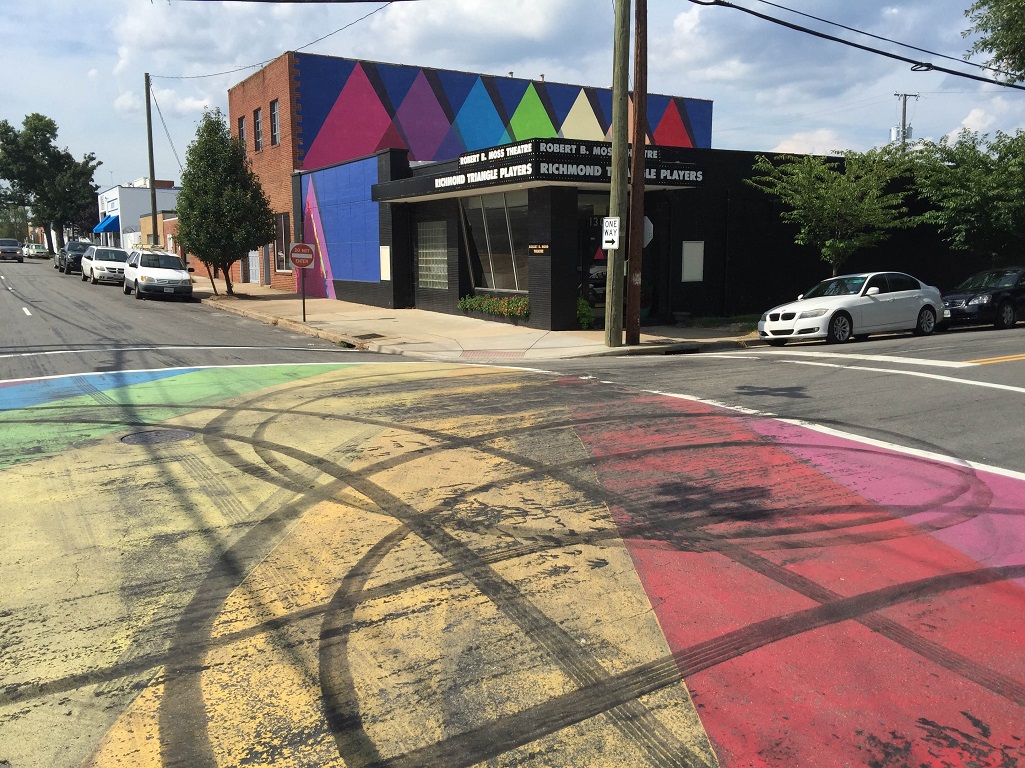 The driver of a Lexus with drift-enabling modifications did donuts across the rainbow intersection outside Richmond Triangle Players’ Robert B. Moss Theatre.

Yesterday an obnoxious driver did donuts across the rainbow painting in the intersection of Marshall and Altamont streets in Scott’s Addition, seemingly with the intent to vandalize. The rainbow, an LGBTQ-affirming message of support from the city, is located in front of the Robert B. Moss Theatre, the home of LGBTQ theatrical troupe Richmond Triangle Players.

The act was witnessed by RTP Artistic Director Lucian Restivo, who caught a glimpse of the driver’s license plate, as did RTP Executive Director Phil Crosby. “Some jerk with the license plate “Is King” just purposely made three donuts on our Pride Plaza!” Crosby wrote on Facebook. “I wonder if defacing public art is a crime?”

“Doing donuts” is the act of throwing a car into a circular skid, generally with the intent to leave a rubber skid-mark on the road.

Restivo took a picture of the car as it fled the scene. The license plate Crosby identified is registered to a 2004 Lexus IS 300, which matches the vehicle in the photo. The car also has modifications of the sort used to facilitate drift racing, including a ground-effect body kit.

The incident was reported to Richmond Police.

“The Richmond Triangle Players have been an integral part of the Richmond community for more than a quarter century and have been leaders in promoting diversity,” Gray stated. “Their strong commitment to the City’s LGBTQ community is exemplified by the Rainbow Crosswalk painted last year in front of their theater in the Scott’s Addition neighborhood. One individual’s senseless act of vandalism will not deter our commitment to equality and diversity. I pledge to work with the Triangle Players and the City administration to take whatever immediate action is necessary to restore and repaint this crosswalk.”

If you have any information on this incident, please contact the Richmond Police Department.