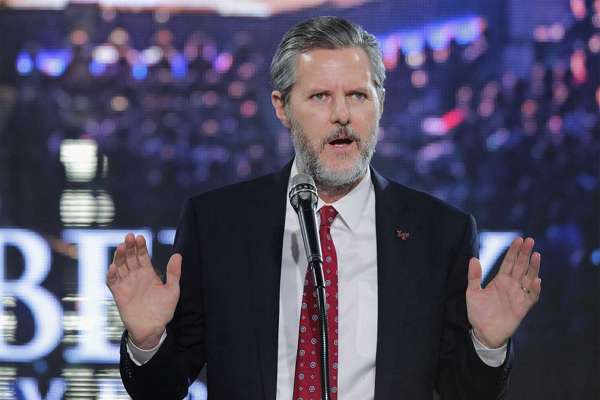 Recently, Jerry Falwell Jr. “mutually agreed” with the Liberty University Board of Trustees “to take an indefinite leave of absence” as LU’s president. The “agreement,” or more likely Falwell’s forced acquiescence, to step down comes in the wake of a “racy” photo surfacing that reveals the former university president at a Trailer Park Boys-themed party with his pants unzipped and his underwear and stomach exposed, holding a (presumably alcoholic) drink, with his arm around a younger woman whose pants are also undone.

Of course, the irony is that Falwell was, until August 7, the leader of Liberty, the world’s largest evangelical university, a school that fines and punishes students for the activities that Falwell, his family, and others are caught doing in the photo and an accompanying video. After the photo and video surfaced, the Board decided that Falwell’s presidency of LU needed to come to an end — for now, at least.

Many online have celebrated Falwell’s removal, even if it is only temporary — and for good reason. This bizarre photo is nothing new in how Falwell has conducted himself in the years after taking over the school in 2007. Since, Falwell has established for himself a full resumé of bigotry and accompanying antics. A zealous supporter of Trump, whom he invited to speak on MLK Day in 2016, Falwell also recently published a racist tweet proclaiming that he would only wear a face mask during the pandemic if it had a photo of a man in black face and a man in a KKK uniform.

He has, moreover, a lengthy track record of censoring student free speech on campus and muffling student dissent, in addition to silencing faculty and university employees; university-wide fearmongering; lying; hypocrisy; questionable business deals; making, along with his wife, openly transphobic remarks; gesturing toward shooting “Muslims” if they were to step foot on LU’s campus; and putting students in danger by keeping Liberty open during times of COVID; among other unsavory public statements and actions.

That it took this particular photo to give Liberty’s Board of Trustees pause speaks volumes about both Liberty and US evangelicalism more broadly. Falwell’s extensive and sustained track record of genuine wrongdoings, briefly listed above, was not what tipped the scale to have him ousted from his position. Rather, a photo in which he posed with a young woman in partial undress, a photo that in actuality reveals very little, was the straw that broke the camel’s back.

Years of overt racism, Islamophobia, and transphobia, in concert with tyrannical leadership and governance, did not seem to be of much concern for the Board of Trustees, which is of course no surprise given the university’s so-called religious “commitments.” Indeed, many evangelicals have little concern for denouncing racism, homophobia, and Islamophobia because of how heavily their faith is invested in white supremacy, heteronormativity, and their belief in their own religious superiority. But instead of addressing Falwell’s many instances of chauvinism and intolerance, the Board suddenly seemed to care about Falwell’s public persona when the so-called “purity” of a woman — and by extension the “purity” of Liberty — was threatened by him posing in what is, in truth, an emphatically benign photo.

That it was this photo — and not, say, Falwell’s racist tweet — that brought about his removal as president points to the way that LU and the evangelical church are not invested in being moral or upright. They are, by contrast, significantly more concerned with looking moral in their own estimation; that is, with appearing upright by the standards of other evangelicals.

In lieu of removing Falwell for making qualitatively harmful and hateful declarations over the past several years as LU’s president, the Board of Trustees opted to remove him for a picture that reveals little, other than Falwell’s belly and underwear, and does little actual harm — other than to the reputation of the university, which upholds standards of sexual “purity” that are arguably more damaging to the school’s name than the photo itself.

The Board of Trustees’ recent decision demonstrates that though they (finally) took the moral high road to remove Falwell, the cause for his removal was not about actual misconduct. For if the Board was actually concerned with misbehavior, Falwell would have been dismissed long ago. The Board’s decision was, instead, catalyzed by the optics of evangelical morality — that is, the desire to seem moral without actually changing how one lives. The major difference between Falwell, LU, and the wider evangelical community, however, is that Falwell was caught, figuratively and literally, with his pants down.

In light of the school’s prudent removal of Falwell from his post, it is high time to stress how much work Liberty has to do, particularly as it relates to diversity, equity, and inclusion. Though many believe that Falwell will likely be back after tritely “repenting” for his past misdeeds — not to mention how several have wondered if his current replacement is simply a puppet under Falwell’s control — it nonetheless bears mentioning what needs to be undone in regard to the institutionalized bigotry for which Falwell and his late father are, in large part, responsible.

Not only does the school have a one-on-one gay conversion therapy program — and a group version thereof — but it is also home to a rampant culture of homophobia about which another graduate also recently wrote, detailing her experience as a lesbian.

Additionally, Black students and staff have made known the white-supremacist culture of Liberty over the past several months. A former Black student at Liberty recently came forth with a story about a white LU instructor making a so-called “joke” about not having to worry about being whipped as a form of punishment. Moreover, a former queer, African American employee described when he, as the director of diversity retention, was forced to delete a tweet that read “BLACK LIVES MATTER” — a statement that is not and should not be considered controversial. He further explained: “I suppressed so much of my humanity as a black and queer man in being [at Liberty].”

The way women are treated and expected to act at Liberty further reveals how far the school has to go in order to align itself with the baseline social mores of 2020. A Twitter thread from earlier this year, which is as laugh-out-loud comical as it is illuminating about the normalized sexism at LU, gives voice to the experiences of a number of women who attend or attended Liberty.

In concert with the school’s academics, which a former professor describes as having “fallen dramatically over recent years,” Liberty’s campus culture of homophobia, racism, and sexism — an unholy trinity of discrimination, so to speak — needs to be addressed. For a university to have such a publicly-known, institutionalized, and flagrant ethos of intolerance, one that actively works against minority students’ very personhood, should be of great concern for the Southern Association of Schools and Colleges, the governing body that accredits Liberty.

Despite the fact that Falwell is now (temporarily?) gone — which is of course a victory in and of itself — Liberty has far to go in regard to how it treats its students who are not straight white men. If Liberty ever wants to be taken seriously as an institution of higher education — a goal yet to be realized, particularly by the standards of those in academia — it will have to begin updating its equity, diversity, and inclusion practices to fit the century in which it finds itself.