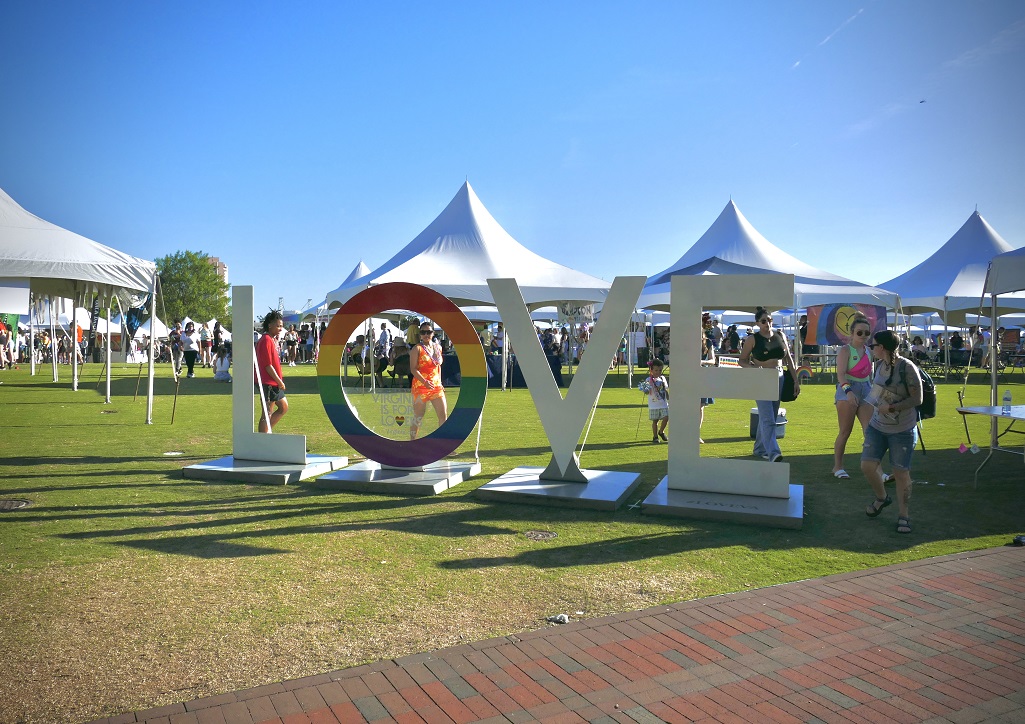 Hampton Roads Pride Fest: Thanks, I Needed That

We’re only halfway through 2022, and already it’s been a rough year for the LGBTQ community. While overt attacks on transgender people in particular have been happening for a while now, legal actions by states like Texas and Alabama have outright made it unsafe for trans youth and their families to even live in those states. Then, on Friday, June 24, Clarence Thomas let us know that all of us are under fire. In a concurring opinion to Samuel Alito’s majority opinion in the Dobbs v. Jackson Women’s Health case, which overturned Roe v. Wade and criminalized abortion in over half of the country, Thomas wrote that Griswold v. Connecticut (the case that forbade banning contraception), Lawrence v. Texas (the case that forbade criminalizing same-sex relationships), and Obergefell v. Hodges (the case that forbade banning same-sex marriage) should all be reconsidered. It was a clarion call letting the entire country know that our rights are on the chopping block once again.

It was in that context that my wife and I were considering whether we would drive down to Norfolk’s Town Point Park on Saturday, June 25, for Hampton Roads Pride Fest. On one hand, we were both struggling with the emotional strain of the target our legal system has placed on the backs of all LGBTQ people. We wanted to go to HR Pride so that, if nothing else, we could do our part to let the world know we’re still here and we’re not going away, regardless of how the ascendant forces of totalitarian oppression might feel about it.

On the other hand, we were pretty close to broke. Inflation and gas prices have been hammering us. Between the two of us, we work four jobs, and it’s still all we can do to keep utilities paid. After a few comfortable years of not having to keep strict track of how much we were spending at the grocery store, we’re watching every penny once again. Driving to Norfolk was probably going to cost $50 in gas alone, plus whatever we’d spend on food and parking. We knew we probably shouldn’t do it.

Then the Dobbs v. Jackson Women’s Health Organization opinion came out on Friday, and we looked at our paycheck stubs and our bank account balances and we said, “Let’s go anyway.” Because letting the world know we’re still out here and we’re not going away is just too important right now. And if nothing else, we both had a great need for the jolt of positive vibes we’d get from being surrounded by other queer people and celebrating Virginia’s vibrant, colorful LGBTQ community.

We’re not exactly early risers, and Norfolk’s a bit of a drive from Richmond, so we didn’t make it down to Town Point Park until around 6 pm. Thankfully, though, the event, which started at noon, was still in full swing. Droves of people filled the park, dancing and cheering at the stages, wandering among the many booths set up toward the park’s entrance, walking the boardwalk and appreciating the sunlight shining across the Elizabeth River, through the many different Pride flags that had been raised along the boardwalk’s row of flagpoles.

We got there just in time for Thelma Houston‘s headlining set, and watched a good portion of it. The legendary disco diva, best known for her iconic chart-topping 1977 hit “Don’t Leave Me This Way,” may be well into her 70s by now, but she worked the stage under the heat of the sun with an intensity you don’t often see in performers half her age. The crowd down at the front of the stage responded rapturously, and Pride flags flew as hundreds of people danced and sang along in ecstatic celebration, especially when she ended her set with a fiery performance of her signature song, exhorting the crowd to take the backing vocal part on the choruses. They obliged with passion and joy.

Meanwhile, over on the Club PrideFest stage, a drag performance was going on that immediately attracted my attention as Sara and I walked up from the side of the stage, via the boardwalk. A performer was onstage in a red cape, with outlandish horror movie makeup on, made up to look pregnant and waving a coathanger in the air. I wasn’t catching everything that was happening, but the overall point was obvious: the loss of Roe v. Wade, the stripping of reproductive rights from the majority of the nation, is a very bad thing, and we should all be concerned — whether we’re breeders or not. The crowd up front was cheering on the people on stage, signaling their furious agreement with the overall sentiment.

Indeed, pro-choice, pro-reproductive rights slogans were almost as common throughout the park as Pride flags. It seems that the crowd who made it out to Hampton Roads Pride Fest was largely appalled about the loss of Roe v. Wade‘s protection for the right to get an abortion, and I couldn’t agree more. I may not be able to get pregnant myself, but to put it bluntly, I am transgender, and I do rely on medical care from Planned Parenthood to keep my body’s hormonal balance properly regulated. The community of activists and medical professionals who work in favor of reproductive rights have a history of being allies for the LGBTQ community, and if you ask me, it’s the least we can do to stand alongside them now at a time when they’re under attack. This was a common sentiment at Hampton Roads Pride Fest as well.

I did hear from a volunteer for Norfolk’s LGBT Life Center that a group of Christian right-wing protesters had showed up around the time HR Pride kicked off to denounce the event and all who were there to celebrate. Fortunately, from what the volunteer said, the protesters were run off by 12:30 or so. By the time Sara and I were running around the park, during the 6 and 7 o’clock hours, there was no sign of negativity in evidence. Indeed, we were heartened by the crowd, full as it was of young people who were clearly thrilled to be in a place where they could display their own identities with pride and meet like-minded folks their own age. Seeing such a youthful crowd at a Pride Fest gives me hope for the future, even as the legal system sets its sights on us; when there are so many young people growing up with positive cultural experiences of the LGBTQ community, it’s going to be harder and harder for the forces of repression to hold us all down. At least, I sure hope so.

Overall, Sara and I had a great time at Hampton Roads Pride Fest, and a single look around was enough to show that a lot of other people did too. All over Town Point Park, people were walking around checking out the booths and enjoying the entertainment on multiple stages. The lines for food and beverages were admittedly quite long, though not catastrophically so. But the main thing people were up to throughout the park was just hanging out. Whether they were taking group pics at the giant LOVE sign, strolling along the waterfront, dancing to the music in colorful outfits, or sitting on the grass chatting, everyone was enjoying spending time with both new friends and those they already knew. It felt like one big love fest, and the overall vibe was one of welcome. I won’t pretend it solved every problem facing Virginia’s LGBTQ community right now, but it did feel at least one need: it gave everyone a good reason to keep hope alive for another summer. As for my wife and I, we might have to make a partial payment on our gas and water bill this month, but regardless, we were really glad we went. It was absolutely worth the trip.

All Photos by Sara Wheeler