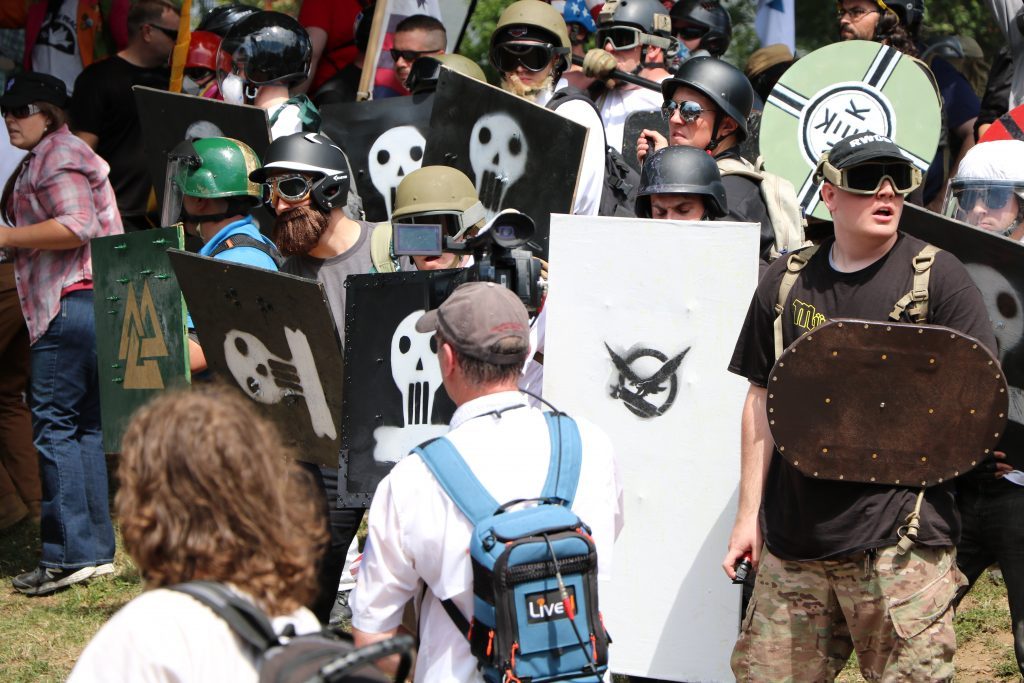 Hate crimes in Virginia rose nearly 50 percent from 2016 to 2017. This year, Attorney General Mark Herring proposed legislation to deal with the problem… but all of the bills died in the General Assembly.

Virginia recorded more than 200 hate crimes in 2017 — up nearly 50% from the previous year, according to the latest data from the Virginia State Police.

That surge, along with the neo-Nazi rally that left a counterprotester dead in Charlottesville two years ago, prompted state Attorney General Mark Herring to propose legislation to address the problem. However, all of the bills died in this year’s General Assembly.

The FBI defines a hate crime as a “criminal offense against a person or property motivated in whole or in part by an offender’s bias against a race, religion, disability, sexual orientation, ethnicity, gender, or gender identity.”

According to data from the FBI’s Uniform Crime Report, 7,175 hate crimes were reported across the U.S. in 2017. About 60% of those crimes were related to race, 21% to religion and 16% to sexual orientation.

In Virginia, hate crimes jumped from 137 in 2016 to 202 the following year, according to the Virginia State Police. Virginia had more hate crimes in 2017 than during any year since 2008.

Herring has been concerned about the issue for several years. In 2016, he launched his “No Hate VA” initiative, which included creating a website and holding discussion groups across the state to address the rise in hate crimes.

“I’m putting these ideas forward and convening these roundtables because it’s time for action,” Herring stated in a press release.

“I will do everything I can and work with anyone who wants to ensure that all Virginians are protected from hate and violence, no matter what they look like, how they worship, where they come from, or who they love.”

In August 2017, a white supremacist rally in Charlottesville turned deadly after James Alex Fields Jr. drove his car into a crowd of counterdemonstrators, injuring dozens of people and killing Heather Heyer. Herring then amped up his fight against hate crimes and white supremacist groups.

In 2018 and again this year, Herring called on the General Assembly to pass laws dealing with hate crimes. His 2019 legislative agenda included:

Virginia defines a hate crime as “any legal act directed against any persons or property because of those persons’ race, religion or national origin.”

Legislation to expand Virginia’s definition of a hate crime was carried by Sen. Barbara Favola, D-Arlington. SB 1375 was killed in the Senate Courts of Justice Committee on an 8-6 party-line vote, with Republicans voting against the bill.

Democratic Sens. Louise Lucas of Portsmouth and Creigh Deeds of Bath County sponsored the legislation to prohibit paramilitary activity. SB 1210 sought to charge individuals with a Class 5 felony if “a person is guilty of unlawful paramilitary activity if such person assembles with another person with the intent of intimidating any person or group of persons by drilling, parading, or marching with any firearm or explosive or incendiary device or any components or combination thereof.”

In all, 10 bills before the General Assembly this year attempted to address hate crimes. Seven of the bills were defeated in the House of Delegates and three in the Senate.

For example, two identical bills were introduced to let local governments prohibit firearms at public events: HB 1956 by Del. David Toscano, D-Charlottesville, and SB 1473 by Deeds. Both measures aimed to authorize “any locality by ordinance to prohibit the possession or carrying of firearms, ammunition, or components or any combination thereof in a public space during a permitted event or an event that would otherwise require a permit.”

Both bills died in their chamber of origin.

Despite the lack of legislative action, advocacy groups across Virginia are working to help victims of hate crimes. Assistance ranges from counseling to lawyer referrals.

Herring’s “No Hate VA” includes resources for victims of hate crimes as well as advice on how to report a crime.

The website encourages victims to immediately report hate crimes to the police and to their local FBI office. The FBI has an online form at https://tips.fbi.gov

A Run-in with Hate: One Man’s Story

What started as a normal evening hanging out with friends took a quick turn for Richmond resident Phillip Sampson. As Sampson was walking down the street with a friend, a stranger approached. Sampson, who describes himself as having an outgoing personality, went to greet the passerby with a friendly “Hello!”

Before the words came out, Sampson was struck across the chest with a fist to his shoulder, knocking him back, while slurs were shouted at him.

“Expletives start flying out, and he starts cursing at me and yelling, and I’m like ‘what is going on?’” Sampson said.

The individual, who Sampson later found out is his friend’s brother, continued to yell at him and his friend before trying to break into the friend’s car. Still in shock over the situation, Sampson went to sit in his car and wait for the police to arrive.

Sampson identifies as gay and believes that was the motive behind the incidents. Having never been in this type of situation before, he was relieved when police arrived within minutes.

He said the two officers who arrived handled the situation professionally and took time to make sure he was OK. After telling the police what happened, Sampson said he was surprised by the compassion and genuine concern expressed by the officers.

“They walked me through what my options were and provided contact information so that I could reach out if I needed anything,” Sampson said.

He considers himself lucky that he was not seriously hurt but feels others in similar situations might not be as fortunate.

Sampson said that he did not need to utilize any victim resources, but he is glad to know that they are available to others.

“I was happy to see what was available to me had I needed them,” he said. “It’s comforting to know that there is help out there for those who really need it.”

Just in case you didn't already know what kind of people the "straight pride parade" organizers were, it's now come out that they... READ MORE

In this month's Amazon Trail, Lee Lynch explains that the right-wing insurrection we're dealing with now in the United States is nothing... READ MORE

Just in case you didn't already know what kind of people the "straight pride parade" organizers were, it's now come out that they... READ MORE

In this month's Amazon Trail, Lee Lynch explains that the right-wing insurrection we're dealing with now in the United States is nothing... READ MORE