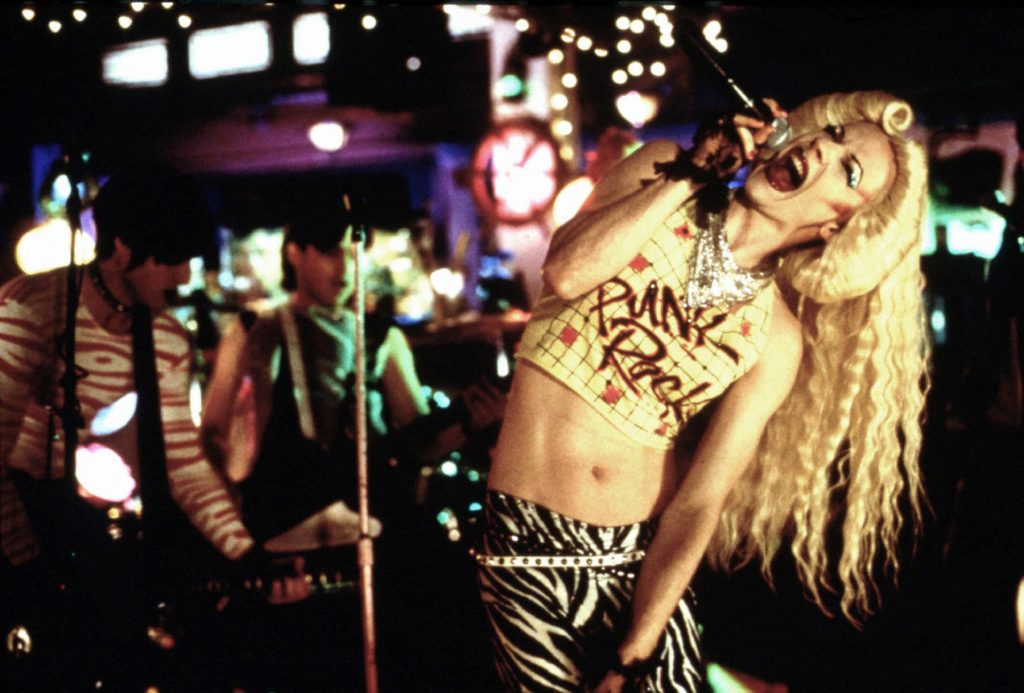 The new Criterion Collection reissue of Hedwig And The Angry Inch brings us the ultimate version of a classic film about love, gender, and rock n’ roll.

Somewhere between Michael Fassbinder and Todd Haynes, fist-pumping and strutting in magnificent wigs and gender-bending till morning, is the pulsating and emotionally decadent Hedwig and the Angry Inch.

Born out of a D.I.Y. punk aesthetic from its original off-Broadway stage production, the film follows wannabe rock star Hedwig (John Cameron Mitchell) in her journey to follow her former protégé/boyfriend teenage Tommy Gnosis (Michael Pitt). According to Hedwig, Tommy stole the songs they wrote together. Then he became something of a cultural music phenomenon, performing in massive arenas while poor Hedwig was left totally high and dry.

Tommy’s popularity has made him a bona fide rock star to the fullest extent, the voice of a generation, so much so that now the tabloids have caught wind of the two’s previous relationship and feel that Hedwig’s accusations of theft are headline-worthy.

The band supporting the downtrodden but ever persistent and optimistic Hedwig is “The Angry Inch,” who tour from town to town in seedy suburban, wood-paneled chain seafood joints in hopes of catching on, tearing up the stage (it’s not really a stage) as disinterested and/or angry customers load up plates from the salad bar. It really is a sight to behold such rich pageantry.

As the film proceeds, we experience Hedwig’s act, in which she sings and regales her audiences with flashbacks to the cruel twists and turns from her past. These darkly humorous tales, told through song and monologue, not only inspire and define her work but illustrate Hedwig’s anguish and her existential search for her one true love — her other half, as the film’s centerpiece song, “The Origin Of Love,” would have it.

We quickly learn that Tommy is not, in fact, the first man to betray our dear Hedwig. Growing up in East Germany as an attention-deprived “girly boy” named Hansel Schmidt, she/he found salvation through rock and roll — David Bowie, Lou Reed, and even the deceptively Canadian Anne Murray. The Berlin Wall was erected the year Hansel was born, and he too found himself disaffected, in a world literally divided into two, with seemingly nowhere to go.

The young Hansel was largely ignored and neglected by his parents until eventually encountering an American soldier (while sleeping in a bombed-out crater, no less) who Hansel quickly falls for. However, this only lasts until a botched back alley sex-change operation, intended to create the opportunity for Hansel, who is now known as Hedwig, and the soldier to marry and return to the United States. The result of the surgery is a scarred one-inch mound between her legs — the original “angry inch” of the film’s title. Worse, this entire experience is soon revealed to be a ruse — the soldier quickly finds another man, and abandons the dazed and confused Hedwig posthaste.

Now divorced, Hedwig finds that she is alone in America. She begins to perform live songs with an all-Korean backing band while doing babysitting gigs and various odd jobs to make ends meet. It is at this point that she meets a sullen, confused, Christian teenager named Tommy, who is immediacy infatuated with her. The two fall for each other and Hedwig teaches Tommy “rock history, lyrics, grooming, and vocal training;” all very essential for future stardom.

However, once Tommy learns about Hedwig’s inch, he flees the relationship with their songs. While a personal vendetta seemingly fuels Hedwig’s dreams for stardom and validation, it’s heartache that inspires Hedwig’s music, which ultimately allows the film to speak convincingly to outsiders and the marginalized.

While box office success eluded Hedwig in its time, it still radiates as a vivaciously funny, amusingly tragic, and acerbically glammed-out rock musical with sonic blasts of energy. A major advantage of bringing Hedwig, originally a stage play, to screen is the showcase it allows for Mitchell, who co-wrote and starred in the stage play and now directs the film version while reprising his original role as Hedwig. Frequent use of close-ups allows for his face to convey the film’s emotional narrative, allowing the audience to key in on Hedwig’s underlying exhaustion and loneliness when her hair and make-up are down.

For all of Hedwig’s talk about finding “her other half,” you might wonder if Tommy and Hedwig are actually one and the same. The film’s mostly metaphorical ending is somewhat ambiguous, and have left many speculating on this theory. Regardless, nearly two decades after its release, there is little wonder why the production and the film have lived on and become cult favorites. In an era when questions of gender identity and civil rights for trans and non-binary people are at the forefront, Hedwig feels more modern than ever. But the film’s endurance goes beyond LGBTQ issues; Hedwig is a wonderfully crafted androgynous hero (lovingly flawed) who fights to be heard and loved. And really, who doesn’t identify with that?

Hedwig and the Angry Inch comes to the Criterion Collection for the first time on Blu-Ray with a considerable 4K digital restoration upgrade supervised by director John Cameron Mitchell and cinematographer Frank G. DeMarco. The sound has also been given a considerable boost, with a 5.1 surround DTS-HD audio upgrade. So you can donate your old DVD copy (with the horrendous cover) and experience the film in a splendid overhaul.

The supplemental material has also been stacked with a bevy of special features, including an audio commentary from Mitchell and DeMarco recorded in 2001, an intensive new conversation with the cast and crew, a conversation with rock critic David Fricke and composer and actor Stephen Trask on the film’s soundtrack, a 2003 documentary on the making of the film, a Sundance Channel Close Look at the creation of the Adam and Eve sequence, an examination of Hedwig’s creation, look, and legacy through its memorabilia, deleted scenes featuring Mitchell and DeMarco proving additional commentary, and the film’s trailer.

To round it off is a book included featuring production photos with an essay by writer Stephanie Zacharek along with portraits by photographer Mick Rock, illustrations by animator Emily Hubley, and even excerpts of texts (Plato’s “Symposium” and “The Gospel of Thomas”) that inspired the film. It really feels like the complete package, and if you are already a Hedwig convert, this is the ultimate version of the film.

In Tennessee, A Fundamentalist Attorney Is Attempting To ...

The 25-year-old YouTuber with over 12 million followers came out in a video posted on her YouTube channel after a blackmail... READ MORE

In Tennessee, A Fundamentalist Attorney Is Attempting To ...

The 25-year-old YouTuber with over 12 million followers came out in a video posted on her YouTube channel after a blackmail... READ MORE