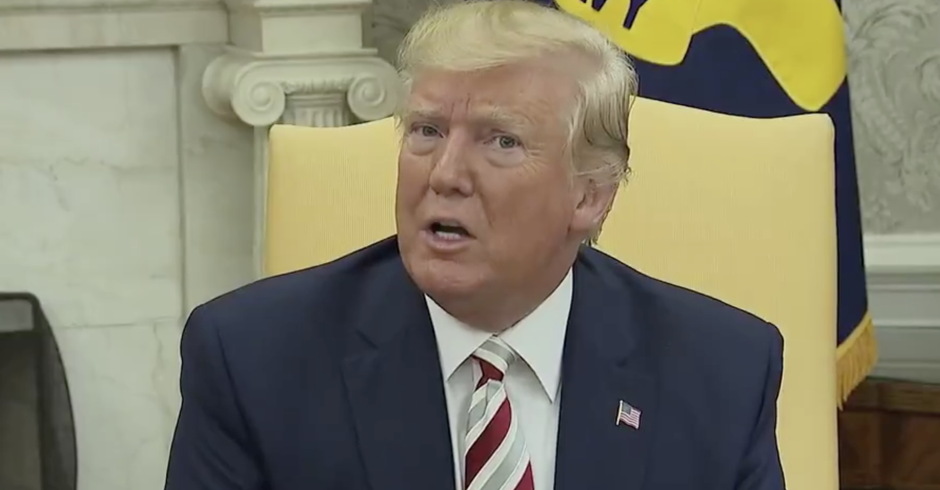 The group of gay Republicans didn’t even endorse Trump four years ago, but his administration’s lengthy record of anti-LGBTQ actions didn’t stop them from endorsing him this time.

Last Thursday, the Log Cabin Republicans shocked the entire United States with a Washington Post op-ed endorsing Donald Trump in the 2020 presidential election. And now Trump himself is using the endorsement as a shield from criticism.

In their rather mindblowing op-ed, Log Cabin Republicans chair Robert Kabel and vice chair Jill Holman wrote, “To be treated equally, fairly and justly under the law is our goal, and we know that ‘Inclusion Wins’ is a mantra we share with the president.”

The Log Cabin Republicans endorsement is particularly surprising in light of the fact that the group did not endorse Trump in 2016. The group made that decision based on the fact that Trump had never met with them, then a necessary step to receive their support. Trump has still not met with the Log Cabin Republicans; however, they’ve now chosen to endorse him anyway.

Their reasoning is laid out by Kabel and Holman in the op-ed as follows: “This is the party that Trump has helped make possible by moving past the culture wars that dominated the 1990s and early 2000s, in particular by removing gay rights as a wedge issue from the old Republican playbook.”

The group points to the Trump administration initiative to decriminalize homosexuality worldwide, the appointment of openly gay diplomat Richard Grenell as ambassador to Germany, and the administration’s stated intent to end the HIV epidemic by 2030 as reasons to believe that Trump and his administration have moved beyond using “gay rights as a wedge issue.”

However, the Trump administration has taken a variety of other anti-LGBTQ actions since Trump’s election three years ago, from the erosion of Civil Rights Act protections previously afforded to LGBTQ people under the Obama administration to the many gestures they’ve made toward privileging “religious freedom” over LGBTQ people’s rights to things like housing, employment, and even medical care.

There’s also the trans military ban, of course, and Kabel and Holman do mention the Log Cabin Republicans’ continued objection to that obviously anti-LGBTQ measure. “We are committed to letting all qualified Americans serve in the military, and Log Cabin Republicans was a leader in the legal fight to end the ‘Don’t Ask, Don’t Tell’ policy,” Kabel and Holman write. “We oppose the transgender service restriction and will continue to press the administration to reconsider.”

However, the endorsement stands, despite all of the obvious anti-LGBTQ actions Trump has taken. Log Cabin Republicans spokesperson Charles Moran told the Washington Blade that this was because they’re just so excited to be able to support an incumbent Republican who hasn’t voted against marriage equality. “We’ve not had a second term Republican president that Log Cabin has had the opportunity to endorse in quite some time,” Moran said. “2004 was the last time and we declined to endorse President Bush for re-election due to the constitutional ban on gay marriage he made a centerpiece of the campaign. So we really don’t have any [precedent] for a re-election to follow.”

REPORTER: Mr POTUS, your administration has been taking steps to make it easier to discriminate against LGBT people in the workforce. Are you okay with that?

Now, of course, Trump himself has picked up on this endorsement. He used it in a press conference yesterday to dodge a pointed question about anti-LGBTQ discrimination in the workplace, and actions his administration has taken to enable such discrimination. “Well I just got an award and an endorsement from a group… the exact group,” Trump said in response, as seen in a video posted to Twitter by Vox reporter Aaron Rupar.

“The Log Cabin group,” Trump continued. “And I was very honored to receive it. I’ve done very well with that community. Some of my biggest supporters are of that community, and I talk to them a lot about it… Peter Thiel and so many others, they’re with me all the way, and they like the job I’m doing.”

So now, not only have the Log Cabin Republicans chosen to ignore a vast amount of discrimination that affects them and the community they represent, they’ve given Trump himself an easy go-to defense for his discriminatory actions. And now we can no doubt expect to hear about this endorsement over and over throughout the 2020 campaign.

Please, can we get this guy out of here already?

Image via Screencap from Aaron Rupar/Twitter