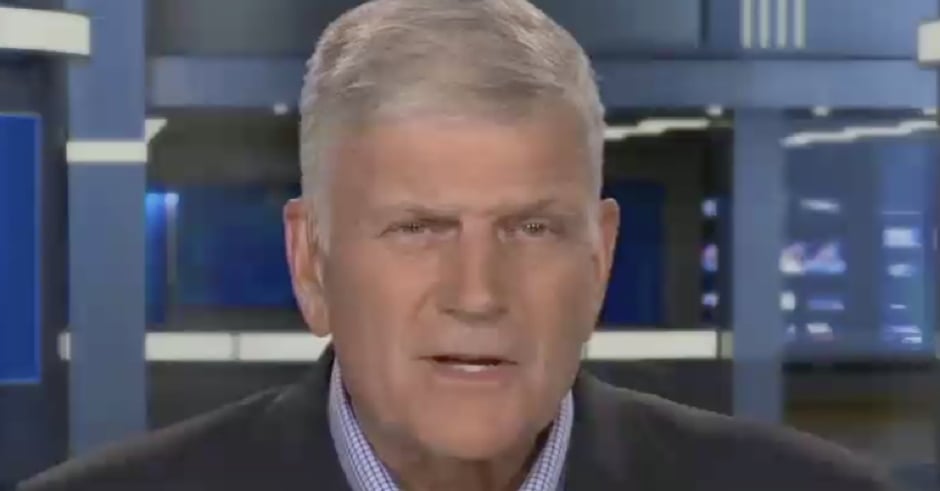 Right-wing evangelical Franklin Graham spent the weekend promoting anti-LGBTQ extremist hate to his nearly 10 million Facebook followers, including by attacking The Walt Disney Company, criticizing the Biden administration’s support of medically-necessary treatment for transgender children, posting a video of his home state’s Lt. Governor preaching jaw-droppingly vulgar attacks on transgender people, and even calling for “regime change” in the United States because he opposes science that support LGBTQ children and teens.

Graham kicked off his attacks on Thursday, the Transgender Day of Visibility (TDOV), calling the U.S. Dept. of Health and Human Services’ guidance, titled “Gender-Affirming Care and Young People,” “one of the most wicked initiatives that we’ve seen come out of Washington.”

He labeled HHS’s factual statement that “Research demonstrates that gender-affirming care improves the mental health and overall well-being of gender diverse children and adolescents,” a “lie from hell.”

“All of their manipulated research saying that it improves mental health or increases happiness is just a lie from hell. What it really does is destroy the lives and futures of these children,” declared Graham, who has no medical, scientific, or child development degrees.

“Churches and followers of Jesus Christ must stand against this evil agenda,” Graham preached. “Politicians who support this shouldn’t be in leadership, and we need to work to get them out of office in the next election — whether they’re Republican or Democrat.”

“Speaking of regime changes — we need one in this country,” he concluded.

“Disney is indoctrinating children with the LGBTQ agenda — and they don’t even try to hide it,” Graham declared, linking to a Fox News article titled, “Woke Disney: 10 families who are swearing off Disney due to its left-leaning politics.”

“I certainly hope parents wake up to what Disney is trying to do and protect their children and grandchildren from the lies this once-great company is now so willing to promote,” he added.

Graham followed that attack on Sunday by posting the vile 2021 video of North Carolina’s Republican Christian nationalist Lt. Governor Mark Robinson that made him infamous.

In it Robinson calls the transgender movement “demonic,” and “full of the spirit of Antichrist.”

“They’re dragging our kids down into the pit of Hell,” Robinson adds.

Graham did not weigh in on the video, other than posting it and writing, “This preacher is our NC Lieutenant Governor Mark Robinson,” but last year he rushed to defend Robinson after that video — in which he calls LGBTQ people “filth” — was widely denounced.