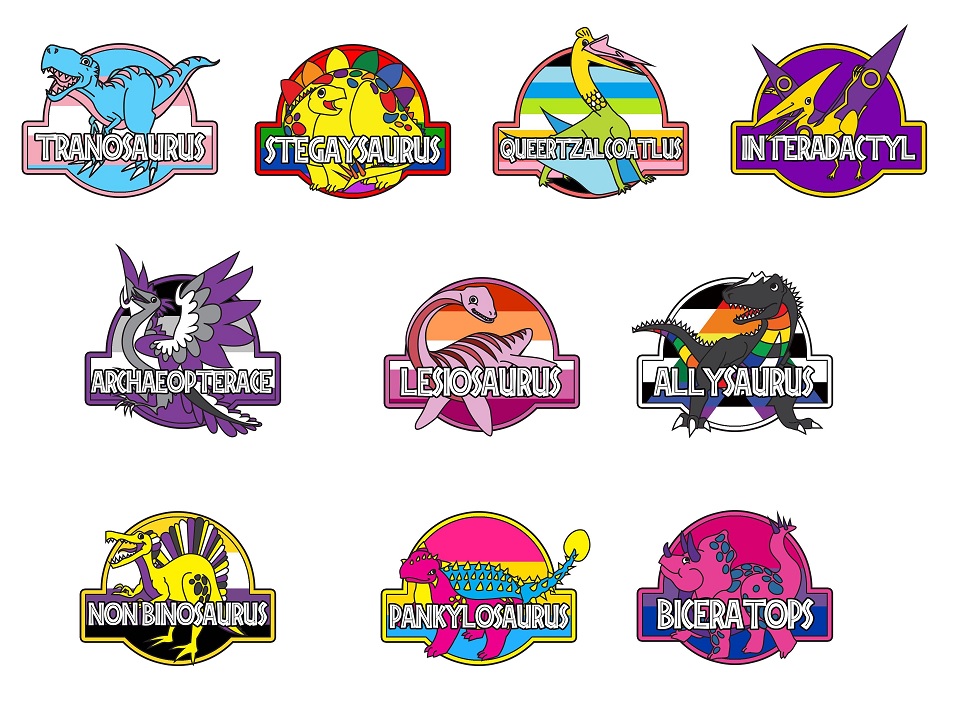 New Dinosaur-Themed Pride Pins Are The Cutest Lapel Jewelry Ever

Created by Australian singer/comedian Jordan Raskopoulos, Pridosaurs are an outstanding way to show your pride and your love of dinosaurs at the same time.

Dinosaurs are the coolest. If you doubt me, ask any six-year-old — they’ll tell you. And in keeping with their coolness, Australian singer/comedian Jordan Raskopoulos recently announced her brand new line of enamel pins: Pridosaurs.

According to Raskopoulos, the project began when she and artist Alex Clark were putting together a mascot for Raskopoulos’s Twitch channel. In keeping with Raskopoulos’s comedic work, the fact that she’s an out and proud queer trans woman, and the fact that she “bloody love[s] dinosaurs,” as she says in the Pridosaurs announcement video, they decided to create a transgender tyrannosaurus mascot called the Tranosaurus.

“People liked the tranosaurus, and so I thought, ‘Hmm, maybe I should make some tranosaurus merch,'” Raskopoulos said in her announcement video. “While brainstorming ideas, I managed to come up with some other dinosaur characters to represent different parts of the LGBTQIA+ community. Pretty soon, the tranosaurus was joined by nine friends: the Pridosaurs.”

Raskopoulos decided to turn all of these characters into enamel pins. “The pins will be nice and big –60mm, so you can see all the color and detail,” she said. And in order to fund the project, she announced an Indiegogo campaign on December 8.

Of course, as you might imagine, the campaign was immediately successful, reaching its goal within 24 hours of its launch. Raskopoulos had prepared for that possibility, announcing up front that “If we exceed our goal, we’re looking at producing a bunch more pridosaur merch, including patches and clothing, as well as new pin designs and variations with pronouns on them.”

Sure enough, four new pin designs have already been announced, as well as patch and sticker versions of the pins. The new pin designs include a trans-pride version of the Allysaurus, which Raskopoulos created for her own parents, as well as three totally new characters: an aromantic brontosaurus called Arosaurus, an agender iguanadon called Agenderdon, and a demisexual dimetrodon called Demitrodon.

There are still 26 days left to back the project on Indiegogo and pre-order your own pin or set of pins, so if any of these pins are relevant to your own interests or those of a loved one, get your orders in now! While they won’t be finished and released in time for this Christmas, they’ll make a great stocking stuffer in 2020, so order now and get a jump on next year’s Christmas list. By this time next year, you’ll certainly be glad you did.