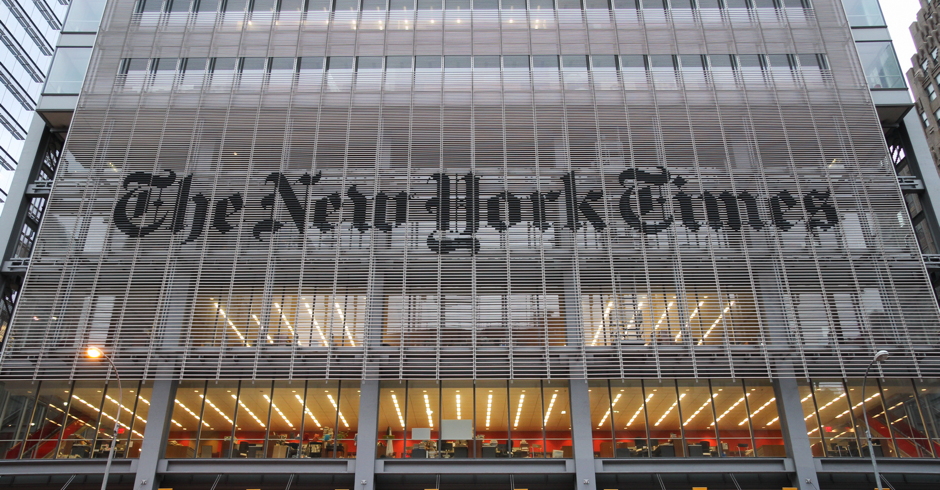 Some might say The New York Times is the king of normalizing views from the right, even views that could be considered disturbing or, in some cases, even dangerous to their fellow citizens, the nation, or the world. The Times’ pre-World War II profiles of a young Adolf Hitler are a legendary example.

In 2015 The Times republished what it calls “1922: Hitler in Bavaria,” patting itself on the back for getting “a lot of things right,” like its “description of his ability to work a crowd into a fever pitch, ready then and there to stage a coup.”

The Times that year also reported that “several reliable, well-informed sources confirmed the idea that Hitler’s anti-Semitism was not so genuine or violent as it sounded, and that he was merely using anti-Semitic propaganda as a bait to catch masses of followers and keep them aroused, enthusiastic, and in line for the time when his organization is perfected and sufficiently powerful to be employed effectively for political purposes.”

History knows how that turned out.

Fast forward to 2017, when The Times published a profile commonly referred to as “The Nazi Next Door,” originally titled, “In America’s Heartland, the Nazi Sympathizer Next Door,” which was written by Richard Fausset.

“Tony and Maria Hovater were married this fall,” Fausset’s story begins. “They registered at Target. On their list was a muffin pan, a four-drawer dresser and a pineapple slicer.”

“Ms. Hovater, 25, was worried about Antifa bashing up the ceremony. Weddings are hard enough to plan for when your fiancé is not an avowed white nationalist.”

A caption of a photo reads: “Mr. Hovater and others in the loosely defined alt-right movement are hoping to make their ideas less than shocking, even normal.”

Some felt The Times, intentionally or not, certainly appeared as if it were trying to lend a hand. And in fact, after massive outrage, which forced a headline change (along with removing a link it included to “a webpage that sells swastika armbands,”) the Times’ editors defended publishing the piece by saying they thought “it was important to do so.”

Between 1922, and 2017, and after, no doubt the Times has published other works that normalize the radical right, extremism, and fascism.

Earlier this year a Twitter user posted his take on how the Times in 1935 covered a “large anti-Hitler protest in front of a Nazi ocean liner.” [Tweet has been deleted, text is reprinted below.]

Ah, the NYT. Let’s never forget this headline from 1924, which I verified in the NYT database as authentic. pic.twitter.com/aRKgaAXZoJ

“22,000 Nazis Hold Rally in [Madison Square] Garden; Police Check Foes,” was a front-page headline in the Times about a stunningly disturbing NYC event in 1939.

“These 8 Conservative Men Are Making No Apologies” is the headline in Tuesday’s Times Opinion section. The piece is by the Times’ deputy Opinion editor Patrick Healy and the Opinion section’s editorial assistant Adrian J. Rivera. And while no one should make a comparison to Hitler or Nazis, the question some are asking is why did The Times think it important to profile a group of conservative men, since conservative men have pretty much been in charge for decades?

“There was no talk of a stolen election, no conspiracy theories about voter fraud or rants about President Biden’s legitimacy. Yet listening to our 90-minute focus group with eight conservative men, you couldn’t help but worry for our democracy a bit,” it begins.

“The men didn’t see themselves fitting into American society today. They didn’t feel free to be themselves in the culture,” the piece claims. “Seven of them said they felt like a stranger in their own country. At a time when democratic institutions are under pressure — and even under attack — and the United States feels so ununited, what causes these Americans to feel so alienated from America?”

The Times, to my knowledge, has never done a focus group of, say, eight LGBTQ men over 50. Or eight LGBTQ people of any age. What about doing a focus group of eight Northeast Democrats? How about visiting a diner and listening to supporters of President Joe Biden? Or Senator Elizabeth Warren? Or Reps. Jamie Raskin or Val Demmings?

When does the paper of record start highlighting views of people from the left, rather than a Nazi from 1922 or conservatives from 2022?

Again, The Times defends its piece, claiming these are “Americans whose voices are often not heard in opinion journalism.”

The Times apparently has never heard of Fox News, Newsmax, OAN, Breitbart, The Daily Caller, The Daily Wire, or Facebook.

The Times piece includes one hour and 22 minutes of audio it titled, “8 Conservative Men On Being a Man in America Today.”

To give a taste, here are some of the men and their top concerns about America or American society:

Joe says: “This is not the America I remember growing up in, and it’s just sad to see what’s going on.”

Robert says: “You’re not free to be yourself anymore because of crime. You’ve got to be concerned about ‘If I go out, am I going to be a victim of crime?’”

(Most crime is actually at historic lows, but you won’t hear that on TV or social media. The Brennan Center reports the “violent crime rate in the United States has decreased sharply over the past 25 years.”)

Later in the piece, Robert reveals, “I voted for Trump. I like Trump from when he was with ‘The Apprentice.’ I knew him as a businessperson. That’s why I voted for him. And then — oh, Lord — from church to every place, people just had a problem with it. You can’t have a different viewpoint.”

One interviewer asked questions like “What does it mean to be a man?” “Is masculinity important to you?” “Who would you all think of as good examples of masculinity or manliness these days? Who’s a good example?”

Responses to The Times’ piece were strong and appropriately unforgiving:

I mean, this is just Episode 1,826,736 of NYT’s storied “Midwestern Diner” series. But I did like this bit, because I think it gets to a bigger truth: they see other people living their authentic lives as a *personal attack* on them https://t.co/7343C0FYyw pic.twitter.com/eVG4Xd4hJU

Oh lord. @nytopinion‘s “focus group” with conservative men is so over-the-top whiny, entitled and sexist that even @patrickhealynyt concludes: “you couldn’t help but worry for our democracy a bit.” https://t.co/miDzk9okFh

The NYTimes did a focus group with 8 conservative men and it is so fucking disgusting. I dare you to read the whole thing without gagging. 🤢🤮https://t.co/Cq8e9RS7oY pic.twitter.com/6UIei3iVVI

There is no worse form of journalism than shoddily-conducted focus group journalism.

These 8 Conservative Men Are Making No Apologies https://t.co/Gu33ICF3fb

These are paragraphs of words that the most prestigious newspaper in the world decided are worth publishing today. https://t.co/qXICczKXrK pic.twitter.com/VSPIC7K1vC

These 8 Conservative Men Are Making No Apologies https://t.co/kKIB3lF9vm

NYT puts 8 conservative men in a room who “won’t apologize” for their views.

Dear readers, welcome to a conversation with the 8 most insufferable assholes you’ve never met. https://t.co/1qHanE1D6u

absolutely insane that the largest, most influential newspaper in the country (world?) continues to give legitimacy to the idea that all of these people *whose words are always in their paper* are not being sufficiently seen/heard https://t.co/gN4GzIiSQ2