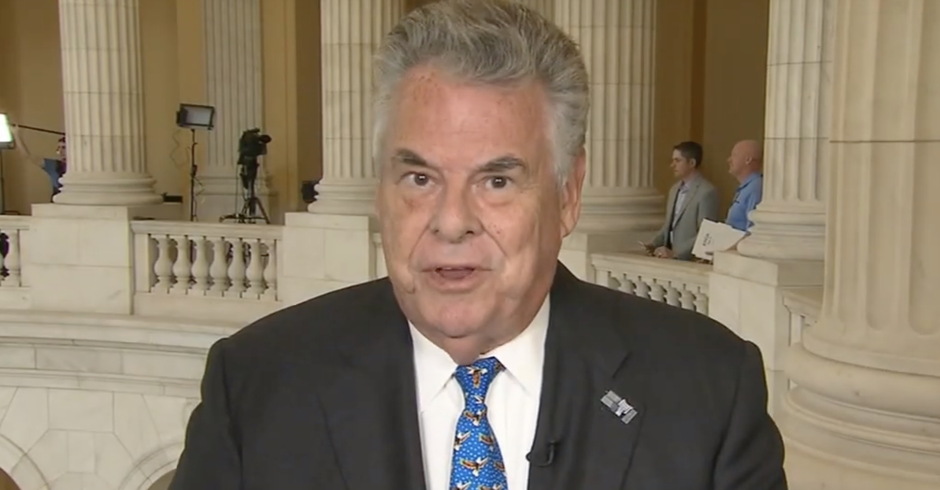 Despite Republican Peter King’s notoriously discriminatory record, Democratic Senator Chuck Schumer had nothing but praise for the long-running anti-LGBTQ Congressman — which didn’t sit well with a lot of Democrats.

The GOP mass exodus just picked up another major figure. Prominent and powerful U.S. Rep. Peter King, Republican of New York, has announced his retirement after 14 terms. King, who was twice chairman of the House Committee on Homeland Security, says he will not seek re-election.

King is the 20th House Republican who will not seek re-election.

Congressman King is a frequent guest on all the major cable television shows. A strong supporter of President Trump, he included in his statement Monday, “I intend to vote against President Trump’s impeachment and will support the President’s bid for re-election.”

King serves the people of New York’s 2nd congressional district, which includes densely-populated section of Long Island. The district was strongly Democratic, voting for Barack Obama twice, and for John Kerry and Al Gore over George W. Bush. But in 2016 King’s constituents voted for Donald Trump over Hillary Clinton, 53–44%.

Rep. King, a powerful Republican who twice served as Chairman of the House Homeland Security Committee, also has a record of ugly racism, anti-Islam attacks, pandering to the lowest forms of bigotry, and serving the powerful by demeaning minorities and the poor.

King last year defended ICE in the wake of the deaths of two migrant children. He also likened NFL athletes quietly protesting police violence and killing of Black people to giving a Nazi salute. And he declared there are “too many mosques” in America.

The Congressman from Long Island defended NYPD officers in the killing of Eric Garner, saying if the man who was placed in a chokehold (which violates police policy) had not been “obese,” he would not have died – while at the same time saying “police had no reason to know that he was in serious condition.”

King hunkered down to protect the moneyed interests, attacking the grassroots viral phenomenon known as Occupy Wall Street, calling it a “ragtag mob” of “anarchists.” He warned if the movement were given any “legitimacy” it could go on to have an impact on shaping policy. “We can’t allow that to happen,” he said, despite it having significant support across the country.

That’s just a brief and recent history of Congressman King’s remarks – his policy stances are an entirely different, albeit disturbing matter. He’s voted against the right of marriage and adoption for same-sex couples, and voted against banning anti-LGBTQ discrimination.

And there’s a lot more too, over his 28 years in Congress.

Democrats are now hoping to flip the district, which just moved slightly left to “lean Republican” after King’s announcement.

And yet, here’s Senate Minority Leader Chuck Schumer, a Democrat, whitewashing – or at least, ignoring or excusing – King’s abysmal record (and by tweeting from a right wing news source.) Senator Schumer’s “kind” words come just days before Trump’s public impeachment inquiry hearings – an impeachment King said in his retirement announcement he will vote against.

Peter King stood head & shoulders above everyone else

He’s fiercely loved America, Long Island, and his Irish heritage and left a lasting mark on all 3

I will miss him in Congress & value his friendship https://t.co/GSXizZ2c5D

Here’s how some are responding:

Blamed Eric Garner for his death at the hands of cops, saying he was "obese"

No, Chuck, just … no. I'm a voter and your constituent. I would gladly swap you for another Dem, and this makes that feeling more intense.

What in the name of God’s green earth is this fuckery.

That racist piece of shit has been a smoldering dumpster fire for decades.

Democrats need new leadership. This tweet…is stunning. Replace all the hateful conspiracy theories and fearmongering Peter King did of Muslims with any religious group, say Jews or Catholics, would Schumer tweet this? If so, why? Why would Democrats tolerate it? https://t.co/JzUEel8HaP

If you EVER wonder why I criticize Democratic "leaders"for enabling Republicans, look no further than this tweet.#PeteKing has praised Trump's immigration policy, and here is @SenSchumer fawning over his "principles."

With a score of 4 out of 100 from the @HRC for his voting record on LGBTQ rights issues, @reppeteking has been a stain on the New York Congressional delegation for decades. We look forward to seeing a Democrat in that seat that will stand up for all Long Islanders.