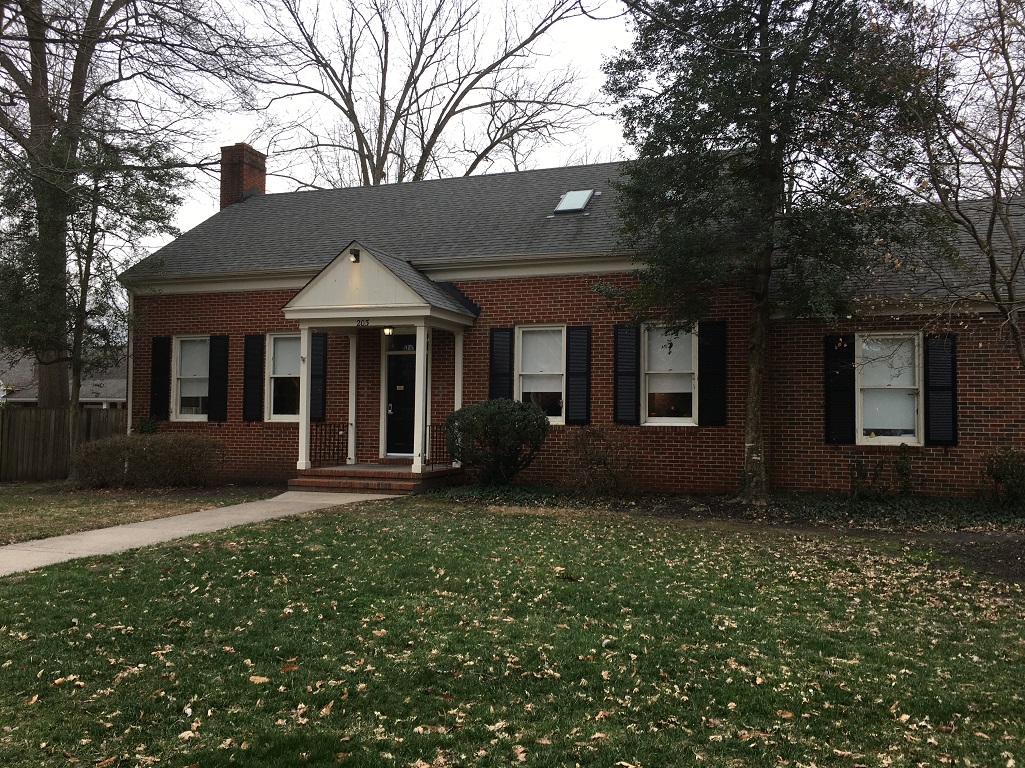 A small college in Ashland takes a big step forward by creating a haven for LGBTQ students, especially those who are transgender and non-binary.

At Randolph-Macon College in Ashland, there is a relatively-small brick house shrouded from the world by trees. Outside on the front lawn, a sign says “Special Interest House,” but the house is formally known as the LGBTQ+ LLC  (Living-Learning Community). The house’s RA, Spencer Dillon, feels a sense of pride whenever they walk into the house, because it’s a place for people on the LGBTQ+ spectrum to feel secure and welcome on the Randolph-Macon campus.

“Other groups of students on campus have places where they congregate and feel safe to them. The international students have the international house,” said Dillon, who is also the President of Randolph-Macon’s Pride Alliance. “And I thought, ‘That would be a good thing to have for our LGBTQ students, since any person, [regardless of] race or ethnicity, can be part of the LGBTQ community.’ It would be a good place for them. A landing pad.”

The living space previously housed Pre-Health Students and partnered with the Pre-Health Society at R-MC, but beginning in February 2019, it began housing around 16 LGBTQ+ students. The house includes a communal living room, upstairs study room, dining room, and kitchen. Most of the rooms are singles, but there are triples for those who wish to live with roommates. It also features two communal-style bathrooms.

Luckily, inside the house, there is a single-stall, private bathroom that serves as the all-gender bathroom and can act as accommodation for transitioning students. After almost a year, the process of settling into the house seems to have gone smoothly.

Bathroom access is one of many issues that college campuses need to address when it comes to housing transgender people. Many housing policies and practices put students in dorms with the assumption that they’d all identify as either male or female; in campus residence halls, the floors, hallways, or buildings are divided by gender, and often feature bathrooms and showers that are divided between male and female. This arrangement fails to serve students that are in the process of transitioning, as well as those who are non-binary.

While R-MC does have Co-ed dorm options, roommates are selected based on a person’s assignment as either male or female. The vast majority of students don’t bat an eye at this living arrangement, but for transgender and non-binary students, it can be difficult to navigate.

Dillon had a difficult time establishing themselves as a non-binary student. “I know that I personally wasn’t comfortable freshman year when I was put into an all-girls communal-style bathroom,” they said. “I didn’t feel like I would be unsafe, but I felt like my presence would make others uncomfortable, and that’s just not something I wanted to do.”

Many trans students share a similar feeling. It can be difficult to be in a space where you don’t fit into the binary mold. This can isolate and put pressure on transgender and non-binary students. And for students attempting to transition who’ve been assigned to live in a dorm that matches their assignment at birth, it can be difficult to have their gender taken seriously. Imagine the difficulty a young trans woman would face when she is assigned a male roommate and has to live on all-male dorm floor; it’s easy to imagine how this could put her in uncomfortable situations.

Having established themselves in a well-respected leadership position, Dillon nonetheless still felt out of place. So they decided to take action. “I didn’t want to be an RA of an all-girls hall again,” they said. “So, I went like ‘Hey I feel this way, there are others that feel this way. Can we do something about it?’”

Dillon then began the process of finding the right space for LGBTQ+ students. They initially spoke to their direct supervisor, Amy Miller, who is Coordinator of Residence Life, to get a second opinion on the matter. Miller believed it was an achievable goal, and was willing to offer support.

Dillon then spoke to the Assistant Dean of Students, Melissa Leecy, about the possibility of an LGBTQ+ House. “I went to talk to Dean Leecy and she said, ‘I’d hoped that you would come talk to me about this. I think it’s a good idea. Let’s see what we can do.’” This opened up a dialogue between Dillon, Leecy, and members of Pride Alliance, but Dillon wanted to gauge how the RMC student body as a whole felt about the possibility of a queer space. They were pleasantly surprised when many students expressed interest in the idea. The plan was in motion and there was widespread support.

Dillon then met with Leecy to discuss the available options, which included having pods — groups of room off of a central hallway — or having a floor in a multi-floor dormitory dedicated to LGBTQ+ students. They also did research into the way other campuses went about having LGBTQ+ housing, including VCU’s “Lavender House LLC,” a space open to first year students who are interested in a year-long LGBTQIA+ focused living experience, as well as the LGBTQ+-specific housing that has been established on several campuses outside Virginia. For example, Iowa Western Community College set aside 40 suite-style apartments known as the Pride Q*mmunity Cluster for queer students and to promote gender inclusion.

The process took a few months, and until the end of 2018, Dillon was unsure where they were going to end up. It was a difficult process managing communication and rounding everyone up, but finally, last spring, they were able to obtain a house.

Since this is the first year R-MC is rolling out such a program, it’s been a new experience for Dillon. Their sense so far is that the community at the house is good, but could be better. They hope to continue working with Pride Alliance to improve things.

They also wish to advertise it better. With Dillon’s busy schedule, it can be hard to spread the news of the house through word of mouth. Also, Randolph-Macon’s community is more welcoming to LGBTQ+ students than it once was, but since the LGBTQ house is just down the street from a row of fraternity houses, Dillon feels it’s safer for them not to fly a rainbow flag in front of the house. They’re not worried about someone harming the students because of it, but they think someone may try to take it down.

Dillon has talked to a few freshmen from Pride Alliance who would like to apply for special housing and have asked for information on doing so. There’s clearly genuine interest on campus in having a space where LGBTQ+ students can coexist.

Starting any new program is exciting and scary. However, Dillon has hope for the future of the LGBTQ+ LLC. It’s a small step, but for current and future LGBTQ+ students at R-MC, it’s an important one.

Helen is a writer and avid YA reader. She is Salvadorian but was born in New York and has lived in Virginia for most of her life. She is currently studying at Randolph-Macon College to get her degree in English with a Writing and Education minor.

CultureWorks Richmond has awarded grants to over 100 local artists whose livelihoods have been affected by the pandemic, prioritizing... READ MORE

AIDS activist, author of The Normal Heart, and ACT UP founder Larry Kramer will be remembered as a crucial voice in the early days of the... READ MORE

Driveway drag shows are showcasing Richmond's drag queens in a whole new light. Every business has struggled to adapt to the new normal... READ MORE

CultureWorks Richmond has awarded grants to over 100 local artists whose livelihoods have been affected by the pandemic, prioritizing... READ MORE

AIDS activist, author of The Normal Heart, and ACT UP founder Larry Kramer will be remembered as a crucial voice in the early days of the... READ MORE

Driveway drag shows are showcasing Richmond's drag queens in a whole new light. Every business has struggled to adapt to the new normal... READ MORE