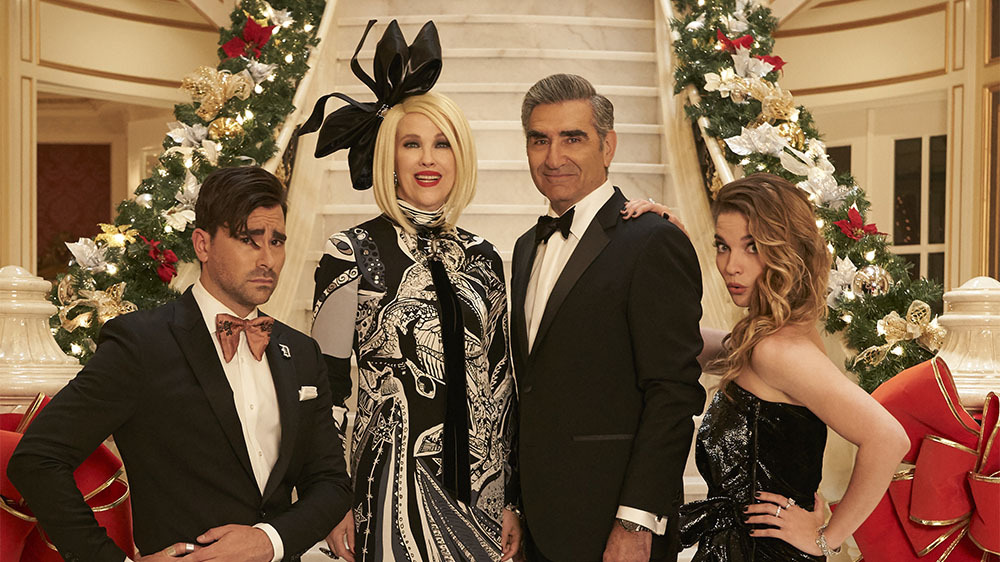 The Canadian series, which has steadily grown in popularity over its six seasons, features LGBTQ characters without giving us more of the same old depressing “after-school special” storylines.

Far away there exists a magical land in the north called Ontario, Canada. Within that land is a place of legend known as Schitt’s Creek. And it is the best television series that you are not watching (yet).

Schitt’s Creek is the brainchild of Daniel Levy, son of comedy legend Eugene Levy. It is possibly one of the most important television series in the last ten years, especially for the LGBTQ community. The series focuses on the Rose family — comprised of the patriarch Johnny Rose (played by the elder Levy), matriarch Moira Rose (Catherine O’Hara), David Rose (played by the younger Levy), and Alexis Rose (Annie Murphy) — and their fall from expensive, privileged grace. After the IRS comes banging on their door in the first five minutes of the pilot episode, the Rose family is forced to slum it in the titular Schitt’s Creek, a small, rural town that Johnny bought David for his eighth birthday as a gag gift.

The series was inspired by Levy’s time as a commentator for MTV’s The Hills Aftershow, when he wondered what it would be like if people who were raised with privilege were dropped somewhere where they had nothing and forced to start over. What might happen?

Aside from Creek’s reality show inspiration, Levy, who is gay in real life, also wanted to create a world where homophobia just was not an option. Too often, LGBTQ people in the media are forced through “very special episode” storylines, even on shows in which members of the LGBTQ community are the entire focus of the show. From repeated cover versions of the same coming-out story, to couples breaking up or watching partners die, to unsupportive or passive-aggressive family and friends, it feels like the community can’t catch a break, even in stories that are meant to be for us.

This even happens in shows that are seen as liberal, such as NBC’s Brooklyn Nine-Nine. Even that show dropped the ball on this one when Rosa Diaz (played by Stephanie Beatriz) was given the default “it’s a phase” reaction from her parents when she came out as bisexual. This implies, at least minutely, that our own allies might not support us when the cards are thrown on the table.

However, Levy believes that we have already seen too many of these storylines of LGBTQ folks enduring trauma and stress simply for being who they are. It’s about time for us to create the world we want to see.

“I have no patience for homophobia,” Levy told Vulture. “As a result, it’s been amazing to take that into the show. We show love and tolerance. If you put something like that out of the equation, you’re saying that doesn’t exist and shouldn’t exist.”

Levy’s David is openly pansexual in the series, but it never becomes a plot point. The only time it is acknowledged is when he and Rose Motel manager Stevie Budd sleep together. In what is now a classic and arguably viral scene from the series, Budd asks Rose to clarify if he is straight or gay while they are shopping for wine for a party, and Rose answers her questions in the only way he knows how.

“I do drink red wine, but I also drink white wine,” Rose explains. “And I’ve been known to sample the occasional rose. And a couple summers back I tried a merlot that used to be a chardonnay, which got a bit complicated. I like the wine and not the label, does that make sense?”

At the start of the series, the implication is that David is probably gay. He’s a fashionable hipster with rich, avant-garde taste, and flamboyant mannerisms. Not many straight men who are not of Scottish descent wear very many skirts (kilts, if you are from the highlands).

However, this was exactly why Levy wanted to have David and Stevie sleep together early in the series — in order to throw off the viewer’s perceptions. He told Them.us that setting up the narrative this way would help “subvert that [way of thinking] and show that you can’t always judge a book by its cover.”

Even when a storyline came close to being a “very special episode,” in very Levy style, a plot twist subverted this immediately. After David met and falls in love with his business partner, Patrick, Patrick’s parents came to town and accidentally learned that their son is gay. They had an immediate reaction of disappointment, leading the viewer to believe that this is leading toward another overtold story of parents being sad that their child is gay. But when David came to his beau’s rescue, he learned that the rescue is unnecessary; Patrick’s parents are not upset that their son is gay, but rather because they fear that they did something to make their son believe he could not tell them.

So while Levy’s intention was to create the world he, and all of us, want to see, in which homophobia is a thing we explain to our children as something that occurred generations ago in the past, there is an argument that this scenario is unrealistic. This fantastical world is just that, a fantasy, for many who do fear coming out to their families, friends, and their jobs. Coming out for many can mean isolation from loved ones, termination from jobs, and homelessness.

While that is unfortunately true, Levy makes an argument for the good that creating this intentionally blissful world can still do.

“As humans, we learn through osmosis,” Levy told Pride. “The more we see, the more we learn. By depicting a world where love between two people can only result in more love, I’m hoping to help change the conversation in people’s homes surrounding queer love.”

It is bittersweet that such a monumental series is finally achieving popularity as it enters its final season. Having premiered in 2015 on CBC in Canada in PopTV in the United States, it only began to finally get wider recognition in 2017 when it came to Netflix. And now it is heading quickly toward an end.

Thankfully, there’s still time to discover it if you haven’t; the last episode of Schitt’s Creek doesn’t air until April 7, and previous seasons can be streamed on Netflix. You should dive in if you haven’t already. Not only is the world of the Roses and the citizens of Schitt’s Creek incredibly infectious, it gives the rest of us a sincere hope for a world that just might not be so far out of reach after all.

Images from Schitt’s Creek via Netflix

As You Think I Am: Shakespeare Through an LGBTQ Lens

In this month's Amazon Trail, Lee Lynch works to get her house ready for the arrival of a new dog, even as the world outside her backyard... READ MORE

We sat down with City Council candidates Tavarris Spinks and Joseph S.H. Rogers to talk about their ties to Richmond, plans for their... READ MORE

As You Think I Am: Shakespeare Through an LGBTQ Lens

In this month's Amazon Trail, Lee Lynch works to get her house ready for the arrival of a new dog, even as the world outside her backyard... READ MORE

We sat down with City Council candidates Tavarris Spinks and Joseph S.H. Rogers to talk about their ties to Richmond, plans for their... READ MORE