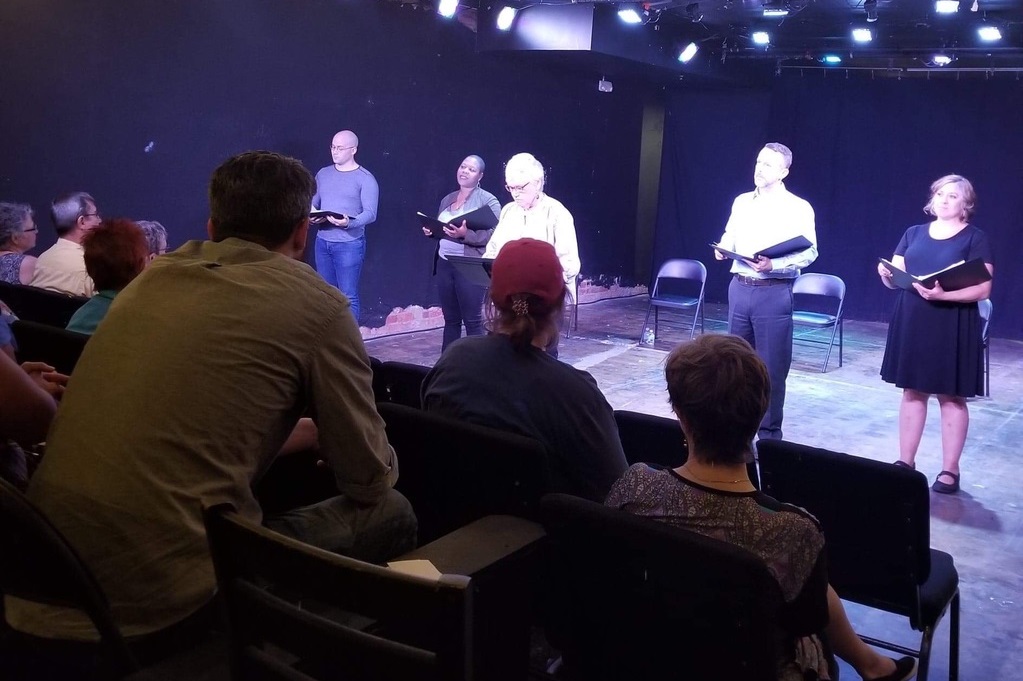 This Sunday at TheatreLAB, SHOUT! brings the voices of LGBTQ military veterans and families to the stage for one night only.

This Sunday night, TheatreLAB will present SHOUT!, a play focused around the stories of LGBTQ veterans and military family members. The play will only be showing for one night, but it took years of preparation.

Indeed, for Richmond artist and art teacher Lora Beldon, the roots lie in her childhood, growing up in a military family and experiencing the particular chaos that families of active armed services members undergo. Today, her artistic work revolves around bringing art to the children of military families in particular, under the name Military Kid Art Project.

“What I’ve done over the past 15 years is travel around writing creative programming for military kids’ classrooms,” she explains. “People hire me and i go into their business or place, whatever that may be.”

A few years ago, Beldon took an artistic residency at the Museum of the American Military Family in New Mexico, and it was from that residency that the initial roots of SHOUT! began to grow. Originally, it was a book, compiling the different stories military veterans and families had about their experiences with being LGBTQ in the orbit of the US armed forces.

The anthology that eventually resulted, edited by Beldon and Circe Woessner, was called SHOUT! Sharing Our Truth. It was very well received, winning the Albert B. Corey Prize from the American Historical Association in 2018. It was this success that led Beldon to begin thinking bigger.

One story from the anthology in particular stood out to Beldon. The story, written by a trans woman, told her story in two different voices — one male, one female. “Both the [museum] director and I said, ‘Oh my gosh, this would make a really great play!'”

Beldon approached LGBTQ-focused charitable organization the Arcus Foundation to transform SHOUT! into a play, and, she says, “They absolutely loved it.” Her next step was to contact TheatreLAB, where Artistic Director Deejay Gray was equally enthusiastic, connecting Beldon with Melissa Rayford, who took on the job of adapting SHOUT!‘s stories for the stage.

“We just threw ideas around,” Beldon says of the creative process. “She used quite a few of the stories. Some of the stories are an amalgamation — there are some parts of it where she used another story and tied it together.”

The end result, which is also directed by Rayford, features six different actors and actresses, each with their own unique story to tell.

“They represent different branches and different time periods — before, during, and after Don’t Ask Don’t Tell,” says Beldon. “But it’s not just a play about military personnel or veterans; it’s also about their families. So there’s a couple of military-brat characters, and that was a really important aspect to me. I’m always trying to bring to light military brats, as not being an afterthought in military families.”

Performers cover a full spectrum of age, race, gender, and experience; while some are veteran actors, others are just beginning their acting careers, and local artist Petie-Bogen Garrett has never acted at all.

“We did that on purpose,” says Beldon. “The entire play is what the museum and I consider an educational tool.” Their plan is to film the performance on Sunday night, then use it to create a package that can be distributed to schools, community centers, military bases, or whoever else would like to put on their own version of SHOUT!

It’s important to Beldon that this version of SHOUT! be affordable and accessible for all groups who might want to stage it. “We purposefully created the kind of cast, script, and backdrop that wouldn’t cost you a dime. If you wanted to do it outside, you could,” she says. “But it’s also something with great depth.”

While Beldon is excited for the TheatreLAB performance this Sunday, to her it is just the beginning of SHOUT!‘s life as a play. “I consider [Sunday’s performance] a soft opening,” she says. “We’re opening it to the public for the one and only time in Richmond that I will handle it. Then we’ll let it go out to the community.”

To see SHOUT!‘s maiden voyage into the world, head to TheatreLAB, located at 300 E. Broad St, on Sunday, September 22. Doors open at 6:30; tickets are $20 per person and are available at TheatreLAB’s website. Beldon encourages those who wish to see the performance to buy tickets in advance, as it’s close to selling out.