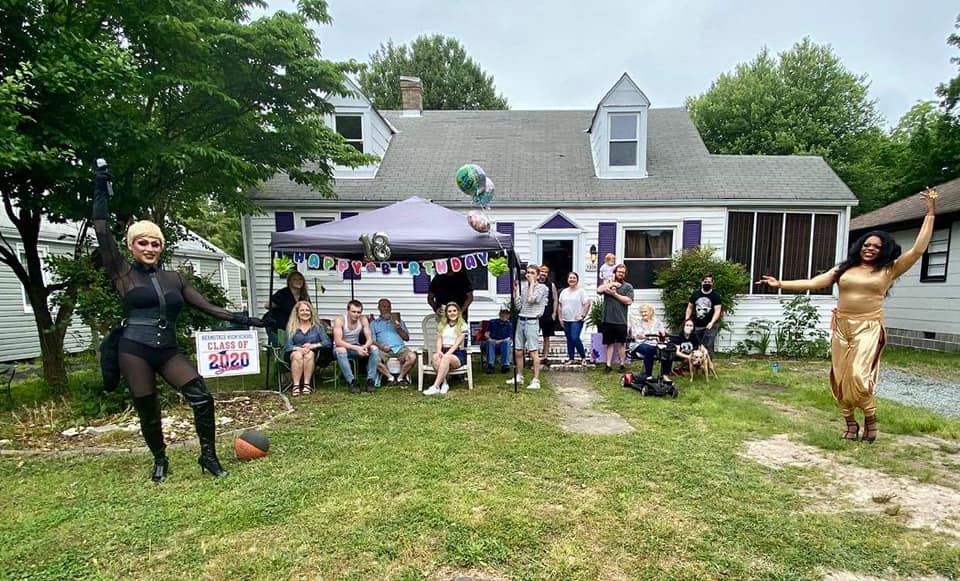 Every business has struggled to adapt to the new normal since the start of the COVID-19 pandemic. It has been no small feat for the businesses, restaurants, and entertainment venues of Richmond; from breweries to retail shops and everything in between, everybody is having to do their part to be safe and get creative when it comes to keeping the doors open, and Richmond’s drag queens are no exception.

Triple X Divas, the drag group that brings their nightlife show to Babes of Carytown each week, have had to think on their toes in order to continue entertaining the public. Instead of dancing for their patrons at 10 PM on Thursday nights, they’ve been forced to cancel shows and stay at home. But that didn’t stop them from wanting to bring a little bit of fierceness to the Richmond city area. Unlike restaurants and stores, which can still do takeaway and ordering online, the drag community has to get a little extra creative to continue doing business.

For Michelle Livigne, stopping drag shows didn’t seem like an option. She and her friends had to either come up with an alternative to their usual nightclub drag shows, or sit at home for months. Livigne, who started her drag queen journey over 12 years ago and is currently the director of entertainment for Triple X Divas, played around with the idea of a drag show that’s brought to the customer, instead of the customer coming to them.

“I was like, what if drag queens get together and get in a van on weekends and we go around to people’s houses and just start getting traction?” she said. “Like, we should totally do that.” While Livigne thought the idea would be a good one, she didn’t know the impact it would have until she quickly created a flyer and posted it on her Facebook page.

“It was like, 4:30 on a Wednesday when I posted this,” she said. “By nine o’clock that night, so many people had commented, and took it so seriously. It was a wild 24 hours — I had booked my first show and then from there, in 72 hours I had like 40 homes booked.” By a week later, she had booked over a hundred homes for one of the first Driveway Drag Shows.

The opportunity to bring shows to those sitting at home gives people a chance to get outside and take a break from their screens for some fresh air and live entertainment. Meanwhile, for Livigne and friends, bringing the show to the public is a lot of work — with no pre-built stage or lighting available, that means taking the equipment with them to set up in all sizes of driveways. But they don’t have a problem with doing a little extra work.

“In a nutshell, we pull up with a curtain, do two numbers, [and] take a picture,” said Livigne. “As soon as the curtain goes up, as we’re putting the final pieces together, we text them a message that says we’re ready. They’re coming outside within ten seconds, so we need the music ready for when they get out the door. The first thing they hear is the music and see the rainbow curtain.”

At that point, the show is on. “I have a speaker with a microphone now, so I go, ‘How are you today? Thank you so much for being in your own driveway, I know you traveled a long distance to be here,’” Livigne explained.

Having their own traveling driveway drag show has proved to be much different from the bar scene and nightlife the queens are so used to. Livigne notices a lot of differences when working with the public out of her usual element.

“That moment of meeting all of the people [at the bar] — you can go from not really feeling it and in a bad mood, but if you go out and you hit the stage, people are just hyping you up,” she said. But for driveway drag shows, “all that goes out the window. You don’t really have any ‘feeding-off’ moments. You have to really go off your gut. You have to keep telling yourself, ‘You’re doing great, they’re loving this performance.’ If you see them smiling, then everything’s fine.”

Changing from the typical drag show routine in bars and nightclubs has posed some challenges, and drag queens must adapt their routines to keep people safe. While a normal show in a bar might include taking tips from patrons’ hands, the queens must exclude that kind of interaction from their performances.

“We can’t take tips and goof around like we do sometimes,” Livigne said. “So you have to think on your feet a little bit more, be more theatrical.”

While Triple X Divas has changed their routine exponentially to cater to those wanting a show in their driveway, that’s far from the only thing the drag community is doing to change and adapt in uncertain times.

“[Drag queens] are really having to push themselves to just be cooler, more unique and interesting. They’re adding elements to their craft and just constantly adapting,” Livigne said. “We have some entertainers who are making music videos. Some girls started a Patreon and are putting out videos monthly. I did the ‘Drag Queen Story Corner’ on YouTube, so children had something to get into. People are having the opportunity to get to know us as people. We’re getting a lot more interactive with our social media.”

Although the pandemic has truly been a nightmare for everyone, Livigne has seen some positive impacts from the driveway drag shows that might not have been possible otherwise.

“I think the best things have been from the parents of children,” she said. “I met this family out in Mechanicsville, they have a transgender daughter that transititioned in the third grade. When we pull up, she was so decked out and her eyes were so big. She had a fun lipstick on, and a wig on — she was so freaking ready for the show. That little girl made me realize how strong and powerful I am. Her parents sent me a text message that said ‘thank you’ afterwards. Those little text messages are the ones that have the most impact.”

So far, Livigne has booked 118 homes, and the action isn’t slowing down yet. For the drag queens involved, the community support they’ve received has had a very positive aspect. And if they keep getting bookings, Livigne will keep doing shows, regardless of how hot the weather gets.

Republican Lawmakers Across The Nation Are Attacking LGBT...

In Florida, Gov. Ron DeSantis last month signed into law a bill that would prevent LGBTQ+ discussions in schools and will discourage... READ MORE

Republican Lawmakers Across The Nation Are Attacking LGBT...

In Florida, Gov. Ron DeSantis last month signed into law a bill that would prevent LGBTQ+ discussions in schools and will discourage... READ MORE