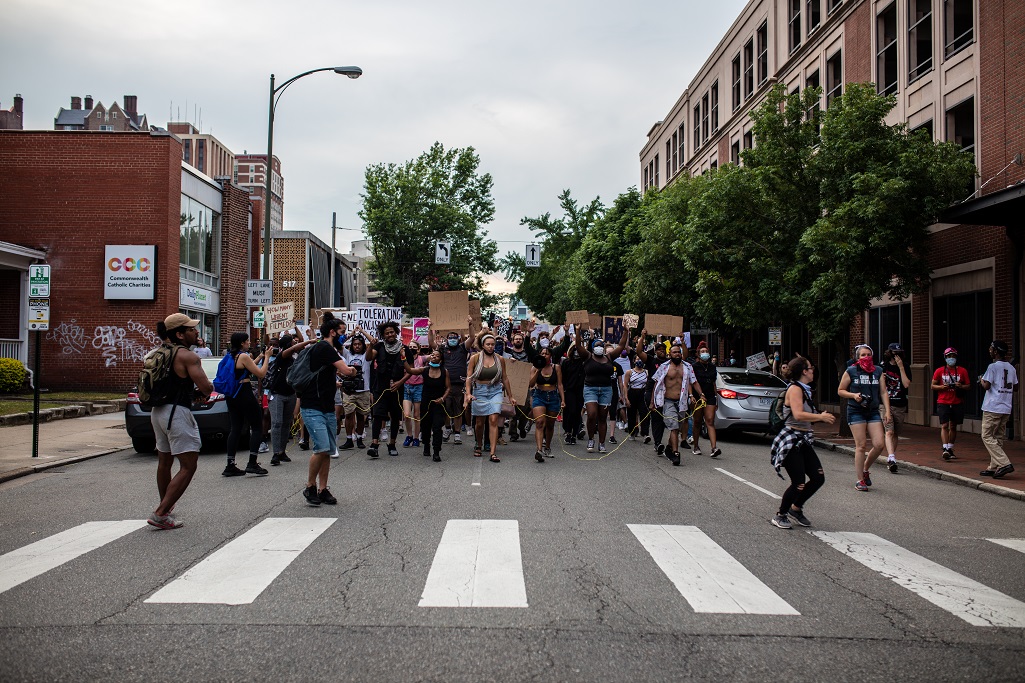 It’s Pride month, and in a time of frustration and action over police violence, local LGBTQ organizations are focusing their advocacy and support efforts on helping and uplifting the black LGBTQ community.

Tear gas and pepper spray sting the eyes of protesters. Masked individuals of all demographics hold cardboard signs reading “Black Lives Matter” and quirky meme slogans. They are a perfect picture of the people who are lining the streets of America, but more specifically here in Richmond — a place where dozens of LGBTQ organizations are attempting to celebrate Pride month in a time of a revolution, and lest we forget, a global pandemic.

Various LGBTQ organizations around Richmond are attempting in different ways to bring attention to these questions while doing their part to support the black community.

Side by Side, a local organization dedicated to offering support allowing LGBTQ youth to not only be themselves but also flourish, is speaking out, encouraging the city’s government to put the Marcus Alert into action and to implement the creation of a Civilian Review Board to oversee the Richmond Police Department.

The Marcus Alert will mandate that mental health professionals accompany police during any calls of a mental health crisis or wellness checks, as well as reforming the Crisis Intervention Training provided to law enforcement. Creating a Civilian Review Board would form an independent body made up of community members, particularly Black and Latinx, in an attempt to hold police accountable for their actions.

“We really wanted to think of tangible next steps that our city could take to better protect everyone,” said Ted Lewis, executive director at Side by Side. “The Marcus alert and the Independent Civilian Review Board are pretty basic asks of our city and our police department that would ensure better mental health and safety for everybody.”

In addition to making calls to support the Marcus Alert and review board, Side by Side has also converted its (currently virtual) support groups into conversations surrounding the Black Lives Matter movement, the killings, and the protests.

“We have a youth of color group that meets every other week, and so that’s a space specifically for LGBTQ youth of color to process,” Lewis said. “But we’re also working in majority-white youth group spaces to focus on how to combat racism and implicit bias and work towards an anti-racism way of being, if you will.”

These support groups have provided a space where LGBTQ youth can talk about their feelings, whether that be scared, angry, frustrated, or anything and everything in between. Lewis said for many kids and young adults, social media has played a role in anxiety and fear surrounding the killings and protests.

“I think that for black LGBTQ youth, there is the additional trauma and fear that comes with seeing the social media images of the killings, over and over again,” Lewis said. “While it’s important that that story be told, it can be traumatizing to see someone who looks like you die at the hands of someone who, in theory, is supposed to serve and protect you.”

Similarly to Side by Side, local LGBTQ organization Virginia Anti-Violence Project is also providing a safe space for members of the LGBTQ and black communities to unite and educate people during this time. Ebony Kirkland, program director at VAVP, said that, as an organization that’s staffed by black and brown people, it only seemed right to start conversations and provide a safe space for black members of the LGBTQ community.

Kirkland said it’s also VAVP’s duty to inform people about transgender black people who have been murdered by police, in addition to some of the more commonly known people that have been killed by police violence, such as George Floyd and Breonna Taylor.

Zakia McKensey, executive director at Nationz Foundation, an organization supporting the LGBTQ community by providing access to  HIV and STI testing, also finds it imperative that people realize that all black lives matter — no matter their sexual or gender identity.

“Tony McDade was also killed on May 27, who was a trans man, and you don’t hear anything about that,” McKensey said. “Nothing is being said about his life that was taken by police officers. And then to actually see a video from Minneapolis, Minnesota of a trans woman [Iyanna Dior] being attacked by 30 black individuals who were supposedly protesting, in a store, is frustrating.”

McKensey, being a black transgender woman herself, said until the cis black community accepts the LGBTQ black community, she’ll have an issue with “the whole Black Lives Matter movement.”

Over at Diversity Richmond, a long-running LGBTQ advocacy and support organization that funds other similar organizations, they’re using Pride month to not only support the LGBTQ community, but specifically the black LGBTQ community. They’re doing so by making all their newsletters and social media focus on race relations during the month of June. They’re featuring an annual event that they usually do in February as a part of Black History Month, their “Black and Bold” awards, where they recognize outstanding LGBTQ leadership of black LGBTQ leaders.

Diversity Richmond Executive Director Bill Harrison said that, while they’ve planned to continue to raise awareness and education through social media, they’re still brainstorming on what more they can do for the black community. Harrison said he’s dedicated to supporting this community and all intersections of it, but he’s always open to suggestions and ways to do better as a white man who will never truly understand the pain and fear black people go through on a daily basis.

“A few times in my life that I’ve been stopped by the police, I might have been mad with the cop because they caught me speeding, or I might have been mad with myself, but never once when I saw him approach me in my side-view mirror did I have a fear for my life,” Harrison said. “That is a very real thing that happens every day, and so when I hear white people say, ‘Just get over it. Why are you doing this? Why are you doing that?’ I just cringe, because I know that response is coming out of complete ignorance.”

While the nation is using this time to move forward and grow, ignorance is one thing that many leaders and executives are tirelessly attempting to extinguish. And ending ignorance takes effort, Kirkland explained. It’s not the job of the oppressed to educate those who aren’t being oppressed, but the other way around.

“I think folks should also look for the information. If you have a desire to learn more, then I think you should also educate yourself and look for other resources to help you understand other perspectives,” said Kirkland. “And not just go straight to that black person or that brown person to do that work, that labor, for you. Be willing to do that labor yourself.”

Due to concerns over COVID-19, VA Pride has announced that the 2020 edition of their annual PrideFest, originally scheduled for September... READ MORE

As Virginia slowly reopens in time for the summer, the pandemic is still a reality. Richmond’s Health Brigade is providing free testing... READ MORE

Last weekend's Stonewall Rising march was an act of solidarity by Richmond's LGBTQ community, which took this opportunity during Pride... READ MORE

Due to concerns over COVID-19, VA Pride has announced that the 2020 edition of their annual PrideFest, originally scheduled for September... READ MORE

As Virginia slowly reopens in time for the summer, the pandemic is still a reality. Richmond’s Health Brigade is providing free testing... READ MORE

Last weekend's Stonewall Rising march was an act of solidarity by Richmond's LGBTQ community, which took this opportunity during Pride... READ MORE