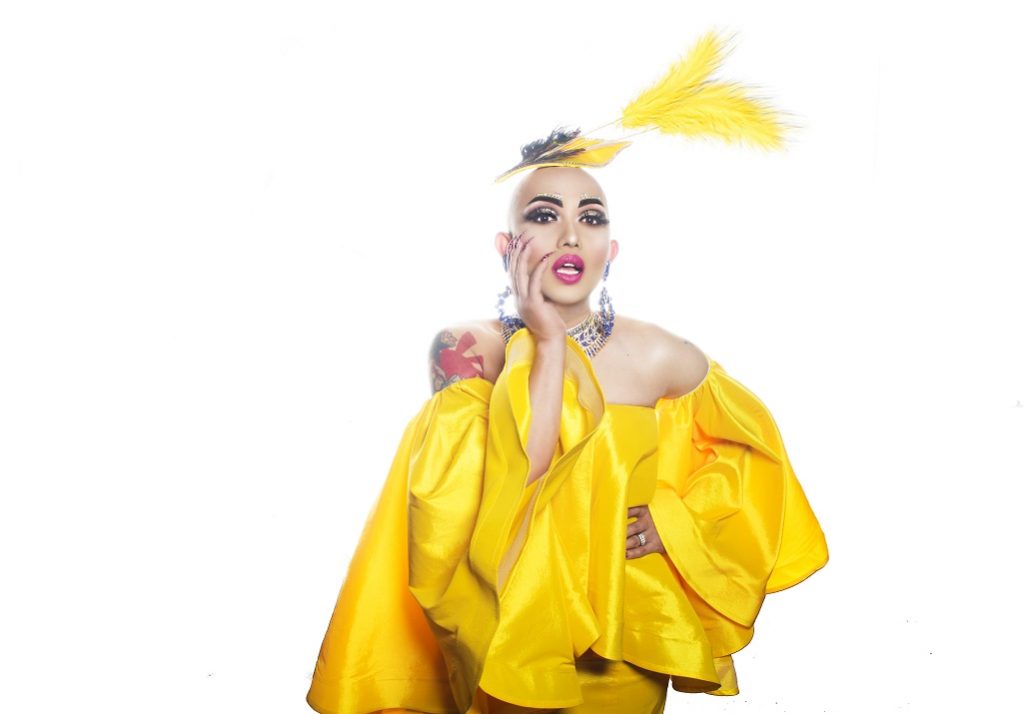 Our 2019 Fall Pride Guide, in collaboration with VA Pride, comes out at PrideFest Saturday! In this article from the magazine, we talk to RuPaul’s Drag Race star Ongina, who will appear onstage at VA PrideFest this weekend!

Small in stature and bursting with star power, RuPaul’s Drag Race standout Ongina will take the stage with pride at the 2019 VA PrideFest.

Ongina, the stage name of Ryan Ong Palao, appeared on the first season of RuPaul’s Drag Race in 2009, skyrocketing her career and solidifying her status as a bona fide drag legend. She instantly set herself apart with her inventive, avant-garde fashion and the resilient positivity that she has come to symbolize.

“Ongina is very inspired by fashion and art,” said Ongina. “I normally use my bald head as a canvas for headpieces. Sometimes I’ll wear wigs, but no hair at all is kind of my trademark as a drag queen.”

Ongina’s resistance towards boxing herself into a specific style of drag is what keeps her moving forward, unbeholden to branding or expectation. Every look she turns out aims to surprise and inspire, and even after decades in the drag spotlight, she never fails to impress.

Ongina began experimenting with drag in 2001 by creating genderbending club-kid looks inspired by her immersion in raver culture while growing up in Seattle. It wasn’t until 2005, after she had moved to New York City and was working at the drag queen cabaret restaurant Lucky Cheng’s that she began doing female illusion.

“Now I’ve evolved to more of a full-fledged drag queen,” Ongina said. “But I’m always trying not to lose too much of my originality; where I’ve come from, how I’ve grown, and what my life has seen, traveled through, and become.”

The evolution of Ongina is evident; she is constantly moving forward, managing a drag career for over a decade without ever stagnating or losing the excitement that originally drew her to drag.

“I always try to challenge myself to elevate my drag and my persona by constantly trying different things and not being afraid of the risks I want to take,” she said. “I always want to do something different, to think outside the box.”

Ongina radiates charisma and stage presence, but making a career out of performing was never something she aspired to until she was launched into the public eye after her appearance on RuPaul’s Drag Race.

“I had a really successful career as a visual merchandiser, creating visual aesthetics in retail spaces. Then, I wanted to be an interior designer,” she said. “Drag was something I always did alongside those other things and now, it has evolved into something bigger and more of a business.”

While it has become her career in recent years, Ongina has never lost sight of the joy that brought her to drag in the first place.

“It’s something that I do truly enjoy doing, so it hasn’t felt like a responsibility to stay alive and pay my bills. I find it to still be artistic and fun,” she said. “Drag, for me, is an evolution of inspirations in my head that come from fashion, art, and pop culture. I’m able to translate that into my drag persona in a visual way, and that’s what’s so exciting to me. Drag can be anything; it changes and challenges. I love every aspect of that because I get to create, and creating is what I love to do.”

Each look Ongina crafts is bursting with innovation and artistry. Pulling from haute couture, visual art, and even interior design, the blending of inspiration and reference points ensure that Ongina’s drag is always new and individual.

“Being such a visual person and loving fashion was my first inspiration, it’s what drew me to drag. And second was the freedom I feel when I’m in drag and performing,” she said. “It’s an incredible feeling. It’s such an outlet.”

Her performance style, like her personality, is equal parts bubbly and edgy, effortlessly dancing through energetic choreography and flirtatiously sauntering across the stage, smiling at the cheering crowd.

“I get nervous. I get excited. I get a rush. I get exhausted. I get fulfilled,” she said. “Performing is one of the best feelings, when you are on stage and the audience loves you back. If I love my fans and if they love me back, that means I’m doing something right for them.”

Now, she is bringing drag into the forefront of her life, choosing to focus on drag as a full-time job. Turning a passion into a business can be tricky; it leaves space for stagnation and detachment. But Ongina takes these challenges on, headpieces first, by always keeping her eye on what’s next. She cites her love of performing to the newest radio hits as one of the ways she focuses on staying on trend… but with a twist that keeps true to her individualism.

“I try to stay relevant by reimagining some of the visual aspects of what I present on social media and in my life,” Ongina said. “Top 40’s gives me so much inspiration for my drag, to keep it new, fresh, and culturally relevant. I love Top 40’s, anything super fun and high energy. I like to believe I can dance, that I have rhythm. I know I’ll never be a pop princess, so that’s what I emulate on stage.”

Given the breakneck speed of the social media world, relevance is everything. Drag is quickly moving from the underground into the mainstream, and with Drag Race’s ever-growing audience, queens have more opportunities and bigger fan bases than ever before.

“Drag used to be taboo, and it used to be something people didn’t fully understand or accept,” Ongina said. “Now that it’s at the forefront of pop culture and social media, the audience is so much bigger, and they’re starting to understand more of what drag is.”

As drag, and Drag Race, grows in popularity, she works in equal measure to grow her audience and appeal to those new to the world of drag, while still keeping true to herself and the aesthetic that propelled her career when she first appeared on the show.

RuPaul’s Drag Race premiered on February 2, 2009, marking Ongina’s television debut. Though only appearing in five competitive episodes of the season, she quickly became a fan favorite for her avant-garde runway looks and strong performances in weekly challenges.

“Competing in season one of RuPaul’s Drag Race definitely opened my eyes to what my drag career could become,” said Ongina. “Coming into the competition and seeing the likes of Shannel, Nina Flowers, Tammy Brown — it gave the perspective for me that drag is truly so multidimensional. It’s not one thing or the other.”

“That really helped in creating Ongina now,” she continued. “I’m able to adopt that mentality and show people my versatility and the dimensions of drag that I can offer.”

It’s that adaptability and welcoming of change that has made Ongina so exciting to watch. On Drag Race, she demonstrated that she was ready to rise to any occasion and exceed all expectations while doing it. Experimental and endlessly watchable, her time on the show was enough to cement her drag legacy forever.

A defining moment from season one was Ongina speaking out about being HIV positive. In episode four, the queens filmed commercials for Mac Viva Glam, a makeup line that collaborated with RuPaul to create a campaign giving all of the lipstick’s proceeds to funds helping those living with HIV and AIDS. After winning the episode with a whimsical and uplifting commercial, Ongina tearfully revealed her HIV positive status, making for one of the most memorable and emotional points in the history of the show.

Her message of celebrating life spoke to viewers around the world and launched her into a role of advocacy for HIV awareness.

“Coming out as being HIV positive has given me an amazing platform to be somewhat of an accidental activist for HIV and AIDS,” said Ongina. “It’s something I took on and am proud of doing.”

Taking on a more active role in HIV/AIDS awareness and advocacy was something she found much easier once she had come out about her own status.

“Because of what happened on my season and coming out, it has helped me to be more open and talk more about the virus,” she said. “At that time in my life, in 2008, there wasn’t a lot of exposure and conversation surrounding HIV and AIDS. Being that I was given this platform, I’m happy to speak on it so I can continue to inspire people. Life truly is a celebration, no matter what unfortunate circumstances come into your life. I think that’s the message I convey in my drag… immersing yourself in what is good in your life, and really celebrating that.”

Future-focused as ever, Ongina has no plans of slowing down. She has so much more to give, to design, to say, and to explore.

“Now that I am somewhat of a TV personality and working as a drag queen, I aspire to continue working until someone tells me it’s over,” Ongina said. “I’m going to continue working, continue evolving and learning, and challenge myself, so I can showcase the best of me and what I want to give. That’s the goal — to continue to do what I love. And hopefully the audience loves it as much as I do.”

A bill that will outlaw the notorious "gay panic" and "trans panic" defenses is headed to Governor Northam's desk for his... READ MORE

The bill, introduced by state Senators Mamie Locke and Jennifer McClellan, would halt a variety of ways that Virginia's legal system... READ MORE

In order to increase their impact in the Richmond Region and the Commonwealth, Diversity Richmond and VA Pride have joined forces and will... READ MORE

A bill that will outlaw the notorious "gay panic" and "trans panic" defenses is headed to Governor Northam's desk for his... READ MORE

The bill, introduced by state Senators Mamie Locke and Jennifer McClellan, would halt a variety of ways that Virginia's legal system... READ MORE

In order to increase their impact in the Richmond Region and the Commonwealth, Diversity Richmond and VA Pride have joined forces and will... READ MORE