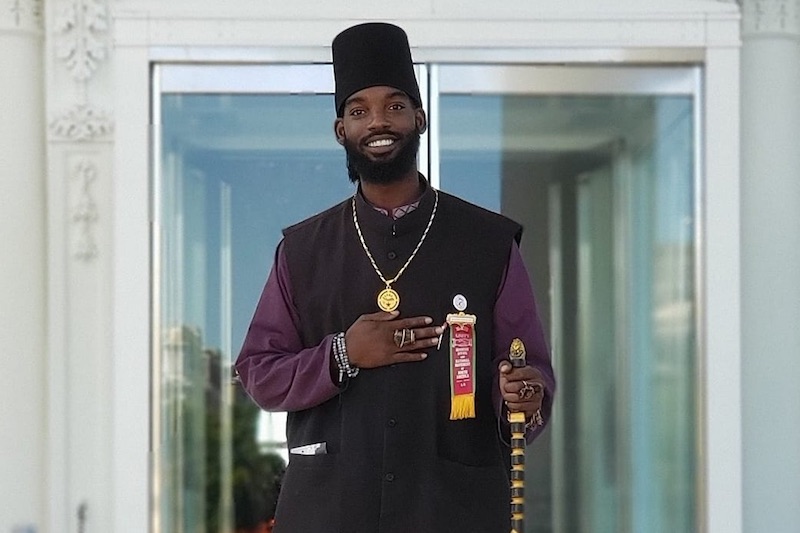 UPDATE, October 30: LaKendrick Coburn El, who also goes by Kenick El, announced Friday that he would resign from the Virginia Beach Human Rights Commission after the widespread public outcry condemning an anti-LGBTQ post he made on Facebook last week.

“Everybody’s human rights is to be respected,” El said Friday, according to WTKR. “We are to love one another, we are to show mercy and forgiveness to one another, and that’s why I am committed to resigning on October 31 at the end of the commission meeting after I share my views with my colleagues.”

The commission had scheduled a special meeting for Thursday, October 31 after news broke of El’s social media post. El says he will resign from the commission following the meeting.

During a press conference on Thursday, Virginia Beach Mayor Bobby Dyer addressed El’s comments, and called it inappropriate for him to continue serving on the city’s Human Rights Commission.

“We believe the public comments of Brother LaKendrick Coburn El are contrary to these base goals that are the core of the Human Rights Commission, and it is no longer appropriate for him to serve in this capacity,” Dyer said, according to WTKR.

The Virginia Beach Human Rights Commission also released a statement saying that El was speaking for himself, and that his words did not represent the commission. “The Human Rights Commission is a very diverse group of individuals who come together for common good and equality for all,” the statement read in part. “However, each commissioner has individual beliefs, and we do not always agree.”

News broke yesterday that Kenick El, a member of Virginia Beach’s Human Rights Commission, made homophobic and transphobic comments in a Facebook post, calling homosexuality “an abomination to the Human Race” and referring to transgender women as “men in dresses.”

El’s post was in response to a news article posted in October of 2017 by Fox News, with the headline “Transgender Wyoming woman convicted of sexually assaulting 10-year-old girl in bathroom.” The incident involved a transgender woman named Michelle Martinez, who, according to the Fox News article in question, “is a family friend.” Fox News reported that Martinez “invited the girl into the bathroom of a home on March 23, and touched her breasts and genitalia before penetrating her.”

Now, of course, that’s ugly and upsetting, and nothing any self-respecting member of the LGBTQ community would want anything to do with. However, this incident has been used by right-wing blogs like Louder With Crowder and The Daily Wire as an argument against transgender people being allowed to use the appropriate bathrooms. Those blogs tend to leave out that the incident occurred in the bathroom of a private residence, and that Martinez had been a family friend — one with a prior record of violence, as she’d previously been charged with aggravated assault in an incident in which she beat her boyfriend with a metal broomstick.

In his facebook post, El was making the same argument — that this incident had some bearing on the safety of cisgender girls and women in public bathrooms used by trans people.

“This is why we need to stop giving men in dresses passes. I have daughters and I won’t accept them sharing a restroom with a grown man suffering from this mental illness. Men trying to be women and women trying to be men is really confusing our children and I’m tired of seeing this nonsense promoted to our children,” El wrote on Facebook. “Those that don’t make children can’t relate or understand the impact this behavior has on us with children and it’s really getting out [of] hand.”

He then continued on to a general condemnation of LGBTQ people, writing, “Homosexuality is an abomination to the Human Race and it corrupts the hermetic principle of gender by interfering with the laws of nature just to gratify the lower self. Enter the correct bathroom and stop pushing this agenda on our children.”

Usage of the phrase “hermetic principle of gender” refers to the religious tradition of hermeticism, which believes that there is, according to Wikipedia, “a single, true theology that is present in all religions and that was given by God to man in antiquity.”

Kenick El’s references to religion make sense in light of the fact that he is a clergyman himself. He’s currently Grand Sheik and Divine Minister of Unity Temple No. 14 — a Virginia Beach-based temple of the Moorish Science Temple of America. This offshoot of the Islamic faith is based on the principle that African Americans are descendants of the biblical kingdom of Moab, and shares common roots with the Nation Of Islam.

LGBTQ organizations in the Hampton Roads area, including the LGBT Life Center, Hampton Roads LGBTQAI Interfaith Group, and Hampton Roads Business OutReach (HRBOR), have called for El’s removal from the Virginia Beach Human Rights Commission in light of these statements. However, El told Norfolk’s 13NewsNow that “this has been blown out of proportion” and went on to say that “I don’t intend on quitting or resigning.”

Despite El’s Facebook comments, and his insistence in 13NewsNow’s interview that his expression of said believes simply constituted him “[telling] you the truth,” he has shown support in the past for the LGBTQ community in his role on Virginia Beach’s Human Rights Commission, previously voting in favor of a resolution that asked the General Assembly to ban conversion therapy.

In a subsequent Facebook post, according to Metro Weekly, El insisted that he was merely expressing his personal views on his personal Facebook page, and that those views didn’t interfere with his work on the Virginia Beach Human Rights Commission. However, as LGBT Life Center CEO Stacie Wall told 13NewsNow, “We believe that somebody who believes that, the way that he does, is not someone who would represent all Virginia Beach citizens.”

At this point, it remains to be seen how the government of Virginia Beach will handle this situation. For now, we can only hope that El’s views do not continue to hold influence over the actions of Virginia Beach’s Human Rights Commission.