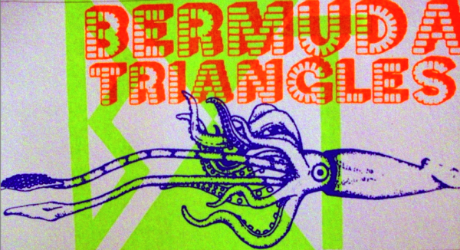 A Chaotic Descent into a Post-Apocalyptic-Tropical Sound: An Introduction to Bermuda Triangles

In the Richmond musical community, Jason Hodges may be as active as you get. Not only does he currently participate in the bands the Amoeba Men and Suppression, but he also runs locally based record label CNP Records. Hidden in the shadows of late-night sessions was his solo-moniker: Bermuda Triangles. Led by a desire to create a style of music that quenched his thirst for the percussive side of life, he put out two seven-inches with the groups Tickly Feathers and Yoko Boner. The genre, as described by Hodges, is “post-apocalyptic-tropical.”

In the Richmond musical community, Jason Hodges may be as active as you get. Not only does he currently participate in the bands the Amoeba Men and Suppression, but he also runs locally based record label CNP Records. Hidden in the shadows of late-night sessions was his solo-moniker: Bermuda Triangles. Led by a desire to create a style of music that quenched his thirst for the percussive side of life, he put out two seven-inches with the groups Tickly Feathers and Yoko Boner. The genre, as described by Hodges, is “post-apocalyptic-tropical.”

What started as a solo project was in need of a few serious changes in Hodges’ eyes. His thoughts were that “the first couple of solo performances didn’t sound very good or feel very good, so I got more people involved.” That’s where multi-instrumentalist Bill Porter and drummer Jared Young came in. With the addition of these new members, there is a mutual understanding about the style of music, and the mentality toward which direction to head.

Hodges feels that the songs have gone from relying heavily on simple electronic drums to taking on a busier identity. Subsequently, he’s capable of focusing his efforts on furthering the idea of the band. One particular thing he is trying to do is reinvent his voice. “I’m actually trying to sing as well. With the first releases, I was just doing this deep voice thing and kind of a creepy vibe lyrically. It doesn’t really sound like the same band anymore and I like that,” notes Hodges.

Another driving factor of the band is their unfamiliarity with the genre.

Shannon Cleary: In regards to both Jared and Bill, what elements do you guys bring into the fold with this lineup?

Jared Young: We all heard what Jason was doing and we really enjoyed it. We wanted to make it bigger and crazier.

SC: Has it been successful thus far?

Young: I mean we’re having fun. Fuck everyone else.

Young: This is the weirdest band I have ever been in. This is only the second band I have played drums in. I’m having a blast though. This is the weirdest shit I’ve ever done. At this point, I think we’re just letting it do it’s own thing. Now that we’re writing as a group, as opposed to when we first started, it was sort of a trial basis thing. Mainly, because Jason had all of these songs and we’d throw around ideas during practice. After we started playing more together, we started writing together and the songs became crazier and more fun. It’s still developing, hopefully it always will be.

Porter: This is the first band I have been in that doesn’t sound like what I’m listening to.

Jason Hodges: Well, what are you bringing to the table, Bill?

Young: Yeah, he doesn’t bring much at all (laughs).

SC: On some level, there must be some comfort there considering you and Jason have been involved in so many projects together up to this point. As far as bands are concerned, was it an easy, ideal choice to bring Bill into the fold?

Hodges: Yeah, I wanted to be in a band with Bill really badly again. It just ended up being the perfect timing.

Young: But you guys never worked on anything like this before, have you?

With their newest EP Giant Squid the band has certainly expanded on their sound compared to the Hodges’ solo effort, Terror in the Tropics. Even after witnessing a live performance by the band at The Triple, their sound still maintains the distinguishable chaos that a genre such as “post-apocalyptic-tropical” can promise, yet it makes more sense. One of the best tracks off the EP is “Riddles in the Sand” which begins with a familiar dissonance until transfiguring itself into a nice choppy dance beat with fitting tribal vocals by Hodges. For any fan of Hodges’ previous track record, this band surely offers a new twist to this mastermind’s creative output.

Following this release, yet another member was added to the outfit. Saxophonist Sean Cassidy plays a great role with the inclusion of this somewhat uncommon instrument for the genre. By distorting the saxophone with effect pedals, it feels well suited to the songs as opposed to jarring and out of place.

In the next year, Bermuda Triangles hope to put out another record and perhaps include a few of the songs off of Giant Squid. The EP was recorded on a four-track and some of the songs didn’t come out as strongly as they had hoped. Now comfortable with one another, the band is in a place where their creative environment allows them to develop new material at a steady pace. Hodges would love to put out a twelve-inch and perhaps depart from putting out CDs altogether:

Hodges: I think I really want to get away from releasing CDs. For the next Bermuda Triangles record, I want to do a twelve-inch and offer a download code or just put a CD-R in the packaging. It’s kind of weird now, like we may just release the next record digitally. Especially with the record sales of the last two releases, it’s difficult. The split seven-inch with Tickly Feathers sold really well and we used the money from that to fund the past two records. Those haven’t sold that well, so we’ll see what we can do in the future.

In regards to touring, the group will be on the road with fellow Virginians Head Molt in late August. Bermuda Triangles have already maneuvered their way across the country a few times now. In doing so, they have ventured to the Northeast and the South by Southwest festival in Austin, Texas with local Richmond band Snacktruck. On each travel, they returned with enormous tales that give insight into the personalities of the members of Bermuda Triangles.

SC: Two questions relating to touring, one of my favorite stories I have heard from you guys is a story about the song “Cannibal Island” and the reaction of the crowd on one of the first tours you did as a three-piece.

Hodges: With that song, we never really wrote an ending for it. So live, we kind of just keep going with it. So I had a set of shakers and I was crawling around on the floor, screaming Cannibal Island at the top of my lungs. I basically made my way to the door and ran outside. Then everyone chased me outside and we were all screaming Cannibal Island in the streets. It was pretty awesome. We were in the middle of the street and Jared and Bill were still inside. They were keeping the beat going.

Young: There was no one in the building, but we kept going.

Hodges: That was definitely the best show of that entire tour.

SC: The other question is how was the tour heading to South by Southwest with Snacktruck?

Young: Hanging out was probably the best part of that entire tour.

Hodges: It was like a vacation with shows in between.

Young: The last couple of days were the best. The drives were awful.

Hodges: The show in Birmingham was great.

Young: Jason had to take a tambourine out of my hand at one point.

Hodges: Yeah, he was fucking playing a tambourine during Snacktruck’s set and I could tell it was throwing them off. So I grabbed the tambourine and ran away with it.

Young: Sorry Snacktruck. We love you.

It’s not surprising to imagine a band as inventive as Bermuda Triangles to find it’s way out of the exciting thoughts of Hodges. If you examine the past, this seems like a suitable addition to the mindset he has always maintained concerning music. If their future undertakings of the band are any indication, hopefully they will find an audience with their unique brand of music. It would be a terrible shame to see a group this motivated, with such a distinctive style, disappear within the folds of the Richmond community. They are absolutely unpredictable live, which can easily be witnessed as Hodges finishes a set at the Triple by jumping inside of a drum and crawling around the floor of the venue screaming “Cannibal Island!” at the top of his lungs. This is a band that can’t and shouldn’t be ignored.

Listen to Bermuda Triangles here and check out the rest of CNP Records here.