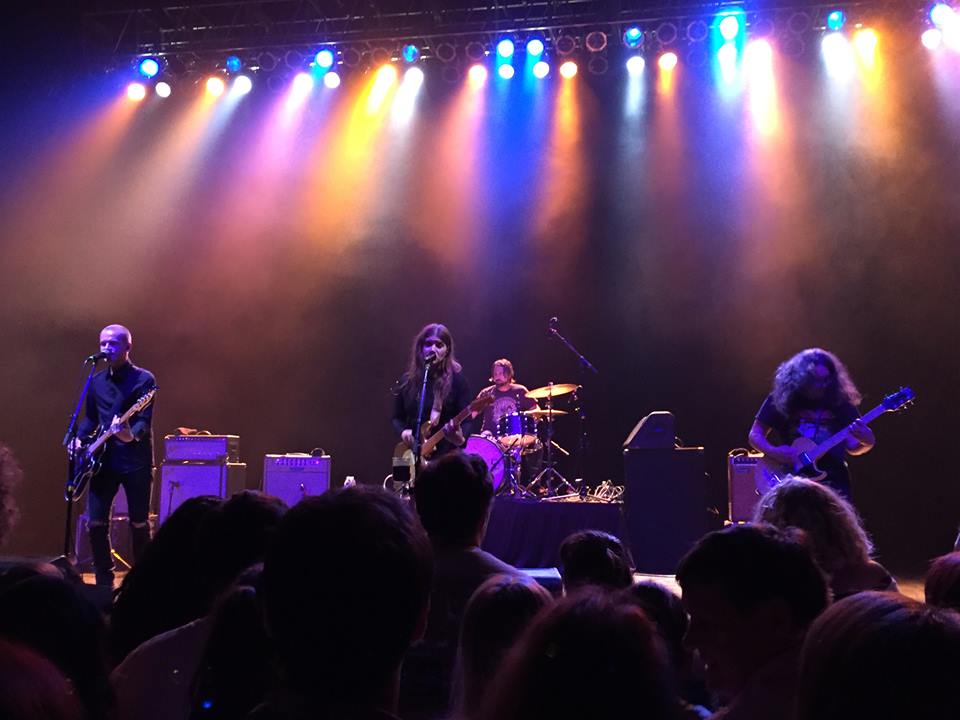 Best Coast delivers the hits, but offers up lackluster performance at Thursday’s show at The National

It feels a little wrong to shoehorn Best Coast as a summer band–something light and fun to listen to during warmer months–but there’s no denying their heavily surf-rock influenced sound evokes that feeling. So it comes as some surprise that when performing live Thursday night at The National Best Coast felt a little cold.

It feels a little wrong to shoehorn Best Coast as a summer band–something light and fun to listen to during warmer months–but there’s no denying their heavily surf-rock influenced sound evokes that feeling. So it comes as some surprise that when performing live Thursday night at The National Best Coast felt a little cold.

Opening for Best Coast was Brooklyn based group Sunflower Bean. It’s not a secret that most openers are forgotten as soon as the headliner comes on but Sunflower Bean made a strong case for itself, mixing strong and surprising riffs with dreamy vocals which made them sound as though they’d feel more at home on a bill with beach goth rockers The Growlers. Sunflower Bean kept the crowd fixed on them and visibility into their performance. After such a surprisingly well handled opening the bar was set high for Best Coast.

It’s hard to believe it’s been six years since Best Coast’s debut “Crazy For You” which came seemingly out of nowhere and captured hearts with its zero-irony beach rock sound. Hell, I still play the title track when riding down the road on a hot day. And maybe that’s part of the problem, with such early and defining success Best Coast hasn’t had the easiest time shaking off that sound. The band’s following albums–The Only Place, and California Nights–both helped to grow the duo’s sound but never quite captured as much attention as Crazy For You.

So when Best Coast took The National’s stage, a stage I’m fairly sure they sold out last time they toured Richmond, fans were expecting a certain musical aesthetic and energy that the group has either moved past or is unwilling to give anymore.

Vocalist/guitarist Bethany Cosentino alternated between seeming like she wanted to be anywhere else to looking genuinely into her performance, sometimes a change that would happen mid-song. Cosentino shared stories from the last time she toured Richmond, including playing flip cup with Jim Bean and apologizing for a roadie who threw up backstage before adding, “Fuck that guy”. It was in moments like this that Best Coast really shone, sharing a moment with the crowd before transitioning smoothly into one of their tracks.

Giving fair attention to the bulk of their discography, the loudest reactions from the crowd consistently came during performances off of Crazy For You. It was during these songs that Cosentino seemed less into her performance; if the rest of the group felt the same way they didn’t let on. In a moment of tongue-in-cheek self-awareness Cosentino attributed a quote to Fiona Apple, saying “I guess I have to play this song” before launching into the uber-popular “Boyfriend”.

To their credit the crowd appeared to eat it all up, dancing and singing along the entire show. Early tracks definitely elicited the strongest reactions but there were still people singing along to newer songs from California Nights.

Best Coast delivered a solid if somewhat uneven performance. Touring can be long and rough so I’m going to chalk a lot of the less satisfying elements to exhaustion, but it still makes me wish I could be seeing them in 2012 again.