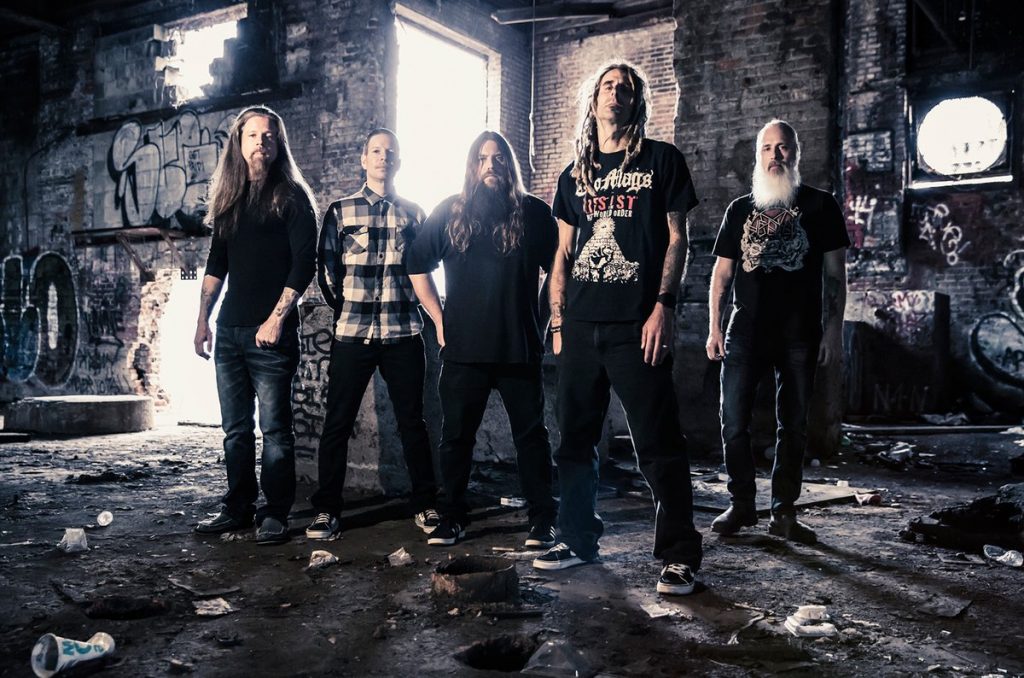 The name Burn The Priest might not be all that familiar to the denizens of today’s local music scene. After all, it’s been nearly 20 years since the band changed their name to Lamb Of God, and their fame has grown by leaps and bounds since. But if you were paying attention to the underground world of heavy music in Richmond in the 90s, you knew Burn The Priest was essential listening long before they changed their name.

Now, for the first time in two decades, Lamb Of God has returned to their original name for Legion: XX, an album of covers released last week on their longtime label, Epic Records. The album’s name seems to refer to Legion Records, the label that released Burn The Priest’s only previous LP in 1999 — 20 years before Legion: XX‘s release. But why return to the name Burn The Priest at all?

“The idea of doing some covers has been in our head since we were Burn The Priest,” vocalist Randy Blythe told me when I caught up with him. “But I think the main reason why we wanted to call it Burn The Priest is just because a lot of this stuff was music we were listening to when we formed the band.”

Blythe makes clear that to the members, the band is the band, regardless of which name they use. “Burn The Priest never broke up,” he said. “To us, there’s really no separation. We’re the same dudes, so we’re like, ‘Whatever, killer. This is music we were listening to at that time, so we’ll use our other name.'”

If you’re just thinking of Lamb Of God — er, Burn The Priest — as a metal band, the selection of songs they chose to record for Legion: XX might be a little surprising. The track listing is a mix of 80s hardcore classics and early 90s alternative rock touchstones, but doesn’t really feature any metal tracks — the closest is probably their cover of SOD’s “Kill Yourself.”

To Blythe, this makes perfect sense. “All of the music we covered is an offshoot in one way or the other of the punk rock scene,” he said. The members of Burn The Priest never expected to find themselves where they are today — a veteran metal band often given credit for helping start the New Wave Of American Heavy Metal movement. “When we started the band, we were never like, ‘Oh, we’re gonna go on to tour with Metallica, and go around the world!’ or whatever,” Blythe said. “We just wanted to be able to play with Sliang Laos or Kepone at Twisters.”

Twisters is now known as Strange Matter, and Kepone — the 90s-era project of GWAR’s Michael Bishop and celebrated local artist Ed Trask — has played a series of rapturously received reunions over the past five years or so. But Sliang Laos, a Richmond band active in the early 90s who became a crucial influence on Burn The Priest’s early sound, is all but forgotten today.

On Legion: XX, Burn The Priest does their best to change that, covering Sliang Laos track “Axis Rot.” “It was the cover we probably altered the least,” Blythe said. “It’s such a brilliant tune, so we wanted to do a faithful version of it, and hopefully expose that music to a wider audience.”

The Burn The Priest version of “Axis Rot” will actually be the first to see the light of day, even before the original. “We have the Sliang Laos album, and I’m sure other people in Richmond have it, but that song was never released,” Blythe said. Indeed, he and the rest of Burn The Priest hope that by covering the song, they can change that. “My dream is to find some… it doesn’t have to be a big record label, but maybe a medium-sized or small record label, and get someone to put out the Sliang Laos record. I’ve had it for years and it never came out, and I think that music needs to be heard. So if anyone reading this wants to put out the Sliang Laos record, hit me up!”

The Sliang Laos cover recently gave Blythe and the band the opportunity to reunite with Sliang Laos vocalist Andrew Siegler, who came to see Lamb Of God twice on their recent tour. “I hadn’t seen him… oh god, in like, 20 years or something,” Blythe said. “He was such a big influence on me as a frontman. A lot of the weird creepy shit you see me doing directly comes from him. And we opened with a song called ‘Omerta’ [from 2004’s Ashes Of The Wake], and there’s parts in that song that are directly Sliang Laos ripoffs, even in the guitar style. All of us used to go see Sliang Laos, and that certainly filtered into our music, so it was cool that night to open up with that song.”

Backstage, the band played Siegler their cover version. “He really dug it,” Blythe said. “Me and Mark both really wanted to do that song. It was us showing respect to Richmond as well, because there’s so many great musicians, particularly around that time, in Richmond.”

The band’s influences from beyond Richmond are reflected in the covers chosen for Legion: XX as well. Blythe has never hidden his huge love for DC hardcore pioneers Bad Brains, and it shows in Burn The Priest’s cover of “I Against I.” “They’re my favorite band of all time, and they’re friends of mine. It was really important for me to get that one on there,” Blythe said. “We’ve been talking about covering [that song], maybe since we were Burn The Priest? I remember, clearly, sitting in a truck with Mark up in the mountains — we were all up there camping — and listening to the song ‘I Against I,’ and I was singing along with it. He was like, ‘Damn, you can sing that, we should actually cover it.'”

But Blythe wasn’t the only one picking songs for the album, and at least one of the choices threw him for a loop. “I came to the studio one day, and they were like, ‘We recorded “Jesus Built My Hot Rod” by Ministry,’ and I was like, ‘You did? Really?'”

Blythe is a Ministry fan, but “Jesus Built My Hot Rod” is not the song he would have picked. “I would have chosen something off of Land of Rape and Honey, or The Mind Is a Terrible Thing To Taste — something a little bit more abrasive and political,” he said. “I was really reticent about it. Because — with all due respect to [Ministry leader] Al Jourgensen, I think he would agree — that’s a really silly song.”

The original version of the song mingles samples from drag racing footage and the 1979 film Wise Blood with vocals contributed by Butthole Surfers singer Gibby Haynes. “It’s nonsense. [Haynes] showed up at the studio drunk as shit, sat there and mumbled into the mic for a couple of hours, and Al Jourgensen spent two or three weeks editing tape to make the song,” Blythe explained. “So when they first told me they had done that song, I was like, ‘I don’t know about that. That sounds like a bad idea.'” He laughed. “And then I started recording the vocals for it, and it was just so much fun, it was ridiculous.”

Rather than re-using the samples on the original version, the members of the band recreated them in the studio themselves. “That’s one really cool thing about that song, is that it’s the only song in our band’s existence that has all five members of the band with a vocal part on it,” Blythe said.

The process of picking the album’s 10 songs also involved the entire band. “That was kind of the whole point of doing the whole thing, was for us to have some fun,” said Blythe. “Because there’s a lot less pressure when you’re doing covers. You already know the song is good.” He laughed. “It’s not like you have to write it and then question yourself.”

The album spans a good deal of territory, none of it predictable — but “Kerosene” might be the least predictable choice of all. It was originally recorded by producer Steve Albini’s 80s-era band, Big Black — a drum-machine fueled group with very little obvious resemblance to Lamb Of God, or for that matter, Burn The Priest.

But to Blythe, Big Black is an important piece of what made them the band they are today. “They’re just super cerebral. Really smart punk rock,” he said of Big Black. “They were the first band that showed me punk rock could be not just angry, but super smart at the same time.”

Blythe’s a pretty smart cookie himself; he’s shown himself to be a talented writer with his bestselling 2015 memoir, Dark Days. At one point during our conversation, I remind him of a much earlier writing effort — his mid-90s zine, Cruentus Odium, in which he was billed as “Randy Hatred.” While he chuckled embarrassedly at the mention that I’d seen his pre-Burn The Priest band, Furious George, he was not at all upset to think of Cruentus Odium. “Issue number four is in the VCU Zine Library, so if anybody wants to go check it out…” he said.

I mentioned that I traded him my very first zine, Nothing Is Cool, for a copy of Cruentus Odium at a show in 1995. “I think I remember it,” he said. “I probably still have it. I have a box of zines from those days.” I admitted that it wasn’t very good — an 18-year-old’s first stab at music journalism, writing about Lollapalooza and such. “That’s still the greatest thing about fanzines,” he said. “I miss that time.”

Blythe is still involved in solo creative endeavors, but these days, he’s focusing mainly on photography. “I’ve been shooting for about seven years now,” he said. “I just had an exhibit in the National Gallery of the Cayman Islands, and I have an exhibit coming up in the fall in New England.” Which raises an obvious question — when will he have an exhibit in Richmond? “Nobody has asked me!” he said, laughing. “People are like when are you going to exhibit in Richmond? And I’m like, when a gallery contacts me! I’m not gonna walk down Broad Street waving my pictures around, saying ‘Look at this!'”

The new Burn The Priest album, Legion: XX is available for purchase in vinyl, cassette, and CD formats from the band’s website. Check out Randy Blythe’s photography — and hit him up if you’re interested in putting out the Sliang Laos album or giving him a gallery show in Richmond — at his website, randyblythe.net, or on Instagram at @drandallblythe.