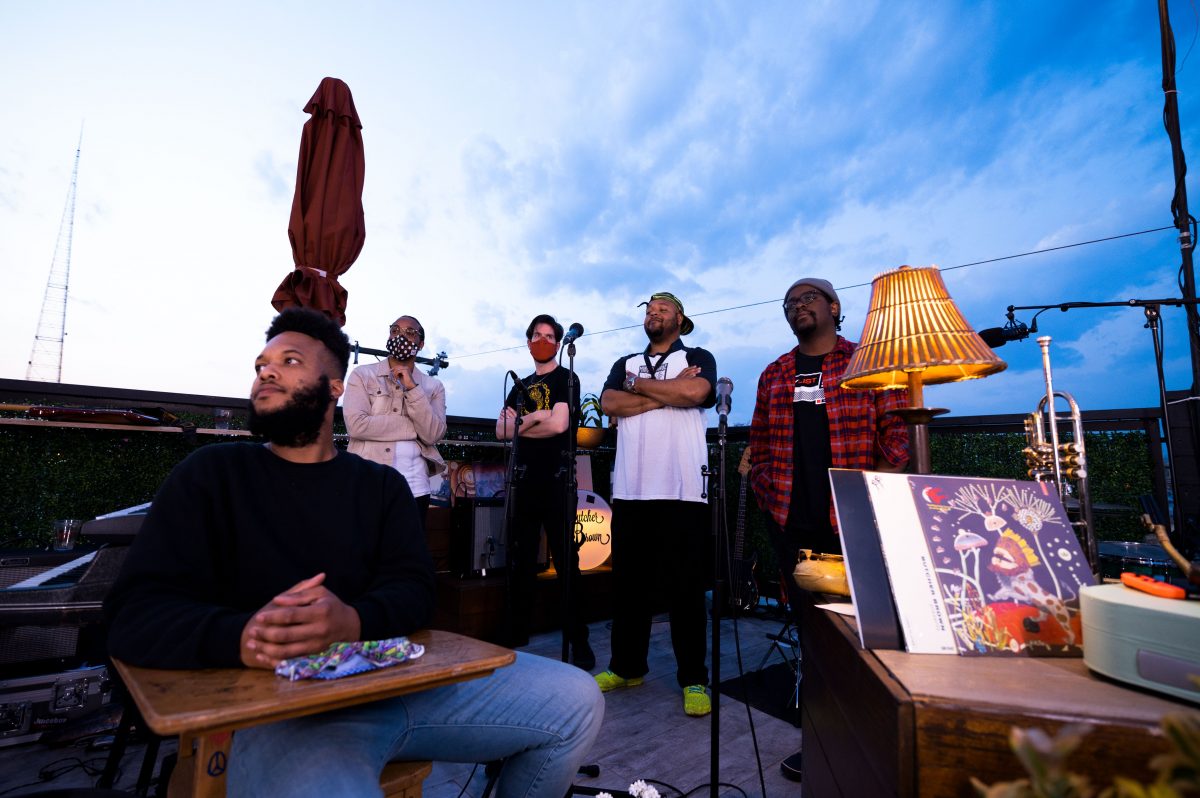 Richmond’s Butcher Brown has been on a roll as of late, which is impressive considering the worldwide lockdown, but they kept their music out there and grew their fanbase. Not easy.

The guys launched their YouTube series #MothershipMonday and stayed connected during the pandemic. They hit national level news when ESPN reached out to create the new pre-kickoff Monday Night Football hype song. And somewhere in there, they released a new album #KingButch to universal acclaim. The guys are on the way, way out there reaching the masses.

Luckily, I got to be a part of their newest project (thanks Joey!) that dropped yesterday on NPR Tiny Desk and was able to get a few moments with Marcus Tenney to get his thoughts on everything.

R Anthony Harris Marcus, I saw the video for ‘Gum in My Mouth’, which I thought was great, and now we are here together shooting your video NPR Tiny Desk! Seems like a good time to ask — what is going on with the band? What are your plans for 2021? What you are excited about?

Marcus Tenney We’ve been working on a lot of videos and focusing on video content. You know, we feel like everybody is in the house watching videos and all types of stuff like that, so we’ve been focused on trying to put our thing in video format, and getting used to documenting everything we do. So that’s been like a big focus.

And I feel like it’s crazy that it brought us here tonight because like you know we started doing videos at the top of the pandemic with #MothershipMonday. So that was us basically like we are gonna put up videos because we have no shows, and then that turned into all this and at the other side of the pandemic, we are doing a Tiny Desk — which is kind of crazy. That’s crazy.

RAH Did NPR reach out to you? How did that happen?

MT Corey put the feels out for that. He’s connected. You know running around the Earth. Before the pandemic at one point he was in China twice in two weeks.

RAH Like, he went to China, came back and then went back within 2 weeks?

MT Yeah, like he went to China, came back to wash clothes, and went right back. So you know, that type of networking, that’s Cory’s game in Butcher Brown.

RAH I haven’t had time to catch up with you since you guys got on Monday Night Football.

MT That was Chris Dunn, our A&R and producer. He was working on a project for Concord Records and they approached him and he was like, I know the band that can do it. So he was like I’m going to hook you up with this and that was a cool learning experience because we got to work with ESPN which was super duper cool but they was ready to move.

RAH You guys always rep the city and to see that happen for you made a lot of people around here proud. I had people asking me if I know you Marcus… (laughs)

RAH So the band has momentum. How’s the response been to #KingButch?

MT It’s been great. It’s been better than we could have ever thought. It’s hard because it’s all been digital. We haven’t really played, so to get any response at this point is magic, but the response we’ve got is insane. So we can’t wait to go out there and do the rest of the package.

RAH Are you planning any shows for this summer?

MT Yeah, we’re gonna inch back out there and see what gives. Everybody trying to figure out what parts on the ground are hard and soft. So we’re just gonna take everything we can. We are setting up a lot of home shows, and trying to get linked up with bigger shows, because you know we were in the process of that before. Everybody had to take some steps back.

RAH Yeah, no doubt. Are you trying to hit the road?

MT At some point, we want to hit the road but we want to do it smarter than we were doing it before. Because I really felt like we had like a lot of opportunities sitting on the table just the way we were moving. So we’re gonna reassess and see what’s going on. So, once we really feel like we know what’s happening and we really know how we’re supposed to move — and our road — we’re trying to jump back out, just as hard as we were.

RAH Maybe it’s a bit early but have you started thinking about the next album?

MT We’ve been doing sessions and been trying to stay in the studio every month, every couple months, just to stay fresh on that side. And then we’re doing videos and trying to do what we can to supplement the live show, but we actually have a lot of stuff that we want to put into the running for the next album. At this point, the way we operate with that is we’re just going to make a bunch of stuff and then there is a point where we sit down to figure out what’s actually going to be a part of the record.

RAH I’ve been listened to the album a lot. What are the band’s influences? What is everybody listening to?

MT I’ve been in school with Devonne ( DJ Harrison) since 2003 and were in our first band together, Bella Blue. We’ve been playing ever since, so I feel like ever since then we’ve had multiple influences playing freelance — so we had to play with the blue grass cats, we had to play with the hip hop cats, the rock cats, the jazz cats. So you pick up all this information when a lot of your other people was heavy in one field. So we just eventually took all of the pieces that we were left with and just put it into scene.

Now, I feel like the thing that steers Butcher Brown’s sound is like what do we feel like playing in terms of like — we’re gonna play this section like g-funk. Are we gonna play this section like rock and roll? We’ll play this section like that, and whatever that means to whoever, such and such might be pulling from John Bonham. Or he might be pulling from Herbie Hancock, but the topic of the conversation is g-funk or soul or neo-soul. I love that! That’s the crazy shit, because you can kind of like, it’s just like being with your friends — your real closest friends — you can act how you want to act, whenever you want to act that way and they always will make room for you. That’s exactly how it feels.

RAH And only put the coolest shit on the album.

People operate the same way with music. So with the weirder tracks, it’s like well we’re gonna try to put this out on this platform and see how it fit over there because we’re going to have you on this. And so that’s why we spent a lot of time with the pieces and really see what is the broad reach stuff what fits people and what’s gonna hit people the right way.

RAH Well, I appreciate the music. All success to you. I think this year is gonna be great.

MT  I think so. I’m looking forward to getting back out there and everybody is ready to get out. The Roaring 20s is coming. Pleasure talking with you.

Find more information on Butcher Brown at butcherbrown.com
Full disclosure: this video was shot and edited by Wharton Major, which is Joey Wharton and I.